"You're a Socialist, Fascist pig!" 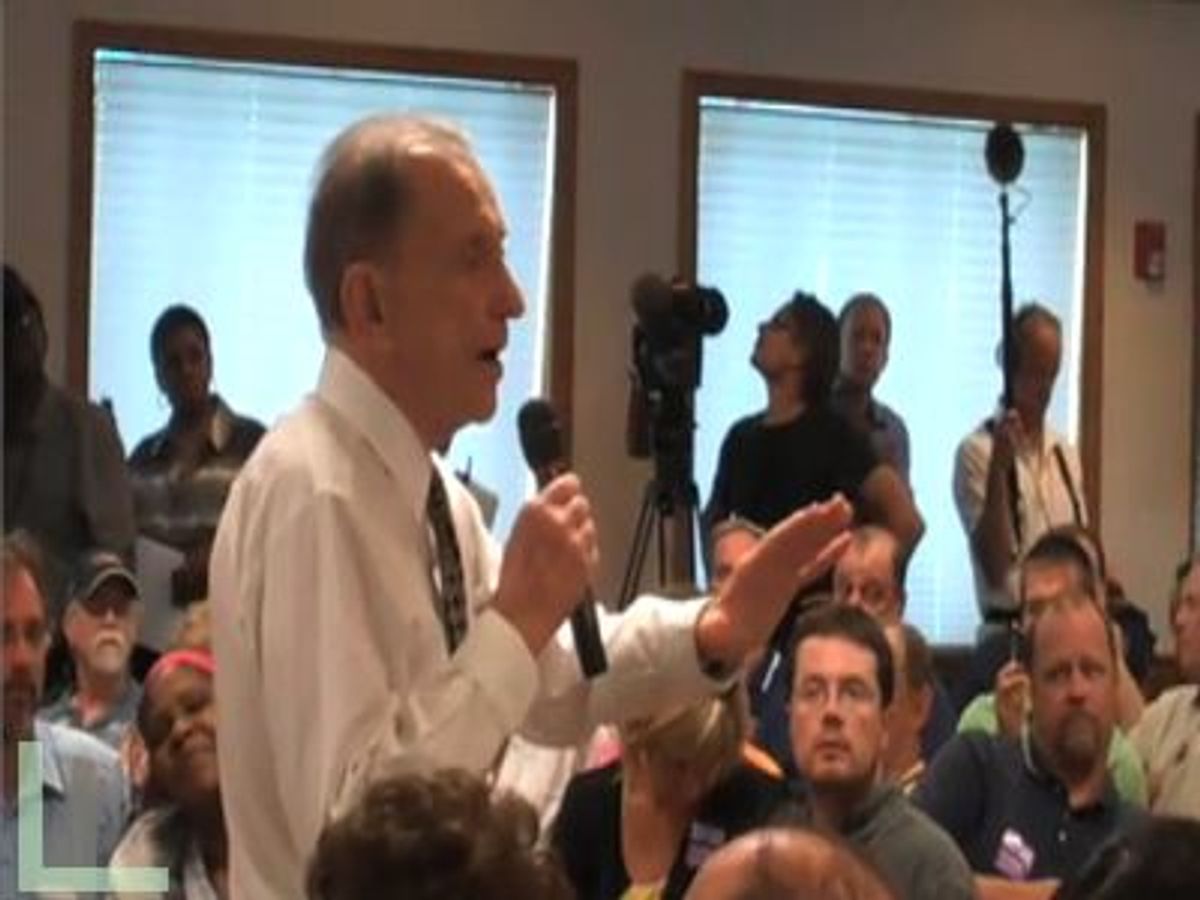 KITTANNING, Pa. -- All of this couldn't have been what Sen. Arlen Specter thought he was signing up for when he switched from the Republican Party to the Democrats earlier this year. Sure, losing his seniority was bad enough. Facing GOP voters who had backed him, noses held, for years, despite his frequent apostasies? He could probably handle that. A primary challenge from the left designed to deny him the nomination for another term that was the main reason he quit the GOP? Bring it on.

But after a week of town meetings all around Pennsylvania, you could hardly blame Specter if he wondered what he'd gotten himself into. Don't think so? You try being yelled at by a woman dressed elaborately as Betsy Ross who keeps asking why you never read the House -- not Senate -- bill on healthcare reform; or being called a "Socialist, Fascist pig" by a furious guy who storms out of the room at a town hall meeting Thursday just before your brand-new Capitol Police bodyguards could toss him, accompanied by a woman who later insists that the Obama administration is a bunch of Nazis. The normal political trials and tribulations are one thing, but getting hassled by a bunch of Tea Party loons, day in and day out, adds such a layer of absurdity to the business of governing that even a longtime survivor like Specter must wish he could escape it all.

Arlen being Arlen, though, he mostly shrugged all the hostility off. "I'll be reporting to my colleagues what temperature it is" back home, Specter told a packed room of about 100 people Thursday afternoon. "In Kittanning, it's about 213 degrees Fahrenheit." He kept calm, defending the healthcare bill no matter who was yelling about it, and answering friendly questions in the same "I've seen it all" tone that the angry ones generated. An hour later, the meeting over, he amended his reading as he wrapped it up. "There's a lot of diametric opposition in this room," he said. "I understand that, I respect it, I'm glad to know your views, and I'll take them back to Washington and tell my colleagues that I was wrong -- it's not 213 Fahrenheit, it's about 235. Thank you!"

Western Pennsylvania isn't exactly friendly turf for Obama or his allies -- which Specter, now that he's switched parties, is trying hard to show he is. Armstrong County, of which Kittanning is the capital, voted for John McCain by a 61-37 margin over President Obama last fall, even as the area's Democratic House member, John Murtha, cruised to reelection. Specter was never popular among the GOP base here, and now that he's flipped sides, they really. don't like him. The town hall meeting overflowed the small room Specter's staff had reserved; hundreds of people milled around in the parking lot outside, waving "Don't Tread on Me" flags and grumbling about socialized medicine. They booed Specter's police-escorted SUV as it departed afterwards.

But the angry turnout showed that both political parties may be misreading the mob scenes that have drawn so much media attention this August recess. Yes, as Republicans say, much of the frenzy against the healthcare reform bill is organic, and not put together by corporate shills for the insurance industry, as Democrats have charged; that much was clear from talking to the people who waited hours in the hot sun to have the chance to yell at Specter.

But the GOP's claim that the furious protests somehow represent the American mainstream turning against Obama's proposals for reform is also wrong: What the town hall meetings are doing is attracting the hardcore Republican base. All of the people I spoke to outside the town hall meeting made a point of saying they'd voted for Sarah Palin last fall, not McCain -- all, that is, except for Betsy Ross (video below). Her real name is Melina Brajovic, a baker who emigrated from Serbia, and she came to the meeting dressed as a patriot -- bonnet and all -- "to remind America that we are a constitutional republic." She voted for Chuck Baldwin on the Constitution Party ticket last year, because "they didn't give a chance to Dr. Ron Paul to be on the ballot at that time." (And yes, she's still upset that former President Clinton bombed Belgrade to stop Slobodan Milosevic's campaign of genocide.)

What the summer is showing is that the hardcore GOP base is mad as hell, and just a few months into Obama's administration, they don't think they should have to take it any more. "We are going to take back our government," one man told Specter during the meeting. "There is such a disconnect from Washington to the people of this country," another man said, lecturing Specter as he asked a question. "You have set yourselves up on a level that you do not identify with your own constituents anymore... You are talking down to the American people if you think we are that stupid!" Opponents of healthcare reform held their fingers in an L shape and waved them in the air, calling out, "Lying!" whenever Specter tried to dispel some of the right-wing blog fodder masquerading as "facts" about the bill.

There were also supporters of the reform plan in the room, though; the Service Employees International Union and other labor groups had made an effort to get seats, and two women with hats and t-shirts from ACORN, the right's most hated boogieman, sat in the front row. "I want to know where all these angry people were when we declared a preemptive war," one woman said, drawing boos from the opponents and cheers from her side. A young medical student from the University of Pittsburgh bashed the insurance companies for putting profits over health. Specter used that to pivot to his support for a public insurance option.

But the opponents turned out in greater force, and it seemed like healthcare was only the tip of the iceberg that concerns them about Obama. "This plan was created by Rahm Emanuel's brother and others, and it's based on what occurred in Germany," said Judith Brown, the Pennsylvania coordinator for the Second Amendment Sisters. She was talking about the bogus "death panel" allegations that the reform bill would lead to euthanasia. I asked how she knew her facts. "Because I was reading some information on the Internet," she said. The conspiracy she'd discovered online went deeper than just Zeke Emanuel. "Everything is being nationalized -- they've nationalized the banks, the auto companies are nationalized, you have nationalized volunteerism, they're going to nationalize the farms," she said. "Eventually everything will be nationalized -- and what do you call that? Nationalized socialist? In German, what is nationalized socialist? In German, what's the word for it?"

So I took the bait, telling her that in German the National Socialist Party was the Nazis. "Exactly," she said. "You think that the people in government are Nazis?" I asked. "Yes," Brown said. "We have a Stalinist government." Having taken a high school history class or two, I pointed out that Stalin wasn't a Nazi. "Well, I know," Brown said. "But he's a Communist." It wasn't clear whether she meant Obama or Stalin; it wasn't clear whether she bothered to distinguish between the two of them, anyway.

That might seem like an unfair example to single out, but it actually seems, sadly, quite representative of the town hall mobs. The angry disruptions don't mean the country is turning against the reform plans -- but as polls are showing, they are starting to win sympathy, especially from like-minded voters watching them from afar. All the shouting isn't helping Obama make the case that he's trying to get past politics as usual, and his GOP opponents, and their base, know it. Will the town meetings tip momentum away from reform? Probably not on their own; the crowds should be too angry, too obviously over the top, to scare most lawmakers. But by the time August is over, Arlen Specter may not be the only one who's glad to see it go.