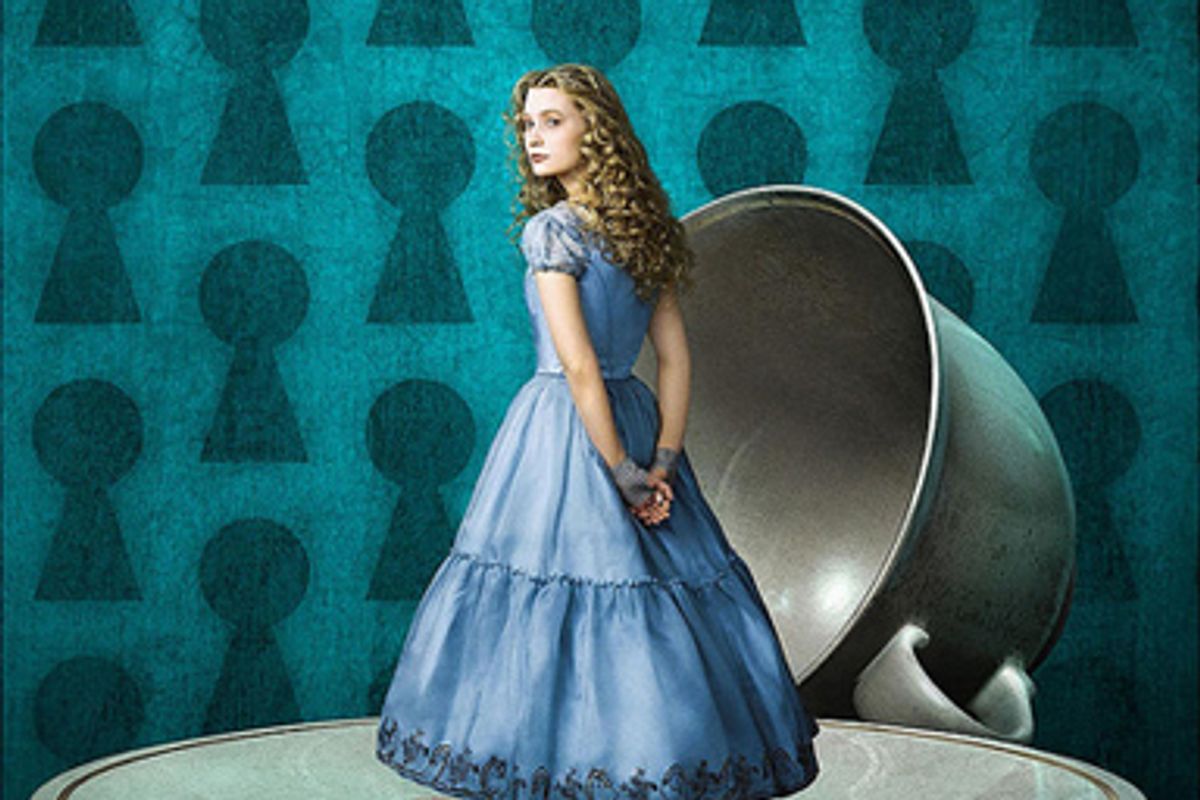 Mia Wasikowska as Alice in "Alice In Wonderland"
-- Mia Wasikowska as Alice in "Alice in Wonderland"

OK then, here's a pop quiz for pop-culture mavens. First, identify each of the following proposed movie projects. Second, identify which one I just pulled out of thin air. Or to put it another way, identify which one was not pulled out of thin air, or some darker, moister region, by someone sitting behind an extremely nice neo-retro desk in Los Angeles. After that we'll get to the subject of whether any of these motion pictures should exist at all.

So how did we do? Too easy, right? I would agree, but I would further contend that my fake idea is no worse than the third- or fourth-worst idea on this list. And yeah, maybe I cheated by including one movie that actually exists, along with another one that's partway along. That's not the point, if I have one; the point is to argue that the movie-supply pipeline of the moment seems jampacked with baffling, half-baked ideas that, y'know, could surprise us and be pretty good, but have a really high potential of turning out to be incredibly awful and/or memorably bizarre, and very likely belong in the category of Someone Should Have Thought About This a Little Bit Harder.

Now, to review. In order, as above:

"The Imaginarium of Doctor Parnassus" Yes, the latest addition to Terry Gilliam's oo-ver is an actual, completed motion picture that will apparently be released this fall. Doesn't quite seem that way, though, does it? Gilliam's effects-driven, unsummarizable, Munchausen-scale fantasy -- which does indeed feature four actors playing one role, and stars the late Heath Ledger alongside Johnny Depp -- premiered this spring at Cannes, to mixed and tepid response. That's neither a positive nor a negative; dark, indigestible films don't do well at film festivals (this is known as the "Synecdoche, New York" problem). This movie has a higher profile than anything Gilliam has made since God knows when -- "12 Monkeys," maybe? -- but given his propensity for muddled aesthetic results and commercial failure, that's not saying a whole lot.

My personal feeling is that Gilliam has been so badly burned by the forges of the film industry's Saurons that he's morphed from Sméagol to Gollum -- he's become a perennially sour old dude who has lost all sense of how to reach audiences. I know he's got fans out there, because I hear from y'all every time I complain about him, so let me state what should be obvious: Gilliam is a rare, acerbic talent with genius-level skills in composition and design, and one of these years he might cough up a good movie. Thing is, I'm tired of waiting -- and unlike almost everybody else in North America, I actually sat through "Tideland," the hackneyed, cruel and thoroughly poisonous Alice-in-Wonderland knockoff that was his last film. Go watch that -- no, I'm serious, go right now; the rest of us will wait -- and then come back and tell me what a big fan you are.

Here's the British trailer for "Imaginarium," which New York magazine's Vulture blog has summed up as "something you'd dream after eating some bad clams and falling asleep in a sauna":

"Alice in Wonderland" Now we come to Tim Burton's effects-driven spectacular in the offing, and I got stuck trying to define exactly what relationship Burton bears to Terry Gilliam. He's the rich man's Gilliam? He's the saner, less evil member of a pair of evil-genius twins? I can't quite figure it out. I know, I know, you're very excited that Burton is finally making a Lewis Carroll adaptation, he seems perfect for it, etc. There's a huge gap here, in that none of the screen versions of "Alice" is fully satisfactory, and I absolutely agree that Burton's trailer looks gorgeous, exactly the kind of vaguely sinister visual candyfloss that made his reputation.

But let's be honest here: Burton has a terrible record with adaptations ("Sleepy Hollow," anyone? "Planet of the Apes"? Didn't think so) and if the story's not about a damaged Goth kid, he doesn't know how to tell it. There's a real risk here that this "Alice" will wind up with Johnny Depp's Mad Hatter as the main character, who happens to meet some chick from another world. And as for making Alice a fully pulchritudinous young adult instead of a little girl, doesn't that risk pushing Dr. Freud even closer to the surface of the film? Again, just personally, I was greatly and pleasantly surprised by Burton's take on "Sweeney Todd," mostly because I wasn't expecting much, but expectations are already off the charts for this one. In case you haven't seen the trailer, or need another look:

Zhang Yimou's "Blood Simple" remake There were some startled blogosphere reactions to the idea that the director of "Raise the Red Lantern" and "Hero" is set to stage a Chinese-language remake of Joel and Ethan Coen's hallowed 1984 debut film. I'm here to tell you that I think it's a tremendous idea. Several of Zhang's best movies have a pronounced noir element, slowed down and adapted to the rhythms of life in rural China. And here comes the moment where I blow my so-called indie cred: I don't like "Blood Simple" that much. It's really well made, but it's one Coen movie that totally earns their rep as sadistic and smirky. I'll probably like Zhang's version better.

Britney Spears-Lindsay Lohan "Persona" remake Sadly, this does not exist. Yet. Awesome idea, though, right? I'm hereby offering to write and produce, hopefully launching myself on a Zalman King-like trajectory as softcore mogul of the 2010s. Screw the moody, black-and-white cinematography of the original, of course -- but you know that scene when Bibi Andersson tells the story about how she and her hot friend get it on with some kid on the beach? What we do with that scene is gonna put the whoot-there-it-is back in avant-garde cinema, my friends. (And that moment where the film breaks and all sorts of crazy shit happens is a good spot for some product placement: BK, Red Bull, Captain Morgan.)

Connor Cruise "Red Dawn" remake This is just depressing and there are all sorts of reasons I don't want to think about it, let alone write about it (or, still worse, actually watch it). Tom Cruise and Nicole Kidman's 14-year-old adopted son, Connor, has joined the cast of a remake of John Milius' Cold War action flick "Red Dawn," to be directed by Dan Bradley, which sounds like a porn-star name but is actually the name of a dude who shot second-unit on the Bourne films. Evidently this reheated Red Scare paranoia exercise will involve the premise that Russian and Chinese troops are invading the American heartland and -- I'm sorry, that's enough.

Mind you, I might want to act all high-minded, but I'm pretty sure I paid to see the Milius film on the big screen myself, so OK. Since we're casting celebrities' kids in remakes of popular '80s films that the world would have gotten along fine without in the first place, there's also a "Karate Kid" remake in the works, with Will Smith's son to play opposite Jackie Chan. Your suggestions please! "Back to the Future"? "Fast Times at Ridgemont High"? "Dirty Dancing"?

David Mamet "Anne Frank" project So by the time I get around to deriding the news that irascible man's-man playwright and screenwriter Mamet has been hired to write and direct a version of "The Diary of Anne Frank," not just one but two parody excerpts have already been scribbled by my competitors. Neither is pitch-perfect -- Mamet's voice is so distinctive that mocking it is quite difficult -- but I think the Village Voice version is closer, and much funnier, than the New York magazine attempt.

Anne: What do they want? The people who ...
Peter: People? What people? The Nazis? Is that what you mean? The fucking Nazis? [Laughs.]
Otto: Peter. The child. She's just a child.
Peter: She's a child? A child? You're a fucking child. No, no, I'm sorry. I take that back. I apologize. I fully and freely apologize. I'm the child here. Let's be honest.
Anne: The people who will come here ...
Otto: When I was a child, there was a river. No, a stream, not a river. A river is ...
Peter: Roaring. A river is roaring.
Anne: What will they do? What do they want?
Otto: Yes, roaring. That's right. A stream gurgles. It gurgles.
Peter: Where was this stream? When you were a child? It was at your house? Your house, or someone else's?
Otto: Yes. No. Perhaps it was my grandmother's house. Perhaps it wasn't near a house. I was a child.
Anne: I think about what they will do. But I can't imagine it. You can't imagine something like that.
Peter: Did you throw stones in it? In the gurgling stream? I love to throw stones. That is one thing that I love.
Otto: I did. I threw them. I think I threw them. Or I am saying it because you said those words. How can I be sure?
Anne: I am asking you a question! What will they do when they come to this house?
Peter: They will fuck us with their big uncircumcised cocks and they will suck the marrow from our bones. Is there anything else that you would like to know?