How tough is our president?

Obama may be incapable of being combative. But can't he say unequivocally what he does and does not want? 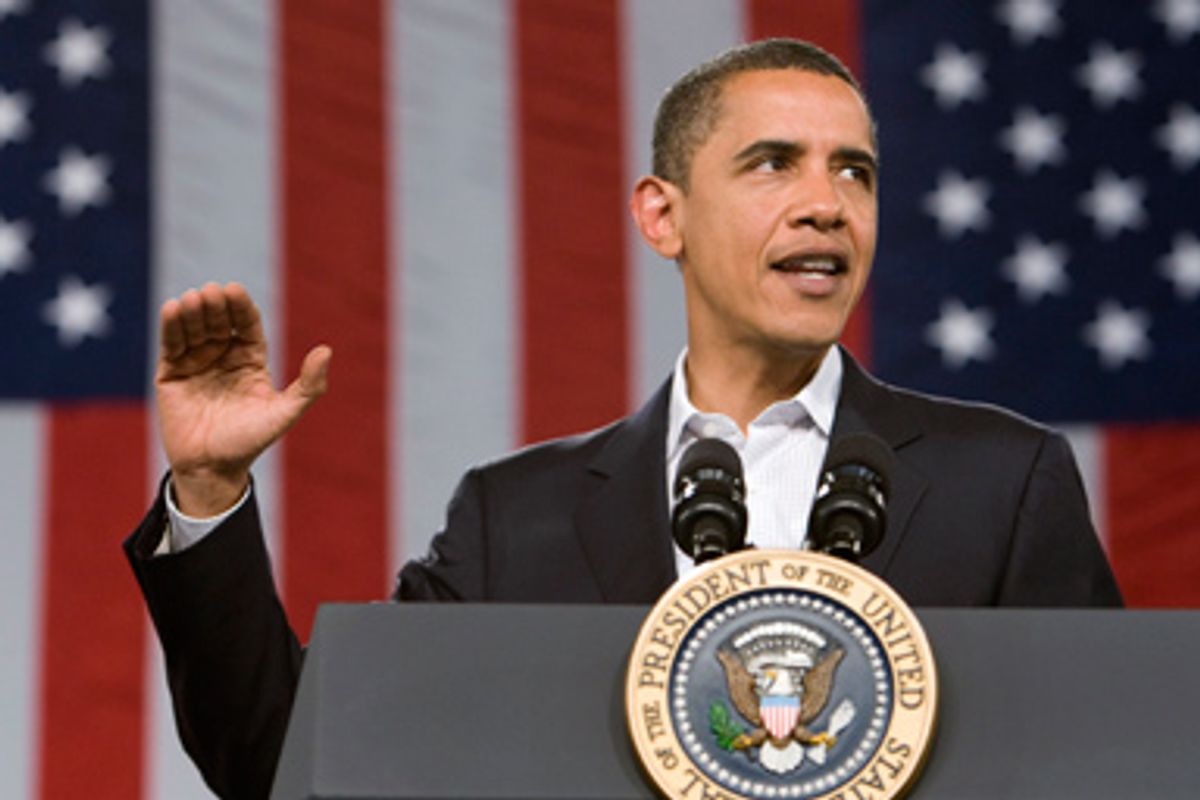 Latest word from the White House is that the President still supports a public option but is also standing by Health and Human Services Secretary Kathleen Sebelius's remark last weekend that a public insurance plan is "not the essential element" of healthcare reform. So where, exactly, is the White House on the public option? Just about where it is on the question of whether it agreed with Big Pharma to bar Medicare from using its bargaining clout to get lower drug prices -- or didn't. In other words, we don't know.

Universal healthcare is President Obama's biggest issue, and he needs strong public support if he's going to overcome the vested money interests in Washington. Which brings us to the question of where the people who voted for Obama stand on all this.

As I just wrote in The American Prospect, my friend Fred voted for Obama and trusts him to do the right thing. "He's the brightest and most decent person who's occupied the Oval Office in my lifetime," Fred says. His trust for the man extends to Obama's agenda. "I don't have time to wade into the details of the economy or healthcare or climate change legislation or anything else, but I know he's got my interests at heart."

My friend Sally also voted for Obama and still likes him, but she's increasingly upset about his policies. "He's giving away the store," she complains, pointing to his penchant for compromise. "He gave Wall Street $600 billion in bailouts and doesn't even want to regulate it, gave big polluters 85 percent of the cap-and-trade permits, and has promised the American Medical Association, Big Pharma, and private insurers whatever they want in return for their support of universal healthcare." Sally says she voted for Obama because he promised to change American politics, but she thinks corporate interests are more powerful than ever.

Sally also doesn't see why Obama is so bent on bipartisanship.

"Republicans haven't helped him a bit so far, won't help him, and he doesn't need their votes, so why compromise with them?"

Fred and Sally offer a fairly good sampling of Obama voters at this juncture, almost nine months after Election Day. Fred represents the trusters; Sally, the cynics. Some cynicism is to be expected in the post-honeymoon phase of any presidency, once the idealism of a campaign has crashed into the realities of governing. What seems unusual this time is how popular the president remains even as many of his supporters become uneasy about what he's actually doing. The apparent paradox may be the byproduct of the very qualities that put him into office.

The President's centeredness, calm, and dignity inspire trust but also suggest a certain lack of combativeness, a reluctance to express indignation, and an unwillingness to identify enemies -- resulting in a tendency toward compromise even at the early stages of controversy.

Pollsters are fascinated that Obama's personal popularity endures -- his "favorables" have fallen a bit, but still hover over 50 percent -- even as support has declined for much of what he broadly endorses, notably universal healthcare.

Republican pollsters, alert to this discrepancy between person and policy, have advised the GOP accordingly: Trying to get the public to distrust Obama is more difficult than arousing distrust for the platoons of government bureaucrats they say his policies are unleashing.

Obama's political advisers are trying to do exactly the reverse -- using the president's personal popularity to sell policies, much as Madison Avenue uses trusted personalities to promote products. Obama's town meetings have been enormously successful; he's fielded questions well, and showed himself to be every bit as thoughtful and engaging as he was during the presidential campaign. But the politics of product endorsement aren't working terribly well nonetheless.

This is partly because Americans have sealed off the man from his agenda. For most Americans, the more they see of Obama (and the rest of his family) the more they like him. But likeability isn't rubbing off on specific policies. The longer universal healthcare hangs out there, for example, the more vulnerable it has become.

It's also because Obama hasn't yet taken full responsibility for detailed policies, such as the public option, or, on environmental legislation, whether cap-and-trade pollution permits should go to polluting industries free of charge. Keeping distance from the specifics has been a wise tactic -- both Bill Clinton and Jimmy Carter got too far into specifics and paid a high price on healthcare when Congress wrested back ownership. And it helps Obama to separate his own approval ratings from public worries about legislation. But it has also made his policies more vulnerable to scare tactics and caused the Sallies in the Democratic base to worry about Obama's willingness to fight. Obama may be temperamentally incapable of being more combative and identifying enemies. But surely he can state less equivocally what he does and does not want -- and, with regard to key matters such as the public option, what he'll sign and what he won't.

The widening gap between admiration for Obama and cynicism about his policies also reinforces passivity in Obama's base, which makes it even harder to advance a specific agenda. His presidential campaign strengthened the nation's political grass roots and spawned hope for a new era of public engagement, but Obama's reluctance to fight for any specifics is causing the base to lose interest. Neither the Freds who trust him nor the Sallies who have become cynical are motivated to do much of anything.

But their activism is crucial. If it comes to a choice between trust and cynicism, America will never achieve lasting change.