Why Senate Democrats are giving up so easily

Jeff Bingaman's state needs healthcare reform, yet he is joining Baucus and Conrad to punt on the public option 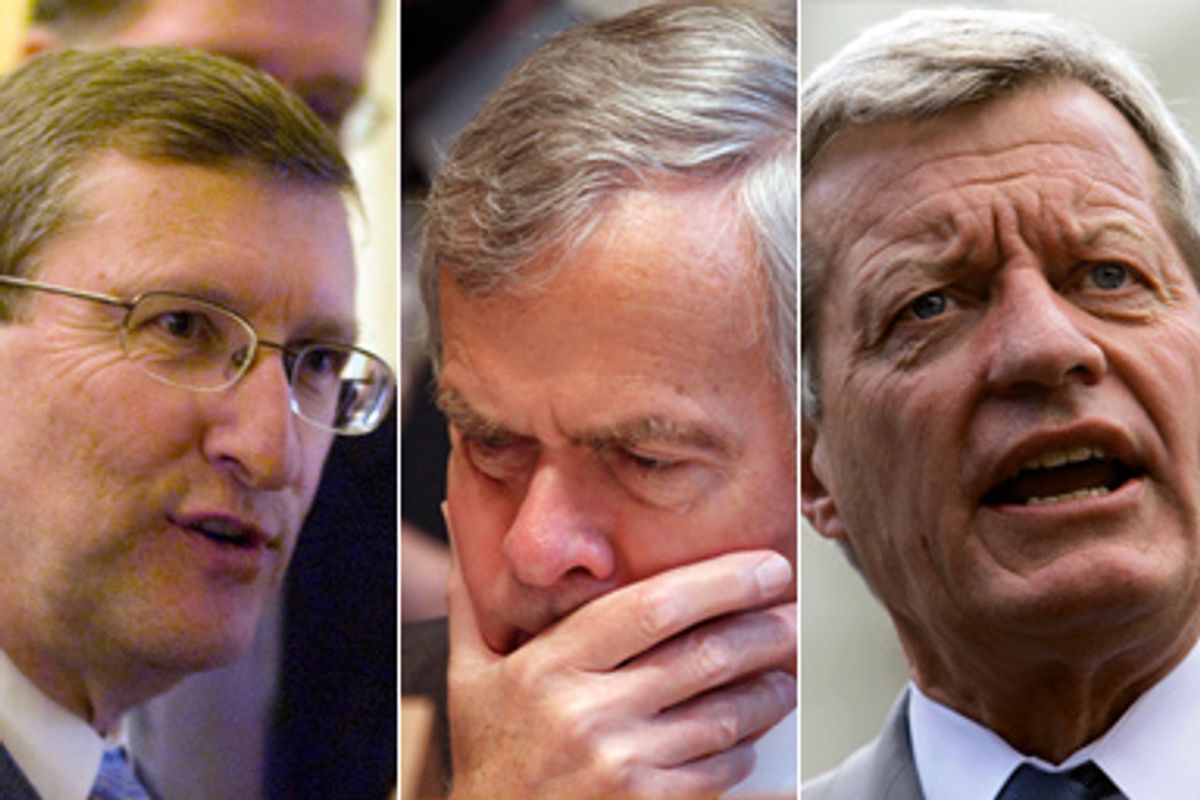 About a month ago, Sen. Jeff Bingaman voted for a sweeping healthcare reform bill in the Senate Health, Education, Labor and Pensions Committee. At the time, the New Mexico Democrat said he was glad the "landmark legislation" was moving along, and particularly pleased that it included a "strong public option" that would let people without insurance buy into a government-run plan.

Not long after that, Bingaman joined up with a bipartisan gang of five other senators on the Finance Committee for ongoing negotiations on a compromise plan. The talks are likely to strip the public option right out of the bill, replacing it with a nebulously defined system of nonprofit co-ops. Most reform advocates think that won't do anything to keep private insurance companies in check. Bingaman doesn't think he was wrong before; he's just trying to be pragmatic. "If we're going to get a bill off the floor, it needs the support of at least 60 members of the Senate," says Jude McCartin, Bingaman's spokeswoman. "He is definitely someone who wants to see as strong a bill as possible signed into law. And I don't think he thinks it's better to do nothing than [to do] the best you can do."

Bingaman may be the prime example of the way some Senate Democrats seem to have approached the healthcare debate this summer: count votes first, figure out what should be in the bill later. And while you're counting, take the most pessimistic view possible. Though three committees in the House and one in the Senate have all passed versions of the legislation with more muscle behind the reforms than what the Finance Committee is working up, that doesn't seem to matter to centrist Democrats, who think those other versions won't get enough support to overcome the threat of a GOP filibuster.

So, in essence, they've decided not to try. North Dakota Sen. Kent Conrad, who has joined Bingaman and Finance Committee Chairman Max Baucus of Montana to negotiate with the GOP, told Fox News Sunday this week that "there are not the votes in the United States Senate for the public option," the support from the health committee notwithstanding. Of course, when you come into the game with the attitude that you can't win, that can quickly become a self-fulfilling prophecy. Lawmakers love to remind voters (and reporters) that legislation is the art of the possible, but the Finance Committee talks seem to have restricted certain possibilities from the outset.

What's mysterious about Bingaman's decision to join the negotiations is how badly New Mexico needs help getting its citizens -- his constituents -- health insurance. The state has the second-highest percentage of uninsured residents in the country, with nearly 23 percent uninsured, according to the Kaiser Family Foundation. It also has the highest percentage who don't get coverage through their jobs. While 53 percent of people in the country have some form of employment-provided health insurance, in New Mexico, only 42 percent do, and that share is declining faster in New Mexico than in all but five other states. The state's median annual household income in recent years has been $42,295, nearly 20 percent lower than the national median of $49,901. If residents of any place could really use the option of signing up for a government plan, it might be New Mexico; the status quo simply isn't working there.

"It's bad here," said Clayton Kennedy, the head organizer for New Mexico's chapter of the Association of Community Organizations for Reform Now, or ACORN, who's taken on the lead role for the labor-backed Health Care for America Now in the state, as well. Reform supporters in New Mexico won't be surprised if Bingaman gives up on the public option, despite his expressed support for it. "We've been alternately pleased and frustrated with him," Kennedy said. "We are growing increasingly concerned that he's not providing the leadership to help this group of six move forward."

It's easier to figure out why the other Democrats involved in the negotiations appear to be willing to fold on the public option: The situation is quite different back home for them. Conrad's North Dakota has a far smaller share of uninsured residents than New Mexico, with only 11.2 percent lacking any coverage. Montana, with 16.4 percent uninsured, isn't much worse off. Both of those states have more people covered by the government insurance that's already very popular: Medicare. The entitlement for seniors covers 13.4 percent of Montanans and 12.5 percent of North Dakotans. And huge shares of both of those two rural states are covered by individual insurance -- 10.3 percent in North Dakota, the most in the country, and 8.1 percent in Montana, the third-most. North Dakota also mandates a fairly high level of coverage for individual policies, making them a good option especially for the state's many self-employed farmers.

That might explain why Baucus and Conrad seem so willing to bargain away the public option; most of their constituents already have insurance, and many of them already have individual policies, of the sort that the reform proposal would replace with a new exchange system that might include the public option. Why mess with a system that mostly seems to be working for them? Supporters of reform are concerned about the sway small rural states -- with elderly populations and different healthcare needs than the rest of the nation -- will have on the Finance negotiations. The Republicans in the talks, Chuck Grassley, Mike Enzi and Olympia Snowe, come from Iowa, Wyoming and Maine, respectively. And the insurance picture in their states looks pretty similar to that in North Dakota and Montana. "I would like to give them credit for hoping that they'll do the right thing," said Jacki Schechner, a spokeswoman for HCAN. "But I think that there's something to be said for being from a state that has a varied demographic."

And that only makes Bingaman, whose state seems to need reform more than the others do, even though it, too, is small and rural, stand out even more. Sure, he voted for the HELP committee bill, and sure, he still says he wants reform to include a public option. But he's starting to telegraph the next move already. "I do think that that legislation can be perfected in a way that we can get bipartisan support for it," Bingaman said in a video message to constituents a couple weeks ago. Some unions and other groups pushing for the bill's passage think Bingaman will punt on the public option in the end; his continued participation in the negotiations could mean they're right. Cautious by nature, Bingaman seems to be reading the political tea leaves and moving toward the conservative end of the scale, rather than standing his ground and forcing opponents to find ways to compromise. Quite a few of his colleagues seem reflexively poised to do the same.

Which underscores the problem President Obama faces as he tries to get a complex piece of legislation through a Congress his own party controls by wide margins. By conceding key arguments before they've even begun, the Democrats risk becoming their own worst enemy on this legislation. After all, if even Bingaman -- the only Democrat who sits on both committees with jurisdiction over the reform bill, whose state might need a change more than any other -- isn't a reliable vote for the public option, who is? Obama's message last year was one of hope and community spirit. So far in the Senate, though, pragmatism still rules the day.