Obama's just not that into you

Liberals and the president struggle to find common ground on healthcare. But are they really meant for each other? 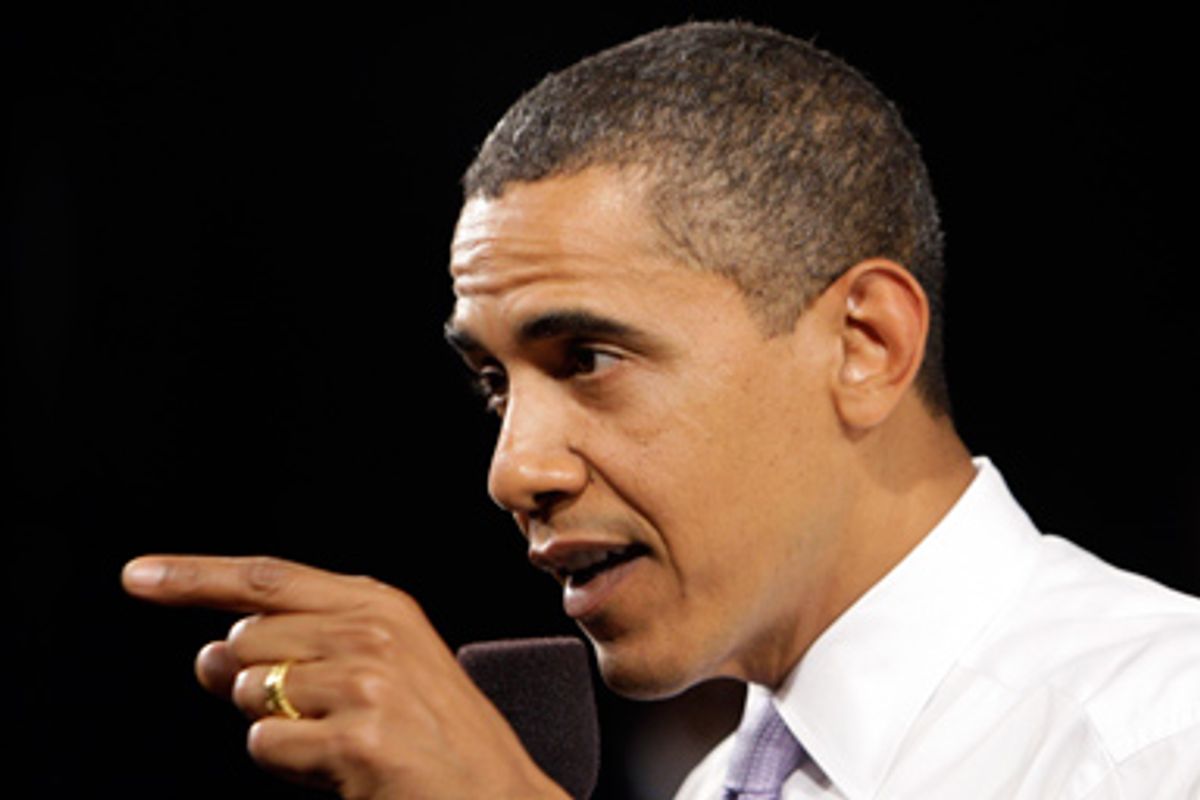 For a moment Thursday afternoon, it seemed as though the White House and its progressive allies were back on exactly the same page when it came to the healthcare reforms the President Obama is trying to get Congress to pass.

"Now, one of the options we want to provide [in the reform] is a public option," Obama told about 200,000 of his most loyal supporters. They were listening and watching on a conference call and video forum sponsored by Organizing for America, the name used by his grassroots campaign structure since it was officially annexed to the Democratic National Committee after last year's election. "There's been a lot of confusion about this, so let me just clarify. I think a public option is important, and let me explain why ... If we have a public option in there that can help keep insurers honest, it can provide a benchmark for what an affordable basic plan should look like."

That sounded like the reassurance that anxious liberals have been waiting for all summer as the legislative process has chewed up the sweeping visions of change to the healthcare system that Obama laid out earlier this year. The White House hasn't been nearly as vocal as some of its allies have been on behalf of the single piece of the reform proposals that many progressives say is most crucial: a government-backed public option as part of a new insurance exchange. A group in the Senate seeking a bipartisan bill may ditch the public option in favor of vaguely defined nonprofit co-ops, an idea that liberals say won't work but that Obama's team won't rule out. By Thursday, it was time to quell a rebellion on the president's left flank and to rally the troops behind the White House before Congress gets back to town in a couple of weeks.

Except that Obama couldn't quite bring himself to join the progressive outcry to keep the public option at any cost. "This is sort of like the belt-and-suspenders concept to keep up your pants," he said. "You know, the insurance reforms are the belt. The public option can be the suspenders." That metaphor can be read two ways, though; in one version, the suspenders are a sign of extra protection, but in another, they're unnecessary. After all, most people don't usually wear both. An hour earlier in the afternoon, Obama may have hinted at which way he meant it, lumping liberals in dismissively with a favorite punching bag of his – the media – as he talked healthcare with conservative talk radio host Michael Smerconish. "The press got a little excited and some folks on the left got a little excited" about reports that the administration didn't consider the public option essential, the president told Smerconish.

About halfway through what feels like the longest August recess in the history of Congress, the public option has emerged as the hottest point of conflict yet between Obama and the progressives who worked hard to elect him last year. The White House has already clashed with the left on issues ranging from Wall Street bailouts to terrorism policies, but the back-and-forth this month has been harsher. Nearly 60 members of the House Progressive Caucus wrote to Democratic leaders this week, saying they wouldn't vote for a reform bill unless the public option was part of it. Union leaders are saying they'll withhold support from Democrats who don't back the public option. House Speaker Nancy Pelosi says reform legislation can't pass the House if the Senate knocks out the public option. Some activists say they want the White House to twist arms to get Democratic support if needed, and to stop trying to court recalcitrant Republicans.

"They're hearing the progressives loud and clear, but in terms of answering them, it's been pretty quiet," Natalie Luna, a spokeswoman for Rep. Raúl Grijalva, an Arizona Democrat and co-chairman of the Progressive Caucus, told Salon.

But that might be because at some basic level, the White House doesn't see the issue the same way liberals do. Aides told the Washington Post this week they didn't understand why the public option had become the focus of the debate. Obama says he'd like the public option to help keep insurance companies honest; if there's another way to do that, though, he'll give it a try, as long as other insurance reforms – new regulations, some cost controls and consumer protections – make it into law as well. To the president, what matters is the whole package, not one specific piece of it.

Contrast that with what some liberals are saying, and it's easy to see why the White House is running into problems. "I want to belong to a Democratic coalition that recognizes the public option is the compromise!!" Marcy Wheeler wrote, as emptywheel, on Firedoglake Thursday. Many progressives wanted to scrap, not reform, the system and replace it with a single-payer healthcare model; giving up on the public option would show just how hopeless that prospect is. Besides, many policy experts doubt anything short of the public option will really keep private insurance companies from raising premium prices too fast for most Americans to keep up with. (Not to mention that a new poll out Thursday underscored the point many liberals make: The public wants the public option.)

The White House position, though, is vintage Obama: Lay out some broad principles, seek consensus, and try to float above the nitty-gritty details of the argument on the way there. Obama has never claimed he was a doctrinaire liberal; in fact, part of his message last year was that he'd get past the tired debates that paralyzed Washington in the name of finding common ground, even if that common ground – as he described it – mostly tended to involve Democratic policy ideas. His approach on healthcare has followed that model; he started the process off by enlisting the very industries the reform legislation will affect, in an attempt to get them into his consensus.

What might be more galling for the left on this debate is that Obama is stuck negotiating with his own party, despite wide majorities in the House and the Senate. Republicans are practically screaming that they won't go along with a compromise, and yet the White House may still have to make some concessions to get moderate Senate Democrats on board. That's not sitting well with liberals. "If this falls apart because of opposition from Democrats, I'm going to be sick to my stomach," a progressive activist told Salon, speaking on condition of anonymity to avoid making the intraparty situation worse.

The tense atmosphere now may only foreshadow what lies ahead when Congress comes back after weeks of hectoring from loud mobs of Tea Party types. No matter how ginned up the angry opposition to Obama's plan has been, and no matter how hard supporters worked to balance it out, the disruptive, self-selecting voices against reform are bound to weigh on lawmakers. "I don't think any member of Congress is coming back from recess more committed, more fired up, more interested in doing the maximum on healthcare," one Democratic pollster said. "I have this fight with members of Congress all the time. I come in and say, '65 percent of people in your district feel this way,' and they say, 'Well, not the people I'm talking to.'"

Republicans, meanwhile, are content to demand bipartisanship and then watch the fireworks set off when Obama tries to give it to them. "For the past two years, the ideological interest caucuses in the House Democratic Caucus have carped a lot but have all kind of buckled at the end of the day – both the progressives and the Blue Dogs," said a House GOP aide. "When Bush was president, it didn't matter very much. There's real ammo now. This is real change, this is real legislation that the president will actually sign, so it puts a much more substantial responsibility on them. We'll see whether they stand up or continue to knuckle under."

Despite all that, Obama isn't ready to give up yet. On Thursday, he tried to rally his supporters with some of the old magic from the campaign. "Just remember we've been through this before," he said, reminiscing about August 2007, when he trailed Hillary Clinton by 30 points in Iowa polls and conventional wisdom had written him off, and August 2008, when Sarah Palin seemed to have turned the election around and conventional wisdom started writing him off again. "There's something about August going into September where everybody in Washington gets all wee-weed up," he said.

"Instead of being preoccupied with the polls and with the pundits and with the cable chatter, what you guys consistently did was, you just kept on working steadily, deliberately, sensibly, knocking on doors, talking to people, talking to your co-workers, just giving people the facts, explaining to them a vision of how we're going to move forward," he continued. "And that's what we're going to have to do today, because we're going to have to cut through a lot of nonsense out there, a lot of absurd claims that have been made about health insurance reform." Last year, that kind of talk was enough to keep a big coalition together through thick and thin. Bringing his allies along with him now may prove harder.