The Report highlights how depraved were the interrogation practices - and how unjust it is to immunize U.S. leaders

Protesters confront John Yoo, a constitutional law professor at the University of California, Berkeley, as he makes his way to a classroom on Monday, Aug. 17, 2009, in Berkeley, Calif. About 75 demonstrators called for the university to fire Yoo, a former Bush administration attorney, who wrote legal memos used to support harsh interrogation techniques that critics say constituted torture.
--

I wrote earlier today about Eric Holder's decision to "review" whether criminal prosecutions are warranted in connection with the torture of Terrorism suspects -- that can be read here -- but I want to write separately about the release today of the 2004 CIA's Inspector General Report (.pdf), both because it's extraordinary in its own right and because it underscores how unjust it would be to prosecute only low-level interrogators rather than the high-level officials who implemented the torture regime.  Initially, it should be emphasized that yet again, it is not the Congress or the establishment media which is uncovering these abuses and forcing disclosure of government misconduct.  Rather, it is the ACLU (with which I consult) that, along with other human rights organizations, has had to fill the void left by those failed institutions, using their own funds to pursue litigation to compel disclosure.  Without their efforts, we would know vastly less than we know now about the crimes our government committed.

Before saying anything about the implications of this Report, I want to post some excerpts of what CIA interrogators did.  Every American should be forced to read and learn this in order to know what was done in their names (click images to enlarge): 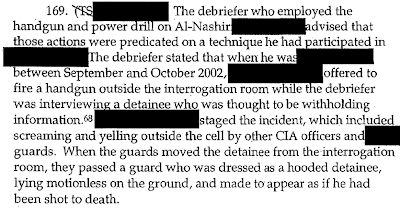 Threats to kill detainee and his children:

Threats to rape detainee's female relatives in front of him:

"Buttstroking" with rifles and knee kicks:

More "convincing and poignant" waterboarding of the type we prosecuted Japanese war criminals for using: 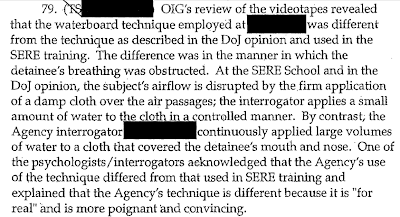 Numerous detainee deaths and other abuses:

The IG Report also documents numerous other abuses that have been documented by prior OLC memos, including having waterboarded detainees 82 and 183 times; hanging them by their arms until interrogators thought their shoulders might be dislocated; stepping on their ankle shackles to cause severe bruising and pain; putting them in a diapers and leaving them doused with water on cold concrete floors in cold temperatures to induce hypothermia, etc.  Some of the numerous deaths of detainees during interrogations were also discussed (for details on detainee deaths, see here and here).  After documenting all of that, the IG Report notes:

For all the talk about how clearly legal the CIA methods were -- or, at worst, that they mistakenly believed in "good faith" that it was legal -- the reality is that even those who participated in the program worried that their actions were criminal, would subject them to prosecution, and would destroy the reputation of the CIA:

Here's how the IG Report described the conduct of the CIA interrogators -- "inhumane":

Perhaps worst of all, the Report notes that many of the detainees who were subjected to this treatment were so treated due to "assessments that were unsupported by credible intelligence" -- meaning there was no real reason to think they had done anything wrong whatsoever.  As has been known for quite some time, many of the people who were tortured by the United States were completely innocent -- guilty of absolutely nothing.

Manifestly, none of this happened by accident.  As the IG Report continuously notes, all of these methods were severe departures from long-standing CIA guidelines (if not practices).  This all occurred because the officials at the highest levels of the U.S. Government pronounced that this was permissible, the protections of the Geneva Conventions were "quaint," obsolete and inapplicable, and the U.S. was justified in doing anything and everything in the name of fighting Terrorists.  As stomach-turning as these individual acts of sadism are, it is far worse to consider that only low-level interrogators will suffer consequences while those who were truly responsible -- the criminally depraved leaders and lawyers who ordered and authorized it -- will be protected.

The historical record of what the U.S. did during this period is clear and growing.  The only question that remains is what, if anything, we will do now that we are seeing the full picture.

UPDATE:  In addition to the release of the IG Report today, Eric Holder announced the limited scope of the torture investigations he would conduct, and the Obama administration announced it would continue the Bush policy of "renditions."  I wrote about Holder's announcement earlier today -- here -- and earlier tonight, I spoke with the ACLU's Amrit Singh regarding all of these consequential civil liberties events today.  That discussion, which is roughly 12 minutes long, can be heard by clicking PLAY on the recorder below:

UPDATE II:  To those blithely dismissing all of this as things that don't seem particularly bothersome, I'd say two things:

(1) The fact that we are not really bothered any more by taking helpless detainees in our custody and (a) threatening to blow their brains out, torture them with drills, rape their mothers, and murder their children; (b) choking them until they pass out; (c) pouring water down their throats to drown them; (d) hanging them by their arms until their shoulders are dislocated; (e) blowing smoke in their face until they vomit; (f) putting them in diapers, dousing them with cold water, and leaving them on a concrete floor to induce hypothermia; and (g) beating them with the butt of a rifle -- all things that we have always condemend as "torture" and which our laws explicitly criminalize as felonies ("torture means. . . the threat of imminent death; or the threat that another person will imminently be subjected to death, severe physical pain or suffering . . .") -- reveals better than all the words in the world could how degraded, barbaric and depraved a society becomes when it lifts the taboo on torturing captives.

(2) As I wrote rather clearly, numerous detainees died in U.S. custody, often as a direct result of our "interrogation methods."  Those who doubt that can read the details here and here.  Those claiming there was no physical harm are simply lying -- death qualifies as "physical harm" -- and those who oppose prosecutions are advocating that the people responsible literally be allowed to get away with murder.

Finally, as for the title of this post:  it was just a way of expressing the view that Americans who want to justify or endorse the torture we engaged in should be required to know what was actually done -- not hide behind the comforting myth that "all we did was pour some water down the noses of 3 bad guys"; I wasn't trying to propose a new law compelling that every citizen read the IG Report.