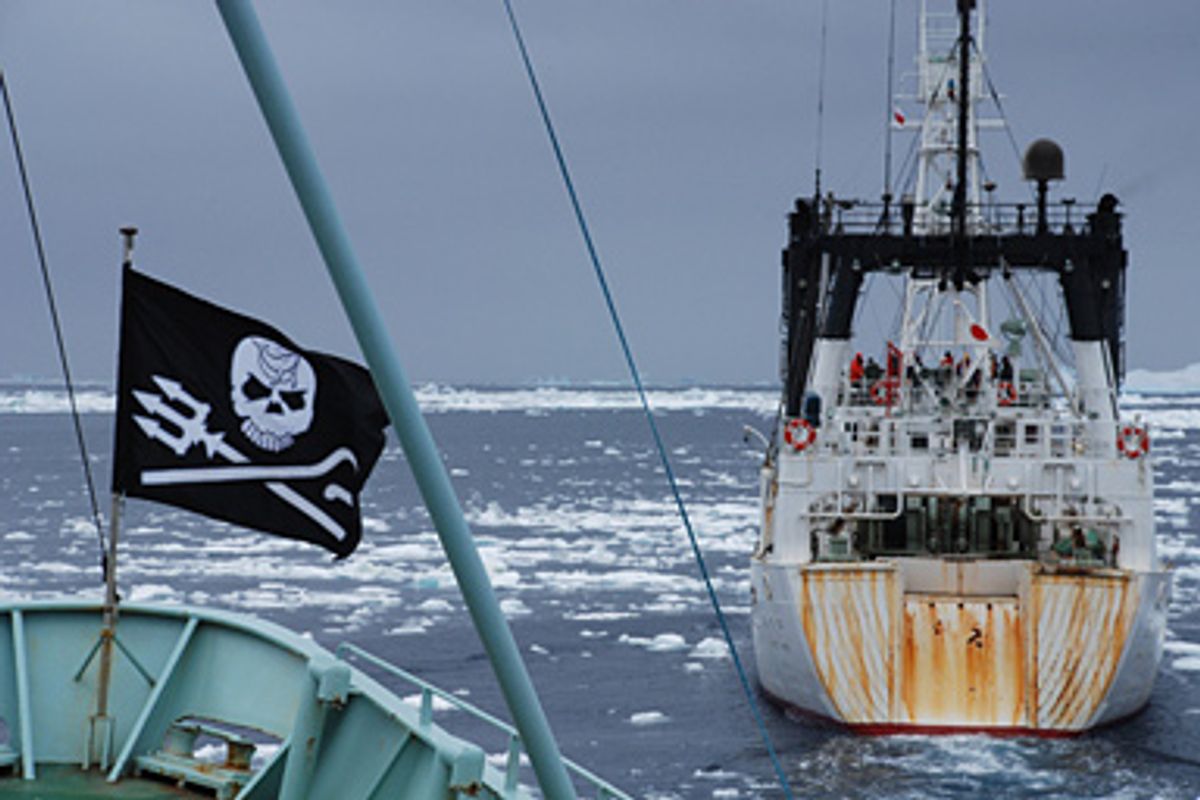 Image from "At the Edge of the World"

A bizarre and breathtaking high-seas adventure set in the remote, spectacular Ross Sea off Antarctica, "At the Edge of the World" is the summer season's most surprising and thought-provoking documentary. Following a ragtag group of activists as they pursue the Japanese whaling fleet through some of the planet's most dangerous waters, Dan Stone's doc makes an intriguing companion piece to Louie Psihoyos' acclaimed (but little-seen) "The Cove," which uncovers Japan's secretive dolphin slaughter. Both movies have elements of real-life action-thriller, and both may raise questions -- at least for some viewers -- about the sanity and ethics of their subjects.

While the 46 activists of the Sea Shepherd Conservation Society shown in the film (who come from 15 different countries) vehemently reject accusations that they are "eco-terrorists" -- they've never done anything to cause human death or injury -- calling them radicals, vandals or pirates is pretty much accurate. In fact, they are literally pirates. Sea Shepherd's two oceangoing vessels, the Farley Mowat and the Robert Hunter, were denied national registry (by Belize and the United Kingdom, respectively) before their 2006 Antarctic campaign began; they sailed illegally from ports in South Africa and Chile, flying a self-designed pirate flag bearing a trident and shepherd's crook as its crossbones.

More mainstream groups like Greenpeace have limited their seagoing ventures to documenting annual Japanese whaling expeditions and reporting them to international authorities (who do nothing about it). Sea Shepherd takes, one might say, a more proactive approach. When the activists find the Nisshin Maru, central processing ship of the Japanese whaling fleet, they bombard it with tear gas and smoke bombs (which may spoil the whale meat), try to foul its propeller with enormous strands of unraveled rope -- and then face the question of whether to use the "can opener," a steel blade attached to the Farley Mowat's hull that could slice another vessel open.

As you might expect, such tactics are highly illegal, and widely rejected within the environmental movement. But neither Sea Shepherd founder and Farley Mowat captain Paul Watson (a Canadian who was among the founding members of Greenpeace) nor Robert Hunter captain Alex Cornelissen nor anybody else in their crew comes off as a ravening zealot. Some of the Sea Shepherd activists are the young, scruffy, anarchist types you might expect, while others are ordinary citizens taking time out from jobs and families for this remarkable adventure. All of them are willing to risk their lives in a guerrilla campaign to stop Japan's outrageous flouting of the international ban on whaling. (The Japanese fleet kills up to 1,000 whales a year in the name of "scientific research," much of which appears to be conducted in Tokyo sushi bars.)

Wherever your sympathies lie, "At the Edge of the World" is a terrifically exciting yarn, full of appealing and sometimes exasperating characters and breathtaking, daredevil cinematography. It's about a hair-raising naval pursuit in which both sides are breaking the law but still, paradoxically enough, observe the basic codes of maritime coexistence. In the middle of the chase, two crew members from the Farley Mowat take to sea in a small, fast inflatable boat -- and then disappear. When Cornelissen, the Robert Hunter's laconic Dutch captain, issues a Mayday distress call, the Nisshin Maru observes protocol, powering down its engines and offering to help in the search. Later in the film, the situation is reversed: A different Japanese ship issues a distress call -- possibly because the Sea Shepherd activists have damaged its engines -- and the Farley immediately stops and offers aid. (Unsurprisingly, the offer is declined.)

We see the story entirely from the Sea Shepherd ships' point of view, and in that respect there can be no question whose side director Stone is on. Still, the film isn't exactly agitprop; if you're inclined to believe that Sea Shepherd's tactics are reckless and irresponsible, nothing here is likely to change your mind. What I see here is 46 people from many different walks of life all over the world who have rejected a life of passive, snarky Internet citizenship in favor of something much more vigorous, and dangerous. They've put their lives and freedom at risk in rust-bucket pirate ships in the vastness of the Southern Ocean. They've survived fear and icebergs and violent seasickness and saved the lives of hundreds of whales. They've seen Antarctica and had a life-transforming experience. If "At the Edge of the World" is an eco-fringe recruitment video, I can't imagine a better one. (The film's YouTube trailer follows below.)

"At the Edge of the World" is now playing at Cinema Village in New York, with more theaters and DVD release to follow.

Beyond The Multiplex Documentaries Environment Movies