Who's to blame for the mortgage crisis? 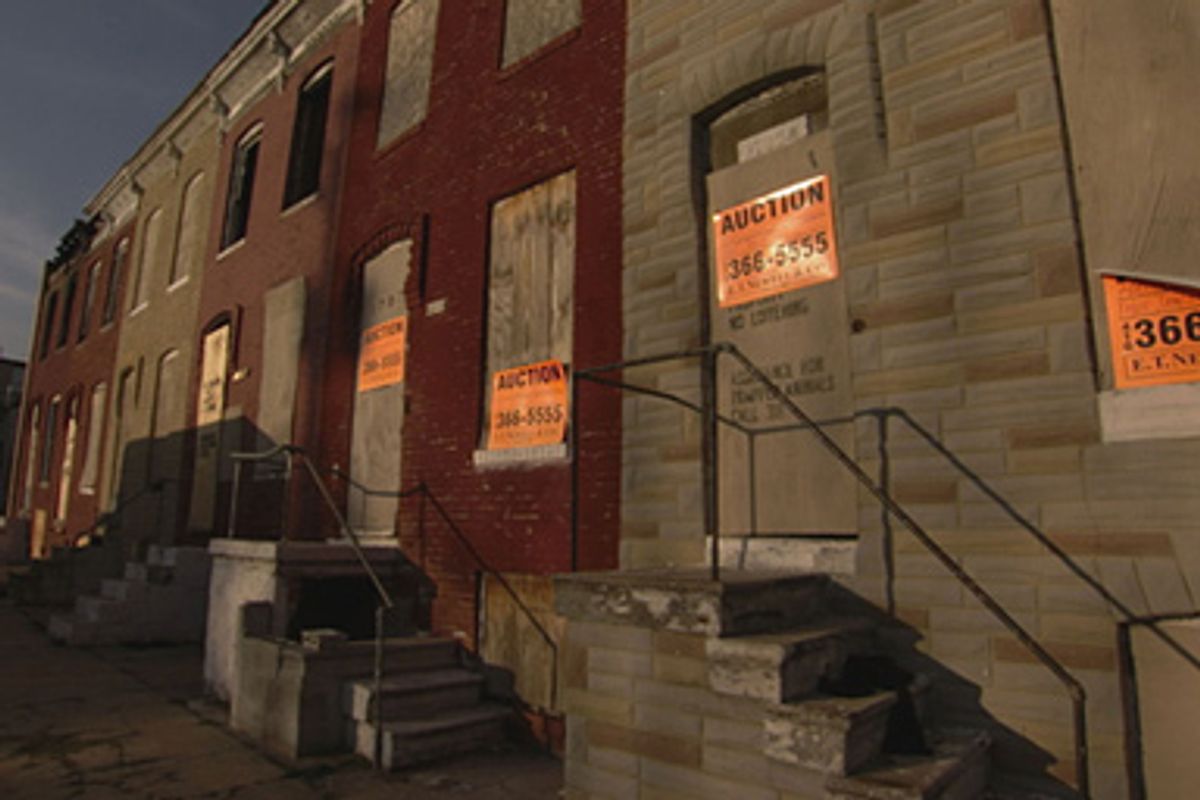 An image from "American Casino."

If you're having a hard time getting your head around exactly what happened in the historic meltdown of America's home-mortgage market, you're not alone. As the wife-and-husband investigative team Leslie and Andrew Cockburn suggest in their new documentary, "American Casino," nobody fully understands it: Not the bankers and brokers who sold subprime mortgages (often using deceptive tactics or disingenuous language), not the Wall Street wizards who carved them up into ever more esoteric financial instruments, not the free-market wise men like former Fed chair Alan Greenspan or former Sen. Phil Gramm, and certainly not the ordinary citizens who believed they were fulfilling the American dream and wound up losing their homes, their financial security and their self-respect.

Actually, the Cockburns meet one guy in "American Casino" who understands the whole mess better than most, a California real estate investor named Jeff Greene who smelled the end of the housing bubble around 2006 and bet $1 billion against the mid-decade exuberance of Wall Street. Sitting in his walled and gated beach compound in Malibu, Greene calmly tells the camera that the opportunity for his successful hedge bet (which has yielded $500 million so far) involved massive pain for millions of homeowners.

We meet some of those people too; the Cockburns focus in particular on the African-American community of Baltimore, a city devastated by the tidal wave of foreclosures. Of course foreclosed properties can be found in virtually every neighborhood of every town and city, and at every income level. But Latinos and African-Americans are several times more likely to be affected than whites, and while the problem is undeniably complicated, that almost certainly reflects the enduring legacy of racism. In the 1990s and 2000s, neighborhoods that had previously been "redlined" by traditional lenders became targeted by unregulated and unscrupulous vendors of subprime mortgages, who neither knew nor cared whether borrowers were likely to default on those loans. As we now know, the results were toxic.

One of the film's sad ironies is that middle-class homeowners like Denzel Mitchell, a Baltimore high-school teacher, or Patricia McNair, a family therapist, might well have qualified for conventional loans from normal banks. (One survey mentioned in the film suggests that at least half the people who applied for subprime mortgages in 2006 could have qualified for prime mortgages.) Instead, they were enticed into too-good-to-be-true first and then second mortgages that adjusted sharply upward, which they couldn't realistically afford. Both people are aware that their own lack of financial sophistication is partly to blame for their predicament, but that does nothing to lessen the heartbreak as McNair and her husband have to leave the appealing family home where her adult children grew up, or as Mitchell must abandon his organic vegetable garden and the Tuskegee Airmen-themed bedroom for his little boys.

But if you want to blame somebody for what happened to Mitchell, McNair and millions of other Americans, the place to point the finger is at the fervid deregulation advocated by Greenspan and enacted by Congress under the whip of Gramm and other free-market ideologues. Such laissez-faire reforms created a wide-open marketplace where bankers and brokers could sell whatever extortionate mortgage deals they wanted to whomever they wanted, while lying to consumers about what they were getting and lying to lenders about the borrower's income and assets. Meanwhile, as one anonymous former Bear, Stearns banker tells the Cockburns, Wall Street securities dealers carved up packages of mortgages into abstruse, "fourth-dimensional" instruments to be sold to "idiots."

"American Casino" is of necessity a fragmentary tale; it was being filmed in 2008 as the crisis broadened and deepened, with events unfolding too fast for the Cockburn cameras. But while the mortgage crisis still awaits a rigorous deconstruction along the lines of Alex Gibney's "Enron: The Smartest Guys in the Room," this film stands as an intimate, terrifying document that renders an incomprehensible slice of recent history in human terms. While the stories of Denzel Mitchell and Patricia McNair made me want to weep, the film's most memorable images stem from the Sisyphean task of Jared Dever, a bright and handsome local official in Riverside County, Calif., whose job is to control the county's mosquito epidemic, largely caused by the fetid, abandoned swimming pools behind foreclosed suburban homes.

Dever patrols a nightmarish, new-but-decrepit landscape straight out of the fiction of J.G. Ballard, carefully checking empty houses for signs of meth labs or marijuana grow zones before attacking the pools, whose algae-green water is full of abandoned patio furniture, tires and sports equipment, along with millions of mosquito larvae and the minnows who live on them. I'm not sure that hosing down the whole subdivision with Malathion is any kind of answer. Civilization didn't leave much of an imprint on that place. Now that the bankers have sucked out all its supposed economic value, we might as well drain the pools, knock down the houses and let the coyotes and rattlesnakes take over.

"American Casino" is now playing at Film Forum in New York. It opens Sept. 11 in Denver and Pittsburgh and Sept. 18 in Los Angeles, with more cities to follow.