Chris Brown still doesn't get it

On Larry King, the singer proved "the cycle of violence" is hard to beat. Can his career (or his future) be saved? 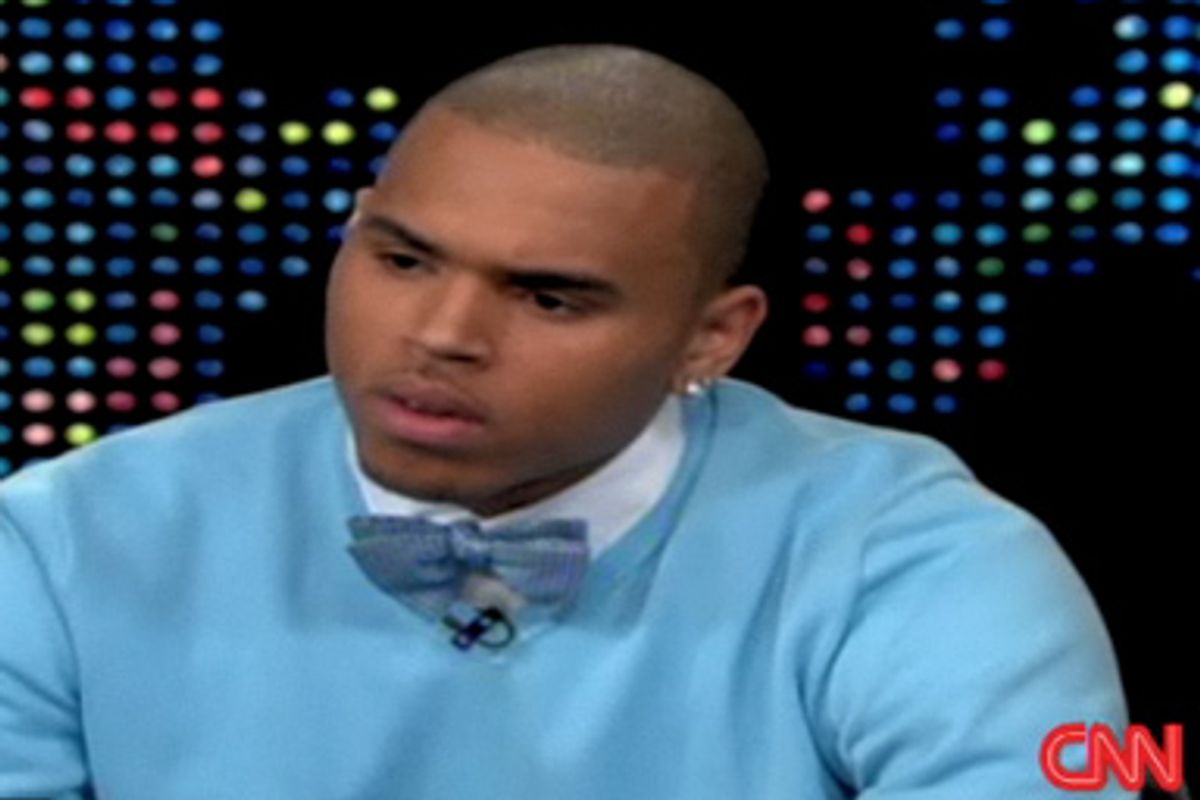 Chris Brown does not do penance well. On “Larry King Live” last night, the superstar singer, better known lately as the guy who beat up Rihanna, appeared eminently uncomfortable in his new self-appointed job of “role model.” Clad in that baby blue V-neck sweater and matching bow tie and flanked by his mother and his attorney, celebrity ambulance chaser Mark Geragos, he looked more like a Care Bear than a convicted domestic abuser.

Throughout the entire hour -- a 30-second teaser of which leaked on Monday -- Brown remained soft-spoken and polite, mumbling terse replies and staunchly refusing all inquiries into the specifics of what happened that night last February with Rihanna. That gambit -- like his cuddly ensemble -- was a clever way of assuring that America never got a glimpse of the young man who used his girlfriend’s face as a punching bag. What, after all, would be the payoff for him in saying what led up to the violence? What could he possibly say that wouldn’t sound like a “she was asking for it” rationalization?

When King asked Brown point-blank if he recalled the incidents, he flatly said, “No.” No, he does not remember shoving his girlfriend into a wall. No, he does not remember smashing a car window. But if he doesn’t know what he did, he is at least clear on how he feels. When King asked Brown, “Do you love her?” he replied, “Definitely.” King pressed on, “In love with her?” “Definitely,” he echoed. And even when King asked, “Would you spend a lifetime with her?” he hemmed and hawed a moment before stating quietly, “Yes.”

King then showed the now-infamous photo of Rihanna, her lips swollen and bloody, her face battered, putting Brown at a near loss for words. “When I look at it now, it's just like, wow, like, I can't -- I can't believe that -- that actually happened. It's -- it just really like took a toll on me. Like, I was just like wow.”

Having never beaten anybody myself, I don’t know what the appropriate response is or how much I’d block out. But I do know this -- despite his repeated insistence on taking responsibility for “the incident” and stating that “I really regret and I feel totally ashamed of what I did” -- not once during the hour did the guy just come out and say it’s not cool to hit. He danced around the topic, he called it something he wishes he could take back, and he said he wants to be a role model. But the man who said, “Sometimes, in a way, you lose your temper or arguments get heated,” and that in the future he wants to handle problems “differently and better,” never came out and simply said the words that real men don’t hit women.

So it came to pass that the most illuminating moment of the hour came not from Brown but from his lawyer. After Brown’s mother tearfully acknowledged that Brown had been exposed to domestic abuse in his childhood because of her violent ex-boyfriend, Geragos said, “They talk about the cycle of violence. I've handled these cases or these types of cases for years. And you tend to see -- it's almost surprising. In some cases, I've represented three generations of people who have been charged with this crime.” A nice racket for defense attorneys, but crushingly depressing for everybody else.

There was also repeated speculation throughout the show about Brown’s career. King noted that the singer has lost endorsement deals, and Brown acknowledged he’s had to step back from his touring. But though the stigma of abuse will likely always follow him, there’s no such thing as career suicide anymore. Brown’s idol, Michael Jackson, had survived scandals and still managed to sell out 50 dates in London earlier this year on what was to be his comeback tour. And in the midst of his own drama, Brown’s exuberant 2008 hit “Forever” got a second life this summer thanks to a viral wedding dance video that pushed the song right back onto the charts.

Brown is only 20 years old. He has a full lifetime ahead of him, one that will include other relationships and very likely children of his own. That’s why as untenable as his behavior has been, I need to hope that Chris Brown, domestic abuser, will not always be Chris Brown, domestic abuser, who sat quietly as Larry King rattled off, “You punched her a number of times. You threatened to beat the blank out of her when you got home. You warned you were going to kill her. You bit her on the ear.” That guy seems to still be suffering from a big fat case of not getting it. But late in the hour, in a moment that seemed a little less guarded, he admitted, “I don't know everything. I'm not a man fully yet. So I want to definitely be a man and learn who I am and learn how to control emotions."

I want to believe that the next few months will make that possible. Because I have to believe, for the sake of every person who’s ever been abused and every person who’s been an abuser, that it’s possible to break that “cycle of violence.” Brown’s punishment from the court is five years' probation. But he faces a potential sentence that stretches beyond his own lifetime and far into that of his future progeny. He’s got forever. Let’s see what he does with it.