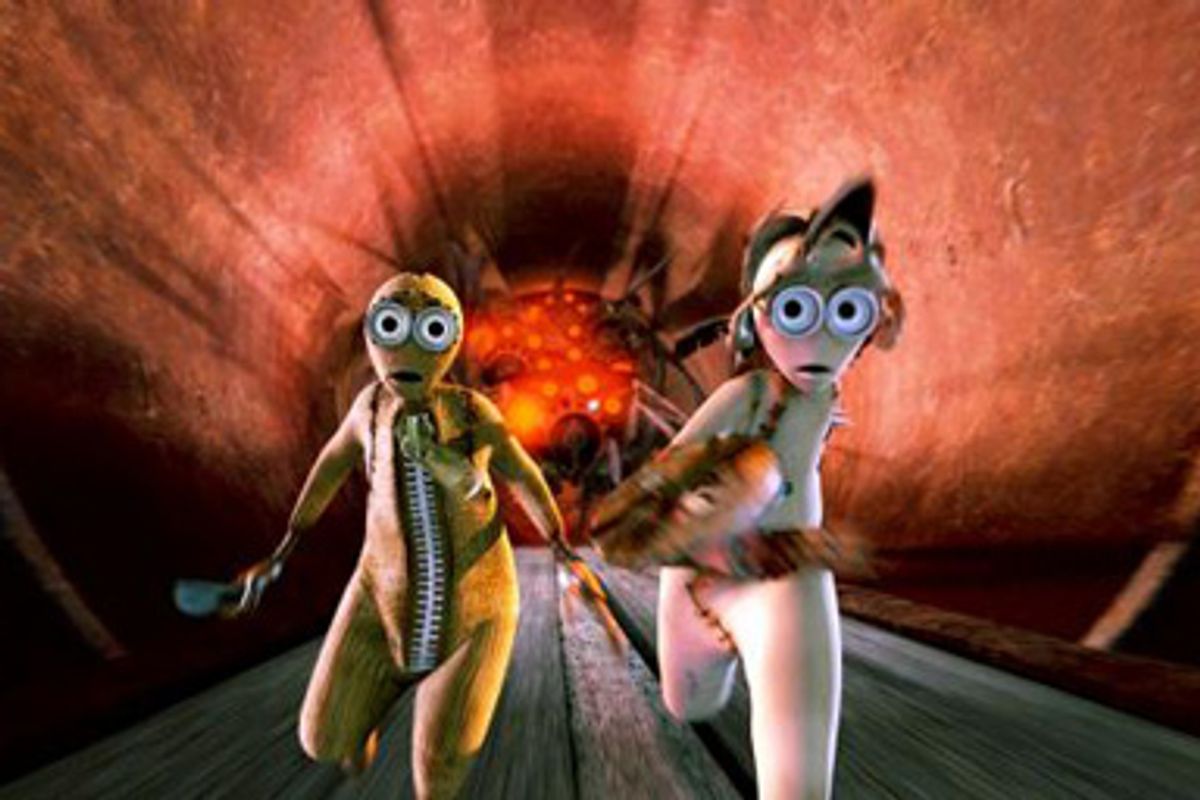 9 (at left, voiced by Elijah Wood) and 7 (voiced by Jennifer Connelly) flee for their lives from the Fabrication Machine.

Elijah Wood needs to set some limits. I just don't think he should be playing plucky little heroes in quest narratives, especially ones with lovable, puppy-loyal sidekicks who must set out across hostile terrain into the lair of a forbidding enemy. Actually, the problem with wunderkind director Shane Acker's "stitchpunk" animated fantasy "9" isn't so much that it bears a sped-up, dumbed-down resemblance to "The Lord of the Rings," although it does. It's more that Acker's dark and whimsical creation, so clearly in the tradition of his mentor Tim Burton, is wondrous to behold but offers only an indifferent and generic mishmash of quest fantasy and post-apocalyptic science fiction when it comes to story.

Wood supplies the voice for 9, the last in a series of zippered, goggle-eyed burlap sock-puppets who've had the spark of life zapped into them by a scientist who may have been the last living human on the planet. 9 wakes up with his creator dead on the floor in front of him, and opens the window to find a devastated city that has apparently been destroyed at the height of an industrial civilization that was simultaneously high-tech and not quite modern, exactly the combination for which the already-overused neologism "steampunk" was invented. Acker builds a tremendous atmosphere of menace and mystery in these early scenes, as the voiceless 9 wanders through a ruined, dead landscape patrolled by a fearsome, feline robot known only as the Beast.

Indeed, when the storytelling of "9" is purely visual, without much explanation or exposition, it's haunting and highly effective. One of the monsters 9 and his homespun compadres must face, a sinister, cobra-like creepy-crawly that simultaneously suggests the evil snakes of Kipling's "Rikki-Tikki-Tavi" and the undead Nazgûl of "Lord of the Rings," might be the scariest creature I've seen in a movie all year. And when one of the nine living puppets is killed and must be given a solemn funeral, at a moment when the group's mission to preserve their last fragmentary piece of planetary life amid a hateful wilderness seems doomed to pathetic failure, I felt a genuine upsurge of emotion.

But a 90-minute mass-market motion picture demands a conventional narrative, and the more of it Acker and screenwriter Pamela Pettler supply, the more conventional it becomes. Our tiny group of burlap survivors is divided into factions, one loyal to the stern and conservative 1 (Christopher Plummer), who sports a bishop's miter and crook and urges caution, and the other to the renegade warrior 7 (Jennifer Connelly), who sports a skull mask and stages guerrilla attacks against the robot overlords. You get exactly one guess which of these characters -- oh, forget it, no you don't.

Furthermore, a bunch of the film's relatively brief running time is devoted to unpacking a back story we can pretty much figure out from context: These little homunculi find themselves at the tail end of a genocidal war between humans and machines, launched when the superpowerful robot warriors turned against their creators. Naturally enough, there's a magic whatsit encoded with mystical symbols (not a ring exactly, though it kind of looks like one), which 9 and his Sancho Panza-like one-eyed co-puppet, 5 (John C. Reilly), must carry into the deep, dark, brooding lair of the Beast and then -- no! For God's sake don't stick it there! Too late.

Produced under the aegis of both Burton and Russian director Timur Bekmambetov ("Wanted" and the "Day Watch"/"Night Watch" series), "9" presents a wildly uneven mixture of ingredients. On one hand, it's an earnest, loving attempt to expand Acker's 2004 Oscar-nominated short into a full-length movie; the animation looks fantastic and the range of voice talents (also including Martin Landau and Crispin Glover) is impressive. On the other hand, the story is a half-assed jumble of the hackneyed and half-familiar, and once you get past how cool the movie looks, so is Acker's created universe.

In the end-of-summer battle between two numerologically obsessed fantasy-director protégés, Neill Blomkamp's "District 9" is the clear winner. Blomkamp's giant-prawns-from-space apartheid allegory combined a bunch of sci-fi movie archetypes with a real-life setting to create a world nobody had ever seen on screen before, while Acker has created a fitful combination of beautiful, dreamlike images that never knit together forcefully enough to seem individual or convincing. I'll remember that undead snake-critter years from now. What movie was it in? I'm already starting to forget.

Beyond The Multiplex Movies Tim Burton