Is something better than nothing on healthcare?

The White House is arguing there's a choice between change and the status quo. But that may not make the left happy 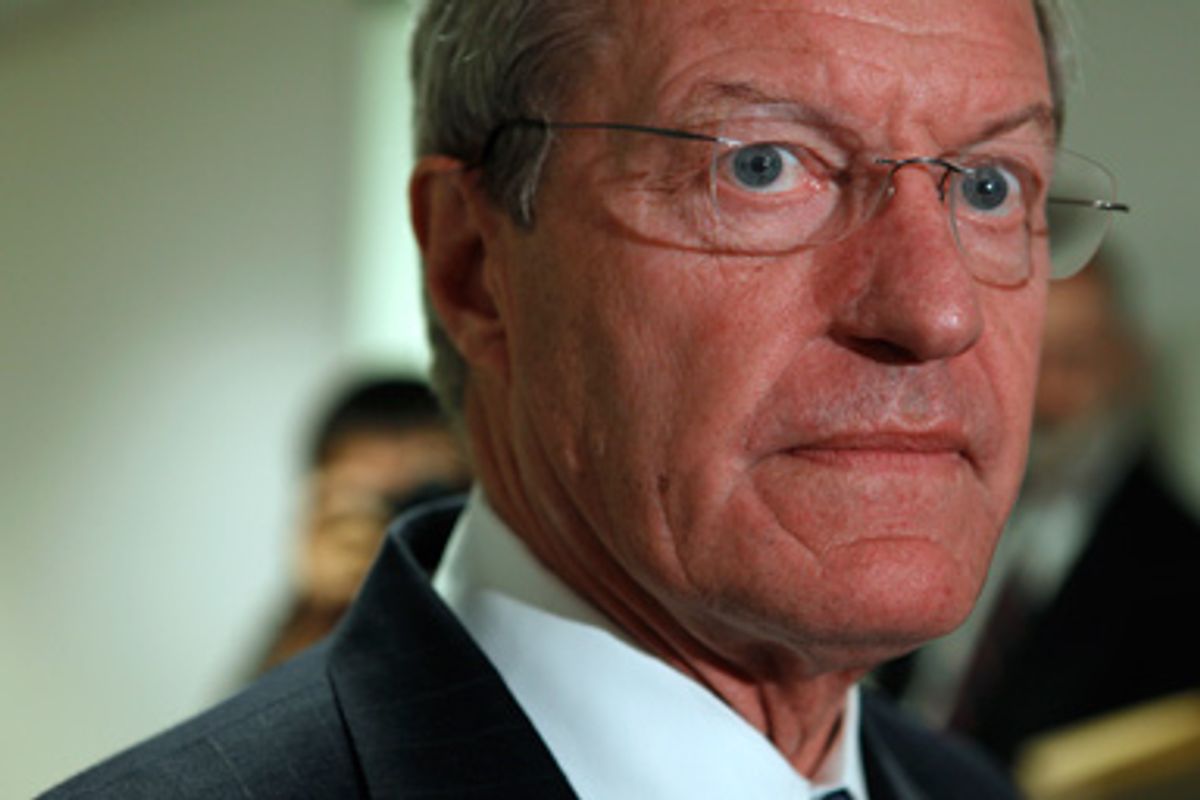 Sen. Max Baucus, D-Mont., talks with reporters after a meeting on health care reform on Tuesday, Sept. 8, 2009 in Washington.
--

After months and months of backroom meetings, public forums, campaign-style speeches and a few wild-eyed town halls, the choice the White House wants to lay out for the American public and Congress alike Wednesday night is actually pretty simple: Do you want to do something, or do you want to do nothing?

Exactly what the "something" is, of course, hasn't been determined yet. Though a bipartisan group in the Senate kept trying to find a path forward, lawmakers returned from a long, and politically stormy, August recess without a much clearer idea of how to achieve sweeping reforms than they had when they left. So President Obama, in a rare address to both the House and Senate, will try to make the case that unless you just happen to love the current healthcare system -- complete with its heartless private insurers and its ever-increasing costs that don't actually bring better health -- it's time to take the best deal possible on reforming it. The message coming out of the White House and the Democratic leadership in Washington leading into the speech is basically that you may not love everything about the reform legislation, but it's better than not passing anything.

"This is a problem that has been on the radar screens of the American people for a long, long time, and that they demand something be done about it," White House press secretary Robert Gibbs told reporters Tuesday. "And I can assure you the president aims to be the person that does something about it ... I think the president will outline what he thinks can get done this year." Early Tuesday evening Eastern time, the White House released a radio clip of Health and Human Services Secretary Kathleen Sebelius saying the same thing: "Doing nothing is not an option."

All that rhetoric of something vs. nothing comes because Obama's speech will actually have three different audiences. There are the millions and millions of voters, taxpayers and -- maybe most important -- patients, watching at home and trying to figure out what they make of the whole thing; conservative Democrats who are terrified they'll lose their jobs in Congress if they go along with a plan that attracts no Republican support; and his liberal supporters, who are furious the White House appears ready to compromise on a government-run public insurance option in order to get something passed. (Republicans would make up yet another audience, but most of the GOP has already signaled that it won't sign on to any reform proposal.)

If any of those groups is likely to walk away from the speech disappointed, it may be the progressives. White House aides say Obama would still like the legislation to include a public option, to help assure low prices and decent coverage by giving customers an alternative to private insurance. But a proposal that a bipartisan group of Senate Finance Committee members is discussing would drop it in favor of nonprofit co-ops, and top Obama aides said over the weekend that the public option isn't something the legislation must have. The White House is also negotiating separately with Sen. Olympia Snowe, a Maine Republican who's part of the bipartisan talks, about phasing in -- or "triggering" -- a public option only if the other broad insurance reforms in the legislation don't work as planned, Snowe told Salon Tuesday.

But to progressives, many of whom already see the public option as a step down from a government-run single-payer system, there isn't any more room to give. "A trigger would be a surrender," Rep. Raúl Grijalva, an Arizona Democrat who co-chairs the House Progressive Caucus, said in an e-mailed statement. House Speaker Nancy Pelosi said after meeting with Obama that the "overwhelming majority" of House Democrats support the public option, which could complicate efforts to forge a compromise to satisfy conservative Senate Democrats (much less Republicans). Several hundred former Obama campaign staffers have signed a petition -- on the Web site "YesWeStillCan.org" -- calling on the White House to stand firm on the public option; the group is trying to buy a full-page ad in the New York Times to exert even more pressure. "If he gives up now, he's going to give up on the rest of this," said Mike Elk, who worked in western Pennsylvania during last year's campaign and now works at the liberal Campaign for America's Future. Elk and a few dozen other former staffers held a rally Tuesday outside the White House, but Obama was off in Virginia not turning schoolkids into socialists at the time.

Regardless, the effort to come up with whatever "something" the Senate can pass crept along Tuesday. Sen. Max Baucus, the Montana Democrat who chairs the Finance panel and is leading the bipartisan "Gang of Six" talks, asked for a response to his proposal by Wednesday morning. The group won't have finished its work by the time Obama speaks at 8 p.m. Eastern, though. Though Baucus said he was still trying for a deal, he sounded like his patience with the GOP was finally starting to run out. "This really comes down to a matter of political will," he said, emerging from three hours of talks Tuesday evening. 'The rubber's starting to hit the road here; we're going to have to start fishing and cut bait pretty soon." (But Baucus also said he didn't think dropping the public option endangers it "at all, frankly," so he may not be taking as hard a line as the left would like.) The fact that the talks were still going on seemed to be helping Democrats stick together. Another conservative Democrat in the group, Kent Conrad of North Dakota, said after the meeting that "failure is not an option," and that he'd like Obama to stress the same message in Wednesday's speech. Nebraska Sen. Ben Nelson, a vocal opponent of the public option, said he liked what he'd seen of the Baucus proposal, and that it might help bring Republicans on board -- which is something Nelson is particularly concerned about. Snowe said it was plain that reform needed to happen.

Some of the urgency to take whatever can pass comes from the lessons of 1994, the last time a Democratic president with a big majority in both houses of Congress tried to pass healthcare reform. When Bill Clinton tried, he wound up walking away with nothing, and the fall brought Newt Gingrich and a long nightmare to power. "This is something that the president needs, and so do the Democrats in Congress, because it's our government now, and we need to demonstrate to the American people that we can do something with it," said Steve McMahon, a Democratic strategist who worked for Howard Dean in 2004, when universal healthcare was also a campaign mainstay.

But some of it also comes from the fact that with or without the public option, there are other reforms at stake that most Americans, as well as most progressives, think are badly needed: banning insurers from refusing coverage due to preexisting conditions, allowing people to shop for different policies, subsidizing coverage for at least some share of those who can't afford it otherwise. Expect that -- the stuff it's easy to get behind, the stuff that isn't causing Democrats to waffle -- to be what Obama focuses on in Wednesday's speech. Obama has to "make people understand the cost of doing nothing," McMahon said. "Remind them that 75 percent of the conversations are around things that most people agree on -- including all of the insurance reforms."

Sure, voters may not be sure what they think about all the details in the reform plan (though poll results vary widely depending on how the plan is described and how the questions are asked). And yes, progressives will still be angry if the White House has to sell out to get its own party on board. But for Wednesday night, at least, Obama will try to focus everyone on a more basic point: Nothing will change at all if Congress fails to act.