Republicans try to condemn Rep. Joe Wilson's outburst, while supporting the sentiment behind it 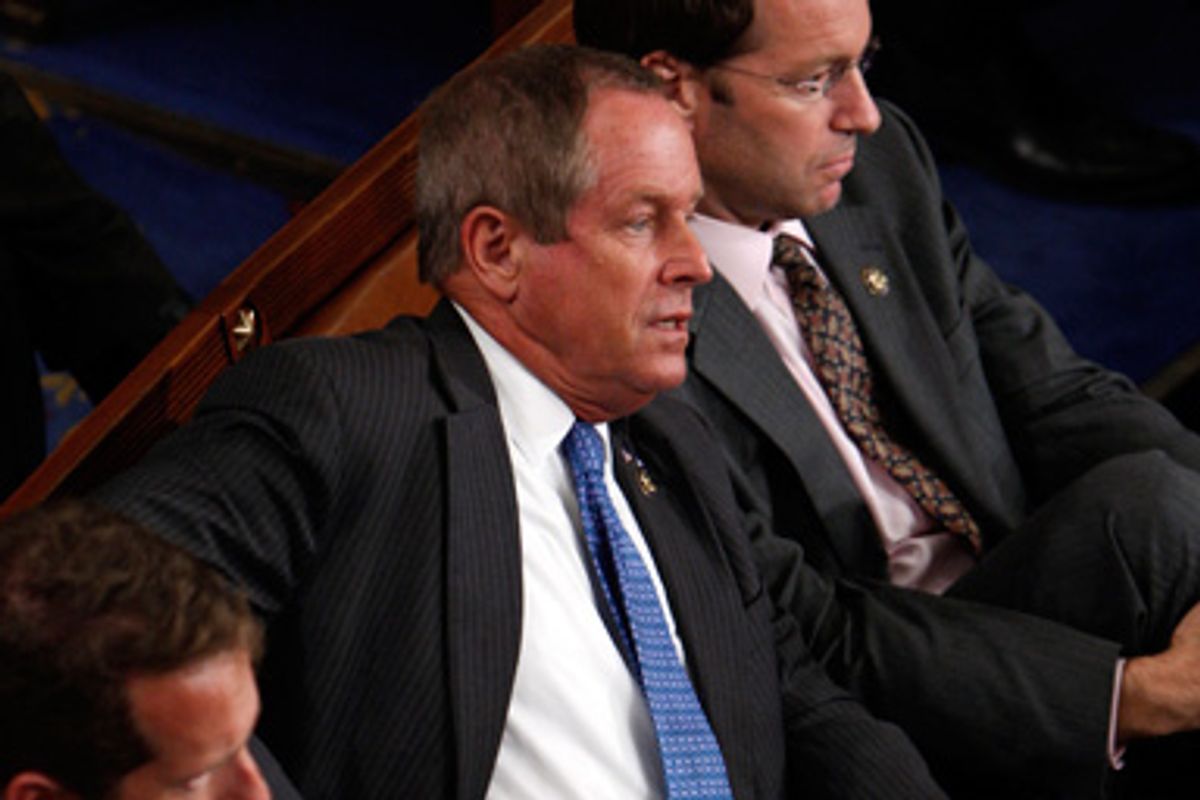 U.S. Representative Joe Wilson of South Carolina listens to President Obama's speech about healthcare reform to a joint session of the Congress on Capitol Hill in Washington, September 9, 2009.
--

Republicans spent the day Thursday doing a nifty little dance -- distancing themselves from Rep. Joe Wilson's angry outburst during President Obama's speech the night before, but still trying to find a way to blame Obama for the whole thing.

The second-ranking House Republican, Eric Cantor of Virginia, was a prime example. "I think all of us who know Joe Wilson know that he did the right thing in apologizing to this White House," Cantor said at a press conference Thursday morning. "I don't think anyone accepts the type of outburst and the lack of decorum in the House chamber, and I think Joe Wilson has also said as much, and he did the appropriate thing in apologizing."

But then, showing the nimbleness that must come naturally after enough campaign debates and press conferences, Cantor quickly turned the whole thing around.

"We all do need to dedicate ourselves to working in a civil manner to try and address a very important issue for the American people," Cantor said, sounding promising. "There [are] some severe disagreements over how we're going to affect health care reform in this country. And if you listen to what the president said, it's almost as if there is a certain amount of tone-deafness on the part of the White House." Ah! If only Obama hadn't been so tone-deaf, no one would have had to yell at him at all. And Cantor got there in just one easy step!

House Minority Leader John Boehner said the outburst -- while inappropriate -- showed the "amount of emotion that people are feeling" over what the GOP incessantly describes as a government takeover of healthcare. "And so Americans are frustrated," Boehner told reporters. "They're angry. And most importantly, they're scared to death that the country that they grew up in is not going to be the country that their kids and grandkids grew up in."

Wilson himself, speaking to reporters in a House hallway, pretty much stuck to the carefully tailored words of his apology press release from the night before, and he said he was moved spontaneously to shout at the president. (He had, though, promised his Twitter followers a couple days earlier that their shouts to "oppose Obamacare... would be relayed" back to the Capitol.)

Meanwhile, erstwhile Republican Arlen Specter, now a Democratic senator fighting a tough primary battle to hold onto his seat in Pennsylvania, displayed a convert's zeal for punishing Wilson's rudeness. "Rep. Wilson apologized immediately afterward but I don't think that's adequate," he wrote on his own Twitter feed, where he also called for Wilson to be officially rebuked by the House.

House Speaker Nancy Pelosi, though, told reporters pretty clearly that Democrats had better things to do than try to pass a resolution censuring Wilson over his conduct. "It's time for us to talk about health care and not Mr. Wilson," she said.

Somehow, she hadn't managed to convey that message to the Democratic Congressional Campaign Committee, the House Democrats' campaign operation; featured prominently on the DCCC Web site was a fundraising page asking for help bringing in $100,000 in 48 hours to "send a message to Republicans like Congressman Joe Wilson that we will not stand for our President to be called a liar in front of the nation." A DCCC aide told Salon that Wilson's Democratic opponent, Rob Miller, had raised more than $400,000 since the speech, with more than 11,000 individual contributors chipping in.