Where the White House is placing its healthcare bets

With the preliminaries over, the final sprint toward healthcare reform has begun 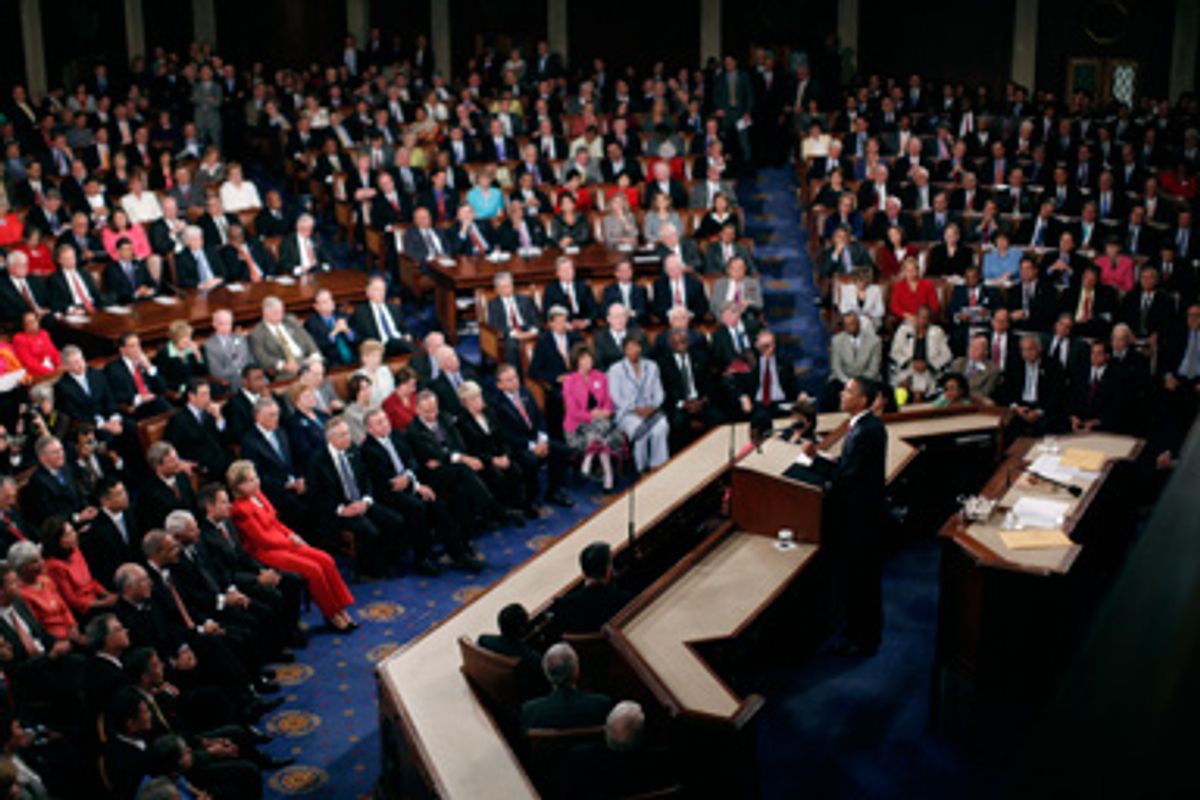 U. S. President Barack Obama delivers his speech on healthcare reform to a joint session of Congress on Capitol Hill in Washington, Sepatember 9, 2009.
--

The real political race for healthcare has just begun. The significance of the president's speech to Washington insiders was its signal about where the White House is placing its bets and its support. More on this in a moment. First, let's be clear about who's racing and why. Think of the speech as the starting gate of a two-month sprint between two competitors -- and they're not Democrats and Republicans.

On one side are America's biggest private insurers and Big Pharma. They're drooling over the prospect of tens of millions more Americans buying insurance and drugs because the pending legislation will require them to, or require employers to cover them. The pending expansion of Medicaid will also be a bonanza. Amerigroup Corp., UnitedHealth Group Inc. and other companies that administer Medicaid are looking at 10 million more customers. Healthcare Inc.’s Medicaid enrollment is expected to jump by 43 percent, according to its CEO. WellPoint Inc., the largest U.S. insurer, is also looking at big gains.

But the big insurers hate the idea of a public option because it will squeeze their profits. A true public option will force private insurers to compete in markets where there's now very little competition, and also have the bargaining power to force drug companies to offer lower prices. Big Pharma also wants to prevent Medicare and Medicaid from having the power to negotiate lower prices, for the same reason. Private insurers and Big Pharma would rather fudge the question of where the savings will come from or how all this will be paid for. They certainly don't want to pay for wider coverage with a surtax on the rich, because, hey, their executives and shareholders are mainly rich.

On the other side lies the Democratic base (organized labor, grass-roots progressives, leading activists) whose main goal is to make healthcare more affordable for a hundred million American families who are now paying through the nose (higher and higher co-payments, deductibles and premiums, not to mention wages that are depressed because of employer-provided health insurance), and affordable to the tens of millions who can't get it now. To this end, the Dem base wants a public option and wants Medicare and Medicaid to have negotiating power. That's because every dollar that's squeezed out of the private insurers and Big Pharma is a dollar saved by average Americans on their healthcare -- or a dollar saved by taxpayers who otherwise end up footing the bills for Medicare and Medicaid. There's simply no more direct way to control costs. And the Dem base isn't at all reluctant to put the burden of paying for wider coverage on the wealthy.

Private insurers and Big Pharma are being represented in this race by Max Baucus and his Senate Finance Committee. Senate Finance is on the verge of reporting out a bill that requires that just about every American have health insurance and just about every business provide it (or else pay a fee). But the bill will not include a public option. Nor will it change current law to allow Medicare to negotiate low drug prices. Nor will it include a surtax on the wealthy. The committee's only real nod to cost containment is a small tax on expensive insurance policies, which doesn't worry the private insurers because its cost is so easily passed on to the beneficiaries. The Democratic base is being represented by Nancy Pelosi and House Dems, who have reported out a bill that includes a public option, want Medicare and Medicaid to have negotiating power, and will pay for universal coverage with a surcharge on the rich. The Senate's Health, Education, Labor, and Pension Committee, formerly chaired by Ted Kennedy, also represents the Democratic base, and reported a strong bill that parallels that of the House.

Where's the White House? For months now, it's been straddling the fence -- reassuring the Dem base that the president is with them (he did it as recently as Monday with a rousing speech to organized labor), while at the same time nodding and winking in the direction of the private insurers and Big Pharma. Last spring the White House agreed to Big Pharma's demand that Medicare not be permitted to negotiate low drug prices in return for Pharma's agreement to support the healthcare bill emerging from the Senate Finance Committee. Since then it has quietly told private insurers that it will work with Senate Finance to find less potent alternatives to the public option, such as Kent Conrad's "cooperatives" or Olympia Snowe's "trigger" mechanism, in return for the private insurers' support of the compromise. And it has told the private insurers and Big Pharma that it will not support a surtax on the wealthy.

Obama's Wednesday night speech reassured the Democratic base that the president is deeply committed to getting universal coverage. But the speech also made clear that the White House has decided to side with the Senate Finance Committee and against the Democratic base on the details. The president was careful to note that a public option is only a means to an end and he remained open to other ideas (read: Conrad's cooperatives or Snowe's trigger). The speech included nothing about Medicare bargaining leverage, thereby letting the drug deal stand. The president clearly sided with Senate Finance on the funding mechanism of a tax or fee on high-end insurance rather than a surtax on the wealthy. And his promise to limit the costs of universal coverage to $900 billion put the president directly in league with the Senate Finance Committee rather than the House, whose bill is projected to cost more than $1 trillion.

The Dem leadership got the message. Yesterday, Senate Majority Leader Harry Reid said that while he favored a strong public option, he could be satisfied with establishment of nonprofit cooperatives. And Nancy Pelosi, who as recently as two weeks ago said the House would not support a bill that didn't include a public option, passed up a chance to say it was a non-negotiable demand. When pressed, she said that as long as legislation makes quality healthcare more accessible and affordable, "we will go forward with that bill."

But, again, the race has just begun. Your input is still important -- in fact, more important now than before. The Senate Finance's bill will be reported out next week and voted on by the entire committee in the following week, then go to the floor of the Senate for a vote in mid-October. The House bill will go to the floor at about the same time. Each side is now counting noses. Pelosi knows she won't have any Republicans with her, so will need to keep 40 Dems from bolting. If Reed can't get 60 votes by Oct. 15, he'll add healthcare to a reconciliation bill, which will need only 51.

The more you can make your voices heard, the more likely it is that the race will be won by the public rather than the private interests.