"The Informant!" Funny! Weird! Not all there! 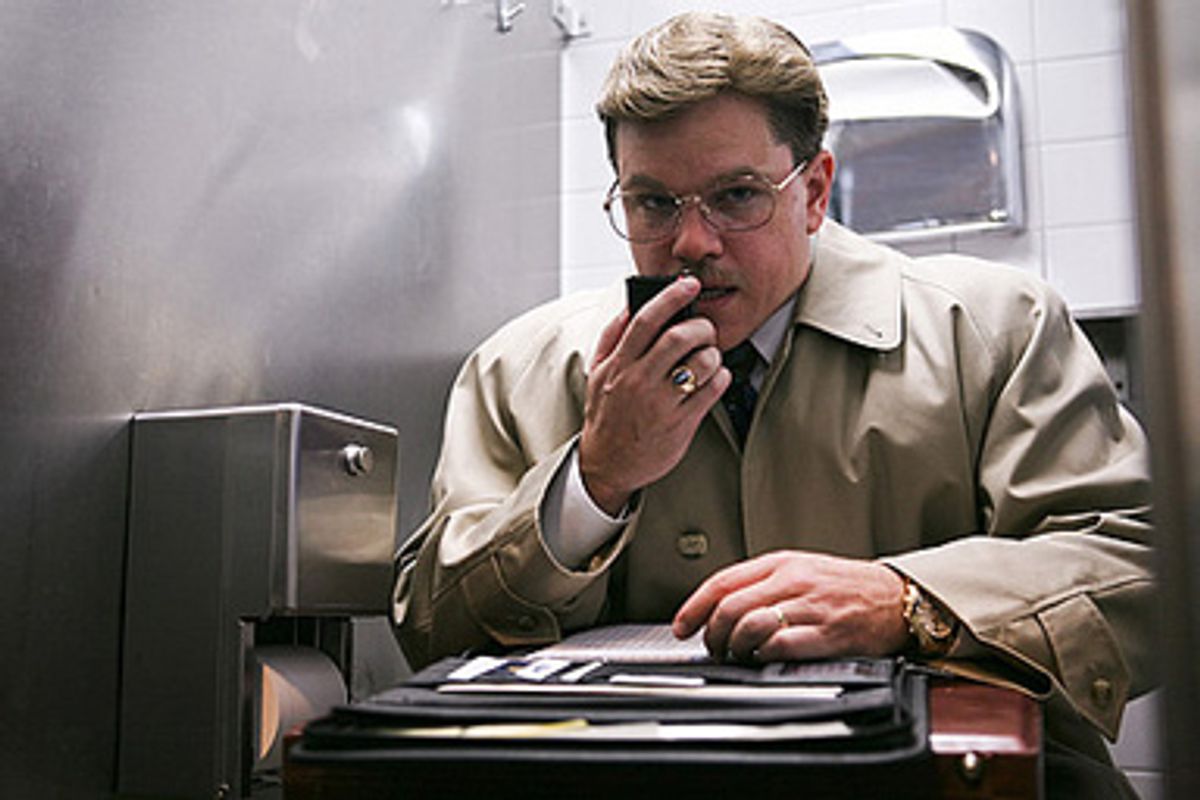 If the exclamation point doesn't clue you in, then the curlicue-serif '70s-style typeface of the opening credits and the soundtrack music by Marvin Hamlisch will. Steven Soderbergh's new movie, "The Informant!," is a deliberately arch and goofy affair, an exercise in neo-retro geek chic. It stars Matt Damon, clad in early-'90s guywear, chunky eyeglasses and a couple dozen extra pounds of pudge, in the way-strange-but-mostly-true story of Mark Whitacre, a high-level corporate whistle-blower who exposed an enormous price-fixing scheme at Archer Daniels Midland, the massive agribusiness conglomerate.

If the basic outline of "The Informant!" makes it sound a lot like Michael Mann's memorable, elegaic "The Insider," right down to taking a handsome Hollywood star (Russell Crowe, in that case) and making him look like a Middle American corporate shlub, the two films could hardly be more different in their effect. In large part, that reflects the facts: Whitacre spent three years as an FBI mole inside ADM, recording meetings and stealing documents, all while deceiving his FBI handlers about his own behavior and background. I'm going to tiptoe one step further into spoiler territory before backing away again: "The Informant!" is what you get if you take the plot and characters from "The Insider," jam them into the high-style yarn-spinning of "Catch Me If You Can," that Spielberg movie with Leonardo DiCaprio as a legendary con man, and top off with a dose of farcical espionage out of the Coen brothers' "Burn After Reading."

Damon's Whitacre, an Ivy League biochemist turned ADM V.P., is the star of his own story only up to a point, and that's the point where Soderbergh's appealing mixture of adventure, comedy and mystery begins to seem like a chemistry experiment gone awry, one where the bugs in the test tubes have eaten all the food and are trying to get out. To explore the difference between Whitacre's bland outward appearance and his inner world, screenwriter Scott Z. Burns employs one of the most overused character-cheat devices -- the internal monologue, heard as voiceover narration -- to frequently hilarious effect. At first the disparities are ordinary and completely innocent: He wonders whether the German luxury car is pronounced "porsh" or "portia," and thinks about those Oscar de la Renta ties that are always on sale at the mall because nobody buys them.

But even before Whitacre's plump, perennially nervous wife, Ginger (Melanie Lynskey, doing a creditable Winona Ryder impersonation), persuades him to talk to the FBI about ADM's attempts to fix worldwide prices of lysine -- an amino acid widely used in food, drugs and chemicals -- the viewer is likely to feel subtly unsettled by this guy. Although he's a well-paid senior executive, Whitacre is awash with financial resentment and barely aware of it. He has told senior ADM brass, including well-connected dumb-ass CEO Mick Andreas (Tom Papa) and security chief Mark Cheviron (Tom Wilson) about a convoluted sabotage-extortion plot involving ADM's Japanese competitors -- but we can't be sure whether the scheme exists at all.

For most of the ride, "The Informant!" is an adept and entertaining pastiche, livened up by numerous carefully overplayed supporting roles, including gimlet-eyed Scott Bakula as Brian Shepard, the FBI's Decatur, Ill., field agent who wound up as Whitacre's principal handler. Soderbergh is always a careful and thoughtful craftsman, and I don't doubt that he has reasons for this movie's eccentric choices: Although the principal action takes place between 1992 and 1995, the credits, the soundtrack music and the bleached-out, solarized images all suggest films from a period 15 to 20 years before that. My response to this oddness is a lot like my overall response to this odd film: I enjoyed it, in a momentary-diversion sort of way, without really being sure it was worth doing.

It's undeniably fun to watch Damon, in his bad toupee, feeble 'stache and thoroughly convincing heart-attack complexion, playing a guy so apparently stolid and earnest that he deludes himself and everybody around him and bumbles, apparently fearless, through his career as an untrained secret agent. There's a nifty scene when one of his FBI handlers gets angry with a superior's entirely logical question -- why would a $350,000-a-year corporate V.P. sell out his own company? -- and whips out a Christmas-card photo of Whitacre and his family. "We carry this around to remind ourselves that Mark Whitacre is a real person, with a real family, and that he's depending on us," he intones.

That isn't an answer, of course, but Soderbergh and screenwriter Burns only get partway to figuring out what a real answer might be. While "The Informant!" may bear a superficial resemblance to Soderbergh's Hollywood films, in spirit it's closer to his indie-auteur work. Like so many of his pictures, this one is about the slippery nature of truth and the fact that you can't find it in what people say, not even with the aid of high-tech equipment like Whitacre's concealed briefcase-recorder (or, say, a movie camera).

Not for the first time in his career, Soderbergh has made a mainstream film that is simultaneously a thought experiment. (See also "Solaris," his attempt to bridge the gap between Andrei Tarkovsky and the multiplex audience.) Will a mass audience show up for a sardonic comedy with a largely unsympathetic and totally untrustworthy hero, a movie that's somewhat too cool for its own good without quite reaching the Hitchcockian-Kubrickian heights to which it aspires? I guess we'll see.