Early odds on the Oscar derby 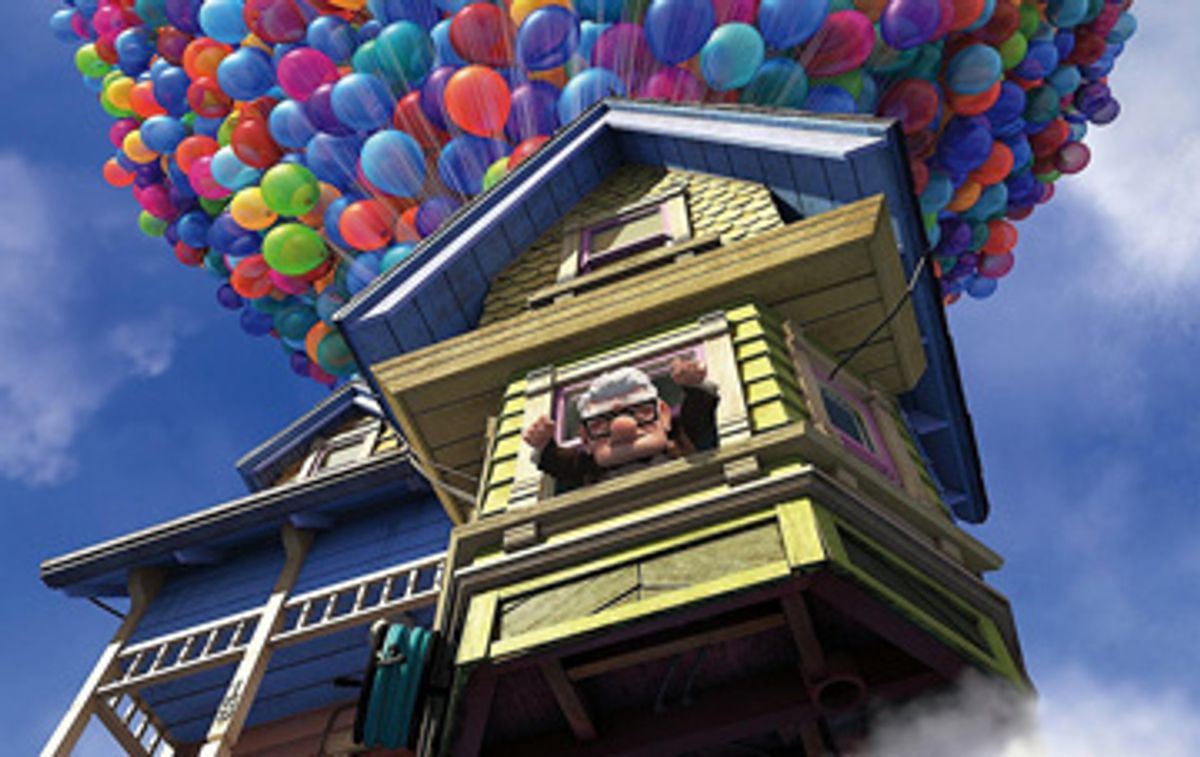 A still from "Up"

It's an autumnal phenomenon, as predictable in its own way as the first signs of red and gold in the treetops: As dozens of new movies flood the fall marketplace, most of them without a hope in hell of reaching a paying audience, people in the industry begin to protest that the film economy is finally and permanently broken. This year the alarm has been sounded by indieWire blogger Anne Thompson, long among the most levelheaded and reality-based of Hollywood reporters, and that fact has momentarily transfixed the attention-impaired elite of movieland.

"The old independent market is over," wrote Thompson last week, summing up the aftermath of the just-completed Toronto International Film Festival, which saw only a handful of modestly scaled distribution deals. "A new one will take its place. But we are smack in the middle between the end of one paradigm and the start of another, and it's a scary place indeed." Added Thompson, "I saw one movie after another [at Toronto] that was unreleasable in the current climate," predicting that most of the 145 films for sale at Canada's huge film marketplace "will wind up streamed, downloaded and viewed on a small TV or computer or mobile screen."

As one New York indie-film publicist told me recently, once you get below the level of the handful of quasi-independent pictures that will be released by big Indiewood players like Sony Pictures Classics, Magnolia, Weinstein or Miramax, the market these days is mostly about self-distribution. In practical terms, that means filmmakers paying to get their movies into theaters briefly, in order to generate some reviews so they can generate a little money from those small-screen venues Thompson is talking about. While I'm sure that method will pay off for occasional movies, it isn't much of a business model for the indie industry.

With Toronto in the rearview mirror and the New York Film Festival opening on Friday -- always the unofficial kickoff to award season -- it's time to ask another question about this year's movie marketplace: Where the hell are 10 best-picture Oscar nominees going to come from? The Academy's brilliant and/or desperate decision to double down for 2010 looks especially strange in a season that so far is bereft of either Oscar-friendly middlebrow hits or "Dark Knight"-style pop smashes with artistic pretensions. Needless to say, I don't know what the final list of nominees is going to look like, but I promise you this: One or two of them are really going to be from the moon.

But let's not get ahead of the game; it's only September. Here are the contenders as I see them right now (and I haven't seen all of them yet, not by a long shot). The list is organized solely according to what you might call the Rorschach principle; I thought of movies, and wrote them down, in this order:

"Bright Star" Universally beloved by critics, Jane Campion's Keats-in-love comeback vehicle sounds like a viable Oscar candidate, at least in theory. In practice, its opening week was tepid at the box office, and my hunch is that the Academy has turned away from costume romance, no matter how well executed, since the days of "Shakespeare in Love."

"A Serious Man" Low on movie-star wattage, this ambiguous fable set in 1960s Midwestern Jewish suburbia is the most overtly personal film Ethan and Joel Coen have ever made -- and I'm not alone in thinking it's one of their best. (More to come next week, including an interview with the Coens.) IndieWire editor Eugene Hernandez has declared "A Serious Man" to be the sleeper of awards season, and he could well be right. Having swept the floor with "No Country for Old Men" just two years ago, however, the brothers may be at a tactical disadvantage with Oscar voters.

"Broken Embraces" Do I actually believe that Pedro Almodóvar's latest overheated Spanish melodrama has a shot at Oscar gold? Well, no. But I do believe that having 10 best-picture nominees opens a slot for a token foreign-language film, and it might as well be a bubbling-over potboiler with Penélope Cruz in it, playing the doomed lost love in a story-within-a-story told by a film and literary icon (Lluís Homar) who was blinded in a terrible accident. Got all that? Haven't seen this yet; needless to say I can't wait.

"Up" Another lovely, wistful kid-adult crossover from the Disney/Pixar factory, and in any earlier year it'd be automatically consigned to the animated feature category. "Up" will still win that award, but given widespread disappointment over the non-nomination of "Wall-E" last year, it also seems just possible that this heartwarming tale of two outcasts on a quasi-mystical balloon journey will garner a nod for the big prize.

"The Hurt Locker" There was considerable Oscar buzz around Kathryn Bigelow's Iraq bomb-squad flick after its release, which largely reflected Hollywood's affection for the oft-overlooked ex-wife of James Cameron, as well as a collective sigh of relief that somebody had finally made a movie about the Iraq conflict that audiences would actually pay to sit through. You hear a lot less of that now. Like most of Bigelow's movies, it's a terrific mind-fuck actioner, probably best viewed with the dialogue dubbed into another language. I'm thrilled to have her back, but a best-picture nominee? Probably not.

"Up in the Air" Two words: Oh. Yeah. Now, I haven't seen Jason Reitman's adaptation of Walter Kirn's tragicomic novel about a corporate downsizing consultant (George Clooney) and maybe I'll decide it sucks. But word out of Telluride and Toronto has been outstanding, and from a strategic-positioning point of view, everything about this project -- the pedigree of star and director, the seriousness of the theme, an acclaimed supporting cast featuring Jason Bateman and Vera Farmiga -- feels right. Oscar front-runner, until something else comes along.

"The Men Who Stare at Goats" This is the season's other Clooney vehicle, in which he stars alongside Ewan McGregor, Kevin Spacey and Jeff Bridges in an implausible-but-not-quite-true story about a secret psychic unit within the United States Army. Sounds like a pretty darned entertaining premise, but there must be a reason that virtually nobody who has seen it is talking this one up as Oscar fodder.

"Get Low" One of Toronto's few breakout films, this directing debut for Aaron Schneider was just collected by Sony for probable year-end release. A folktale-flavored Depression-era yarn about a small-town Tennessee eccentric (Robert Duvall) who stages his own funeral while still alive, "Get Low" also features Bill Murray, Sissy Spacek and Lucas Black. In other words, as much rural Americana and indie cred as you could possibly want, with some left over.

"An Education" This winsome little surprise about a teenage girl's coming-of-age in pre-swinging London was the unexpected delight of Sundance last winter, but it's the kind of movie that won't stand much hype. Suffice it to say that Carey Mulligan gives a star-making performance -- she's the Oscar nominee here, frankly -- and director Lone Scherfig handles the period, and Nick Hornby's screenplay, with tremendous finesse.

"Precious: Based on the Novel 'Push' by Sapphire" This is the first film ever to win audience awards at both Sundance (where it was shown as "Push") and Toronto, mainly because most movies that generate buzz don't remain on the festival circuit for more than nine months. Still, a picture that was initially perceived as an unmarketable downer -- the story of an overweight, illiterate, twice-pregnant Harlem teenager, made by little-known director Lee Daniels -- has gradually been transformed into a bona fide Oscar contender. Having Oprah Winfrey and Tyler Perry as executive producers hasn't hurt, but even infotainment magnates as powerful as they cannot control audience response -- and the response to this movie, and its leading performances by Gabby Sidibe and Mo'Nique, has been electric.

"The Lovely Bones" I haven't even spoken to anybody who's seen this, and it remains faintly possible that Peter Jackson's screen version of Alice Sebold's narrated-from-the-other-side bestseller won't be ready for pre-Christmas release. Still, with that pedigree and a cast headed by Mark Wahlberg, Rachel Weisz and Susan Sarandon, Jackson will have to screw it up pretty badly not to be included in the Oscar conversation.

"Nine" No, not "District 9" or "Cloud Nine" or "9," but director Rob Marshall's screen version of the hit Broadway musical inspired by Fellini's "8 1/2." If you're confused, you've identified one of this mega-production's potential pitfalls. With seven credited writers, eye-popping production values and a cast that features recent Oscar winners Daniel Day-Lewis and Marion Cotillard, along with Penélope Cruz, Judi Dench, Nicole Kidman and Sophia Loren, producer and distributor Harvey Weinstein's got to be hoping for major hardware to get this expensive project into the black.

"The Road" Redolent of artistic seriousness, this post-apocalyptic fable from Aussie director John Hillcoat ("The Proposition") is adapted from a Cormac McCarthy novel and stars Viggo Mortensen and Charlize Theron as its protagonists, dubbed only "Man" and "Wife." (Guy Pearce and Robert Duvall also star.) Film-festival response has been superlative, and Mortensen and Theron have established themselves as beloved stalwarts of the Hollywood left. They're both in the running for acting awards, but my sight-unseen guess is that "The Road" may prove too unforgiving for best-picture voters.

"Inglourious Basterds" Kind of a cool idea, but I don't buy it -- and only partly because I didn't much like the movie. Christoph Waltz is absolutely going to be nominated as a supporting actor, but Hollywood simply ain't giving its big prize to a spectacle this disorganized, anarchic and sadistic.

"Star Trek" Exactly the sort of film the extra best-picture slots were supposed to benefit. J.J. Abrams pulled off a neat rebooting of the franchise, and I quite enjoyed it. But best picture? Nah. "Star Trek" is a nicely made summer popcorn movie that will reap the usual benefits, those being in the technical award categories.