The sitcom star and super-Christian is giving away a new version of "On the Origin of Species," and it's got Nazis 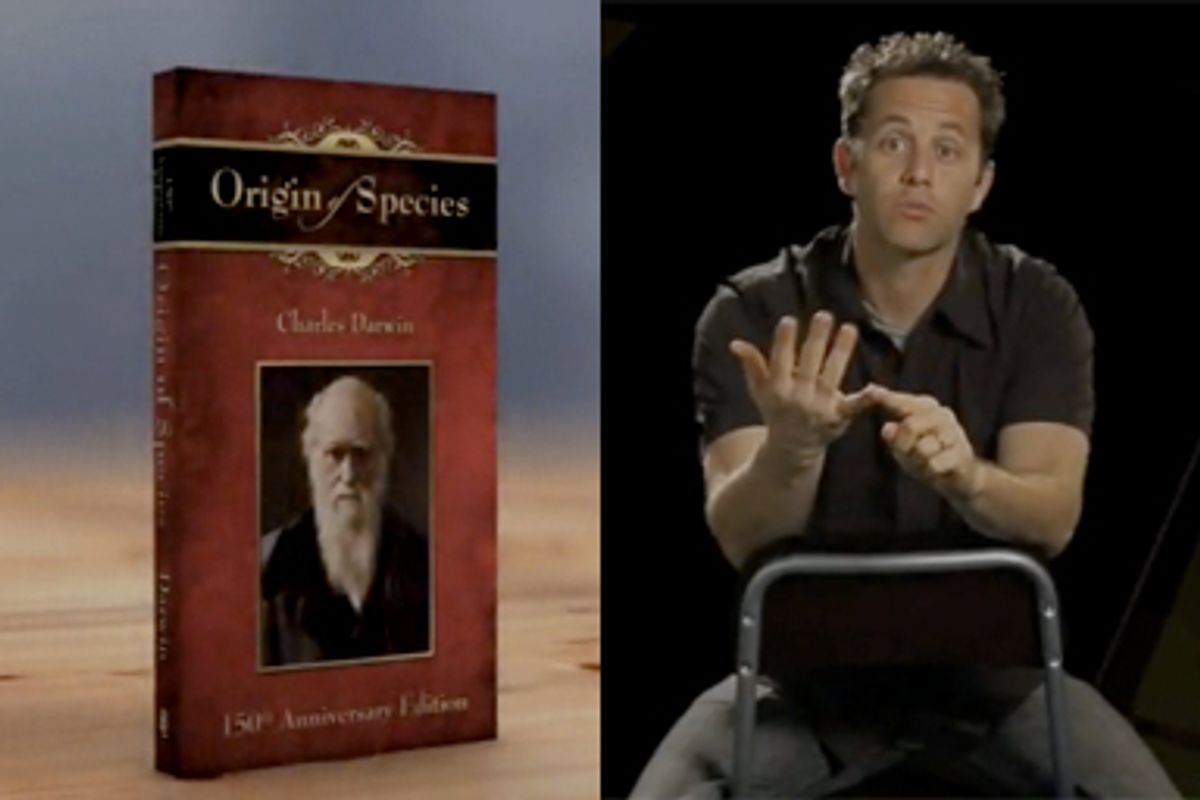 In November, Charles Darwin’s history-changing “On the Origin of Species” turns 150. And after a century and a half of archaeological discoveries and biological advances lending credence to his evolutionary theories, even Darwin would have to be impressed with the sheer endurance of those who prefer the literal, biblical version of how we all got here. People like '80s sitcom star-turned-Christian action hero Kirk Cameron.

Celebrations and exhibitions commemorating “Origin’s" publication are gearing up across the world, but Cameron and his God squad are not going to sit around quietly while monkey ancestry gets peddled to America’s youth. On Nov. 21, they’re handing "the truth" straight to them -- in the form of 50,000 free copies of Darwin’s book, amended with a 50-page introduction refuting the whole megillah, at the top 50 college campuses across the country. Watch the promotional clip for the "Origin Into Schools" campaign here:

You can say there's inherent idiocy in the creationist worldview (you'd be right), but this is not the worst idea ever. Rather than resorting to the old tried-and-true method of simply attempting to silence evolutionary teaching, they’re leaning on the classic American standby: freedom of speech. Emphasis on the “free.”

On that rich-with-gravitas promotional clip, Cameron begins by declaring, “Our kids can no longer pray in public,” a provocative and completely inaccurate assertion, as anyone familiar with the term “public” knows. He then narrows in for the killer point: “A recent study revealed that in the top 50 universities in our country, in the fields of psychology and biology, 61 percent of the professors described themselves as atheist or agnostic.” True, though he fails to point out that the same study found only 23.4 percent of college professors overall declare themselves atheist or agnostic. College: still pretty damn godly!

But that matters not, because according to the artist formerly known as Mike Seaver, “an entire generation is being brainwashed by atheistic evolution.” He wants us to mend the “sinful heart” of our nation. Of course, plenty of people, from Darwin himself to Pope Benedict, have been able to reconcile religious beliefs with a respect for the profound elegance of science. Those people, however, didn’t star in “Left Behind,” or the highest-grossing independent film of 2008 -- a "love dare" romance called "Fireproof." That’s where Cameron's considerable star power -- and his giveaway plan -- come in.

You see, in addition to being atheistic and sinful, Darwin’s tome is also public domain. Want to run off a few thousand copies? Have at it, and get noted crackpot Ray Comfort to whip up a lively preface. Comfort is the author of “Bride of Heaven, Pride of Hell” and “End Time Believer's Bible,” a man who can be counted upon to point out “Hitler’s undeniable connection with [evolution]" and “the absence of any species-to-species transitional forms actually found in the fossil record.” (Apparently Cameron is not on the American Geological Institute’s mailing list.) Next up? Arrive at a few dozen universities, because as Cameron confidently says, “What are they going to do? Ban ‘The Origin of the Species?’ That'd be big news!”

And once those godly volunteers get on campus, what 19-year-old wouldn’t clamor for a 19th-century tract amended by someone whose argument for the evidence of God is the existence of the banana? Just to prove their point that college students will be snarfing these like Doritos, the Origin Into Schools video ends with a clip of the book recently being handed out at Cerritos College. Students walk by briskly, nonchalantly accepting the giveaway. Well, sure they do. They're college students. You should see what they'll do for a free trucker hat.

It’s easy to laugh at the absurdity of the project. It’s already being widely mined for its rich comic value, notably by a hot blond Romanian woman, who suggests maybe we get Richard Dawkins to do a new introduction to the Bible:

But what's not funny is what happens when “the opposing -- and correct -- view” gets into the hands of "our future doctors and lawyers and politicians." That's when they realize they're holding a sneaky defilement of one of the most important books ever written. Nowhere on the front of the “beautiful, full color cover edition” are the words “extremist Christian version.” Because maybe if those targeted 50,000 students knew they were getting their free book from a ministry that advises its practitioners on how to “shut up” a Jew or explain to a homosexual that he’s damned, they might not be so keen on it. They might feel duped and angry at accepting something from a group that proclaims free speech but doesn’t have the courage to put its true intentions right there on the cover.

Darwin, however, might have been amused. “I love fools’ experiments,” he once said. “I am always making them.”