Why Chicago didn't want the Olympics

The city's 2016 bid would have had more support if it benefited everyone, not just Mayor Daley and his cronies 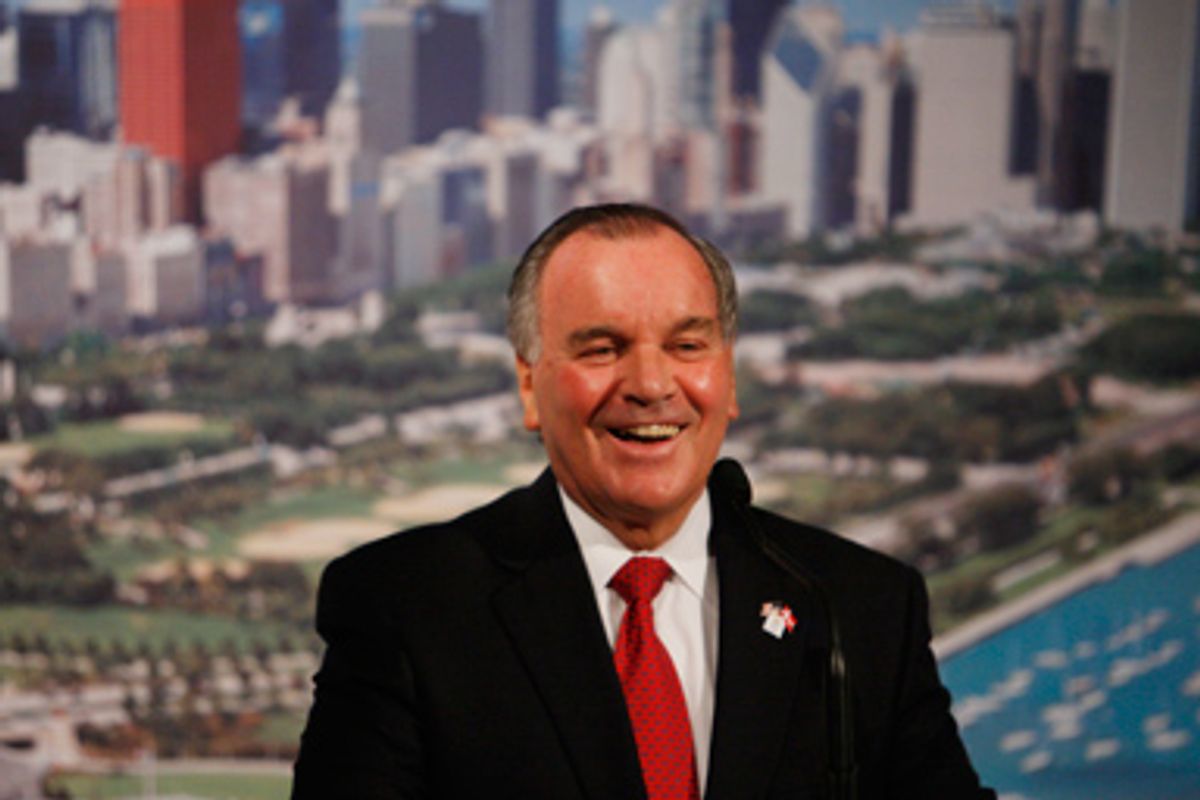 Standing in front of a backdrop of the Chicago skyline, Chicago Mayor Richard M. Daley speaks at a dinner in support Chicago hosting the 2016 Summer Olympics, Wednesday, Sept. 30, 2009, in Copenhagen.
--

Barack Obama, Oprah Winfrey and Mayor Richard M. Daley are in Copenhagen Friday morning, trying to persuade the International Olympic Committee that Chicago -- our stormy, husky, brawling, crooked city by the lake -- is the best place on Earth for its quadrennial track meet. No, your marathon runners won't step in a pothole on Lake Shore Drive, caused by a no-bid asphalt contractor. No, the Olympic Stadium won't sell Polish dogs for $14.95. That only happens at the airport. Yes, it's safe to step into an abandoned garage on Valentine's Day -- gangsters with tommy guns went out 80 years ago. Now we have gangbangers who beat people to death with railroad ties.

For the sake of our national pride, let's hope the O-Team gets a better reception than the bid committee president received in my neighborhood over the summer, as part of a ward-by-ward campaign to sell Chicagoans on the Games. In a crowded conference room at a branch library, Lori Healey stood between two husky Paralympians and cued up a glossy promotional video. We saw a computer-generated Olympic stadium. We heard Atlanta Mayor Shirley Franklin swear that, after her city's 1996 Games, "Educational institutions got stronger, and people got jobs and they expanded their businesses. There is no lose."

We even heard from Obama, who showed up at an Olympic rally during last year's presidential campaign, throwing his arm around a beaming, flushed Mayor Daley.

"Bringing the Olympics to Chicago will be a capstone in the success that we've had in the last couple of decades in transforming Chicago, not only into a great American city, but into a great world city," he promised.

Then we got to ask questions. If a representative from competing city Rio de Janeiro had been in that room, he would have sambaed home with delight.

"I don't find the Atlanta mayor's comments particularly convincing," one young man said. "You would expect that someone who decided to get the Olympics would say it's a good idea. I'm more curious about what community members have to say after the fact."

The room sizzled with applause. A woman who works with the homeless wanted to know how much of the Olympic Village would be converted to affordable housing. Another guy suggested the city could fix the El with the $4.8 billion the Olympics are expected to cost.

"The money being spent is not public money," said a member of the committee.

"We don't believe that," the questioner retorted.

No, we don't. Chicago's Olympic bid has divided the city right down the middle, and brought out the resentment of those who eat at Al's Italian Beef toward those who meet for lunch at Spiaggia. According to a recent Chicago Tribune/WGN poll, only 47 percent of Chicagoans favor bringing the Games here, while 45 percent oppose it. On Tuesday, six people were arrested for torching an Olympic banner and hassling workmen trying to hang a giant medal around the Picasso statue in Daley Plaza. A site called Chicagoans for Rio is an Internet hit.

Why are Chicagoans so pissy about an event that will make us the center of world attention for two weeks?

The vote in Copenhagen comes as Daley's popularity is at the lowest point in his 20-year mayoralty. Chicagoans have a remarkable tolerance for public corruption and insider deals, but this year, we finally snapped. The mayor rammed a deal through the City Council to lease the street parking concession to a private firm for $1.1 billion. Parking rates doubled and tripled. The Department of Revenue hired extra meter readers to slap tickets on motorists a minute late in paying. A study by the inspector general showed the city could have earned an extra billion by hanging onto the meters. Chicago also has the highest sales tax of any big city in the nation (10.25 percent), and a network of street-corner cameras is spitting out $100 tickets for rolling right turns on red.

Anti-Olympians are unwilling to bleed even more money for a Games they see as a vanity project to revive Daley's approval ratings, and a boondoggle that will benefit the city's elite, at the expense of ordinary Chicagoans. When the IOC demanded that the city cover all cost overruns, the City Council voted 49-0 to guarantee unlimited public funds. Even though the Council will have oversight over Olympic spending, there's a suspicion that the Olympic Village, the velodrome, the swimming pool, the white-water rafting course, the hurdles and the starting blocks will all be built by the mayor's pals, at inflated prices. That's how Chicago works.

Alderman Richard Mell, best known as Rod Blagojevich's father-in-law, promised that taxpayers would be safe "unless a meteor hits us two days before." Which sounded like Montreal Mayor Jean Drapeau's pledge that "the Olympics can no more lose money than a man can have a baby." Montreal spent 30 years paying off $1 billion in Olympic debt.

Obama is risking an international embarrassment in Denmark to help the mayor who backed his presidential campaign. But his friends stand to benefit, too. As Time magazine reported, the 13-member bid committee includes FOBs John Rogers Jr. and Marty Nesbitt, who have supported Obama since he was the long-shot black candidate for the U.S. Senate. And "many of Obama's biggest boosters are heavily invested in the real estate and tourism industry."

Daley is in a Zeus-and-Cronos competition with his father for the title of Chicago's Greatest Mayor. Next year, he'll break the old man's record of 21 1⁄2 years in office. (If Chicago wins the Olympics, he's expected to stay until 2016, at least, so he can wave the Olympic flag and, maybe, light the torch himself.) Richard M. has already made a claim for himself as Boss of All Bosses by putting a Chicagoan in the White House. The Olympics would seal his victory. Richard J. only brought the Pan-American Games here.

To Daley, the Olympics would be Chicago's biggest moment since the Columbian Exposition of 1893, the world's fair that announced Chicago's arrival as a great American city. A Chicago Olympics, opened by a Chicago president, would make us a world-class city, in his mind. Daley could also lay claim to stamping out Chicago's oldest civic complexes: the Second City label (New York didn't get the Olympics), and the specter of Al Capone. Around the U.S., Capone has long ceased being the face of the city. But there are still foreigners who hear the word "Chicago" and think of a pinstriped gangster in a double-breasted suit, carrying a violin case.

Years ago, I met a Latvian sailor in port here. He pointed at the four-star flag on a police car.

"Flag for Illinois?" he asked.

He was referencing a Russian-made gangster flick that is set here and was released just nine years ago yet still includes a character who dresses like Capone. Then he cocked his fingers and made machine-gun noises with his lips, pretending to spray the street. That's international sign language for Chicago.

In the 1990s, Michael Jordan made some headway in changing the city's image. Obama has done even more (foreigners who used to take "gangster tours" now gape at Obama's favorite barber shop), but putting the city on international TV for 16 days would finish the job of showing the world that Chicago has advanced far beyond "The Untouchables" and the St. Valentine's Day massacre.

For that to happen, Obama and Daley will have to do a better sales job on the IOC than they've done on their own hometown. We can't win the Olympics with 47 percent of the vote.