A story that at first seems like an Onion gag continues to feel that way upon further reflection. 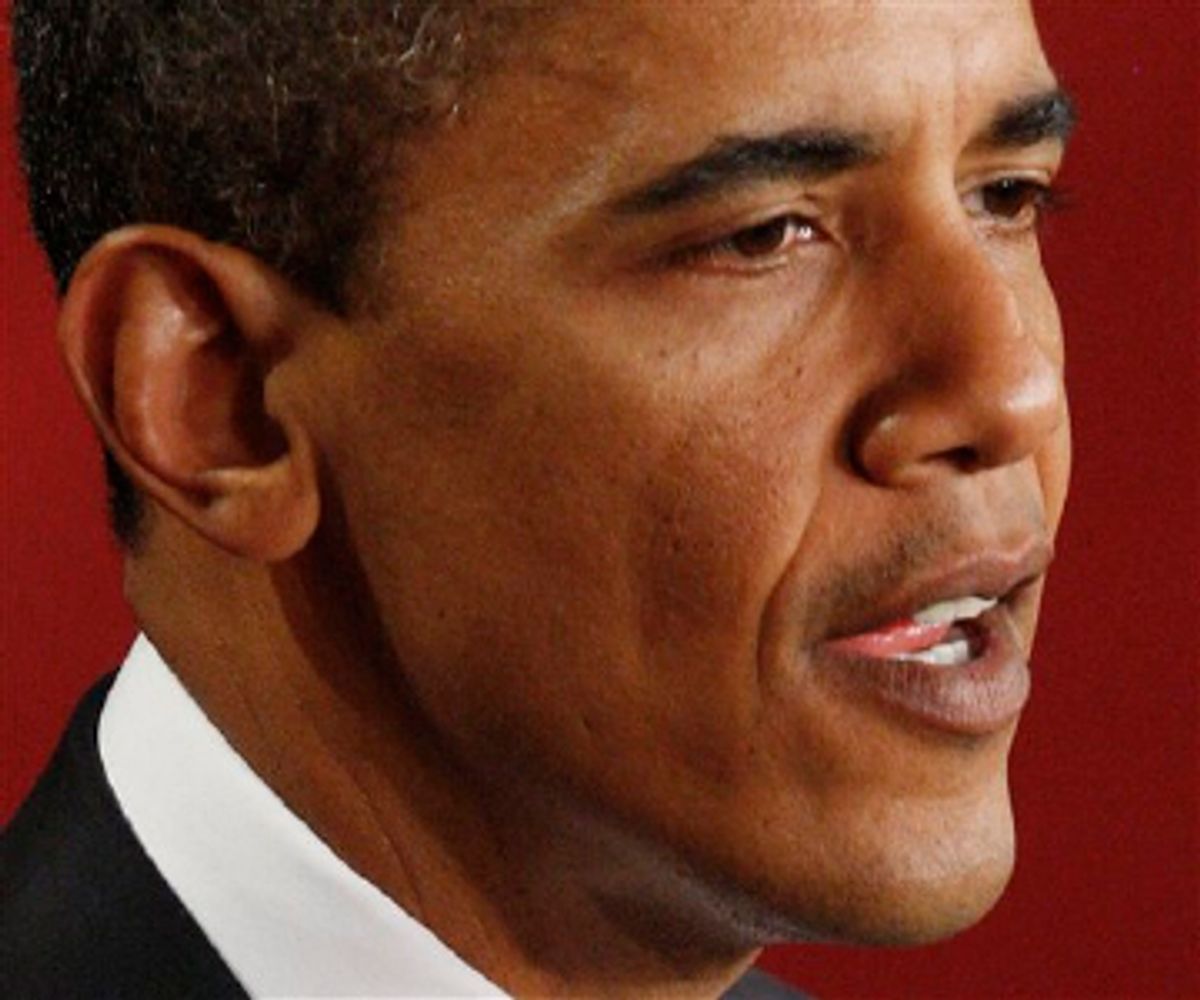 When I saw this morning's top New York Times headline -- "Barack Obama Wins Nobel Peace Prize" -- I had the same immediate reaction which I'm certain many others had:  this was some kind of bizarre Onion gag that got accidentally transposed onto the wrong website, that it was just some sort of strange joke someone was playing.  Upon further reflection, that isn't all that far from the reaction I still have.  And I say that despite my belief that -- as critical as I've been of the Obama presidency regarding civil liberties and Terrorism -- foreign affairs is actually one area where he's shown genuine potential for some constructive "change" and has, on occasion, merited real praise for taking steps in the general "peace" direction which this Prize is meant to honor.

Obama has changed the tone America uses to speak to the world generally and the Muslim world specifically.  His speech in Cairo, his first-week interview on al-Arabiya, and the extraordinarily conciliatory holiday video he sent to Iran are all substantial illustrations of that.  His willingness to sit down and negotiate with Iran -- rather than threaten and berate them -- has already produced tangible results.  He has at least preliminarily broken from Bush's full-scale subservience to Israel and has applied steadfast pressure on the Israelis to cease settlement activities, even though it's subjected him to the sorts of domestic political risks and vicious smears that have made prior Presidents afraid to do so.  His decision to use his first full day in office to issue Executive Orders to close Guantanamo, ostensibly ban torture, and bar CIA black sites was an important symbol offered to the world (even though it's been followed by actions that make those commitments little more than empty symbols).  He refused to reflexively support the right-wing, civil-liberty-crushing coup leaders in Honduras merely because they were "pro-American" and "anti-Chavez," thus siding with the vast bulk of Latin America's governments -- a move George Bush, or John McCain, never would have made.  And as a result of all of that, the U.S. -- in a worldwide survey released just this week -- rose from seventh to first on the list of "most admired countries."

All that said, these changes are completely preliminary, which is to be expected given that he's only been in office nine months.  For that reason, while Obama's popularity has surged in Western Europe, the changes in the Muslim world in terms of how the U.S. is perceived have been small to nonexistent.  As Der Spiegel put it in the wake of a worldwide survey in July:  "while Europe's ardor for Obama appears fervent, he has actually made little progress in the regions where the US faces its biggest foreign policy problems."  People who live in regions that have long been devastated by American weaponry don't have the luxury of being dazzled by pretty words and speeches.  They apparently -- and rationally -- won't believe that America will actually change from a war-making nation into a peace-making one until there are tangible signs that this is happening.  It's because that has so plainly not yet occurred that the Nobel Committee has made a mockery out of their own award.

But far more important than the lack of actual accomplishments are some of the policies over which Obama has presided that are the very opposite of peace.  Already this year, he not only escalated the American war in Afghanistan, but has ordered air raids that have produced things like this: 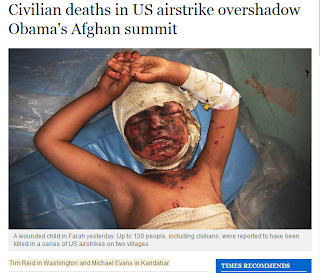 That was from a May airstrike in which over 100 Afghan civilians were killed by American jets -- one of many similar incidents this year, including one only a week ago that killed 9 Afghan civilians.  How can someone responsible for that, and who has only escalated that war, possibly be awarded the Nobel Peace Prize in the very same year that he did that?  Does that picture above look like the work of a Nobel Peace laureate?  Does this, from the May airstrike? 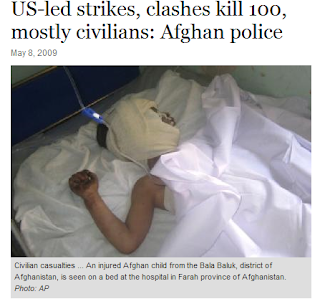 Beyond Afghanistan, Obama continues to preside over another war -- in Iraq:  remember that? -- where no meaningful withdrawal has occurred.  He uttered not a peep of opposition to the Israeli massacre of Gazan civilians at the beginning of this year (using American weapons), one which a U.N. investigator just found constituted war crimes and possibly crimes against humanity.  The changed tone to Iran notwithstanding, his administration frequently emphasizes that it is preserving the option to bomb that country, too -- which could be a third war against a Muslim country fought simultaneously under his watch.  He's worked tirelessly to protect his country not only from accountability -- but also transparency -- for the last eight years of war crimes, almost certainly violating America's treaty obligations in the process.  And he is currently presiding over an expansion of the legal black hole at Bagram while aggressively demanding the right to abduct people from around the world, ship them there, and then imprison them indefinitely with no rights of any kind.

It's certainly true that Obama inherited, not started, these conflicts.  And it's possible that he could bring about their end, along with an overall change in how America interacts with the world in terms of actions, not just words.  If he does that, he would deserve immense credit -- perhaps even a Nobel Peace Prize.  But he hasn't done any of that.  And it's at least as possible that he'll do the opposite:  that he'll continue to escalate the 8-year occupation of Afghanistan, preside over more conflict in Iraq, end up in a dangerous confrontation with Iran, and continue to preserve many of the core Bush/Cheney Terrorism policies that created such a stain on America's image and character around the world.

Through no fault of his own, Obama presides over a massive war-making state that spends on its military close to what the rest of the world spends combined.  The U.S. accounts for almost 70% of worldwide arms sales.  We're currently occupying and waging wars in two separate Muslim countries and making clear we reserve the "right" to attack a third.  Someone who made meaningful changes to those realities would truly be a man of peace.  It's unreasonable to expect that Obama would magically transform all of this in nine months, and he certainly hasn't.  Instead, he presides over it and is continuing much of it.  One can reasonably debate how much blame he merits for all of that, but there are simply no meaningful "peace" accomplishment in his record -- at least not yet -- and there's plenty of the opposite.  That's what makes this Prize so painfully and self-evidently ludicrous.

UPDATE:  Remember how, during the Bush years, the GOP would disgustingly try to equate liberals with Terrorists by pointing out that they happened to have the same view on a particular matter (The Left opposes the war in Iraq, just like Al Qaeda and Hezbollah do! or bin Laden's criticisms of Bush sound just like Michael Moore's! ).  It looks like the Democratic Party has learned and adopted that tactic perfectly ("'The Republican Party has thrown in its lot with the terrorists - the Taliban and Hamas this morning - in criticizing the President for receiving the Nobel Peace prize,' DNC communications director Brad Woodhouse told POLITICO"; Republicans are "put[ting] politics above patriotism," he added).

Apparently, according to the DNC, if you criticize this Prize, then you're an unpatriotic America-hater -- just like the Terrorists, because they're also criticizing the award.  Karl Rove should be proud.  Maybe the DNC should also send out Joe Lieberman's 2005 warning that "in matters of war we undermine Presidential credibility at our nation’s peril."  Hamas also thinks that Israeli settlements should be frozen -- a position Obama shares.  So, by the DNC's Rovian reasoning, doesn't this mean that Obama "has thrown in his lot with the terrorists"?

UPDATE II:  On Democracy Now, Naomi Klein calls Obama's award "disappointing, cheapening of the Nobel Prize," and adds:  "I think it’s quite insulting. I don’t know what kind of political game they’re playing, but I don’t think that the committee has ever been as political as this or as delusional as this, frankly."  On Daily Kos, Michael Moore writes ironically:  "Congratulations President Obama on the Nobel Peace Prize -- Now Please Earn it!"  Mairead Maguire, the 1976 Nobel Peace Prize Winner, says she's "very disappointed" with this award, noting:  "President Obama has yet to prove that he will move seriously on the Middle East, that he will end the war in Afghanistan and many other issues."   And my Salon colleague, Alex Koppelman, adds several thoughts about the efforts by the DNC and some Democratic groups to explicitly equate opposition to the Prize with "casting one's lot with terrorists."