Are we bipartisan now? 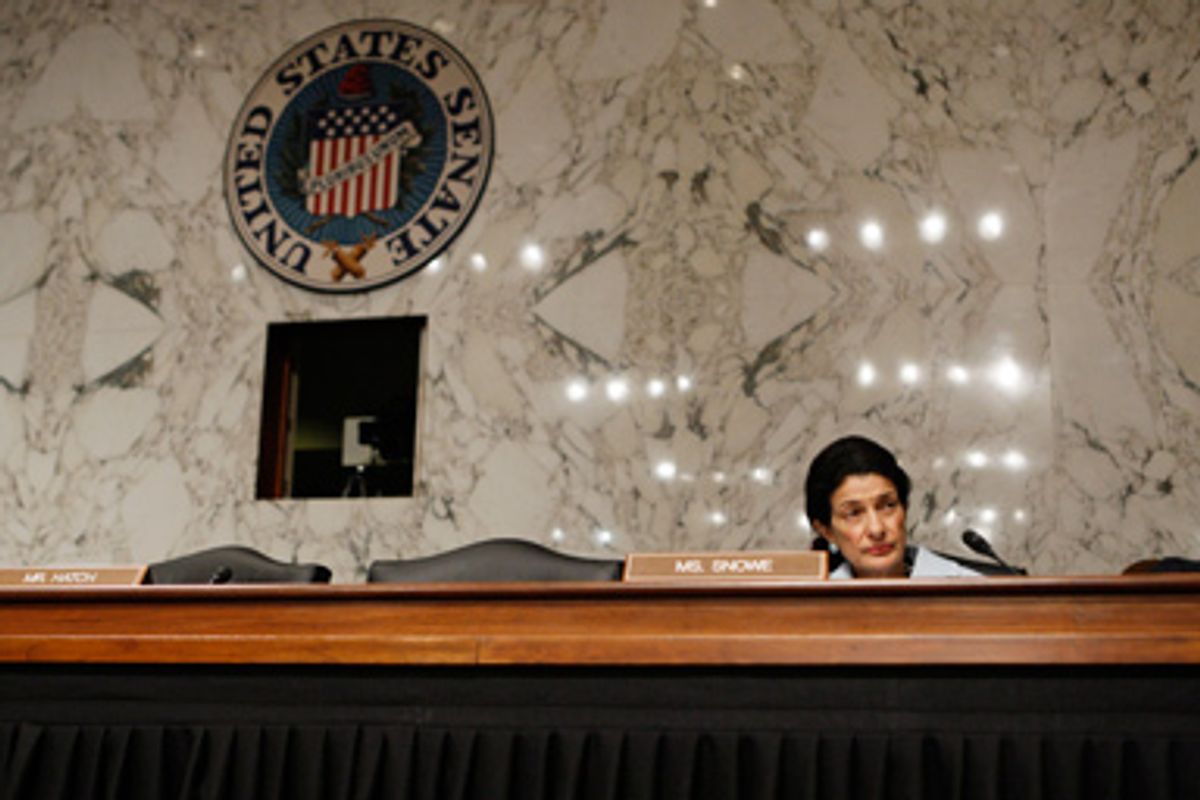 Senate Finance Committee member Sen. Olympia Snowe, R-Maine, sits amidst empty seats on the Republican side of the dais during the committee's hearing regarding health care reform, Tuesday, Oct. 13, 2009, on Capitol Hill in Washington.
--

In the end, Max Baucus -- and the White House -- finally got his long-lost Republican support for healthcare reform.

OK, so it was only one Republican, Olympia Snowe of Maine. Fine, so her support wasn't sewn up until the last few hours of debate Tuesday on a relatively conservative Senate Finance Committee proposal, after literally months of work that had been fruitless up to then. And yes, it came as a bit of a surprise, and with no promise that Snowe would stick with the reform plans down the line. "Is this bill all I would want?" she asked. "Far from it. Is it all it can be? No. But when history calls, history calls."

For now, at least, history did call. The Finance Committee's 14-9 vote to approve the legislation means all five of the House or Senate panels with jurisdiction over healthcare have passed a bill. No other reform proposal has ever gotten this far. And Snowe's support -- no matter how grudging, or temporary, it proves to be -- was all the Obama administration needed to run with the notion of bipartisanship that Democrats hope will be catnip to swing voters (and moderate lawmakers in their own party).

"The fifth and final committee responsible for healthcare reform has passed a proposal that has both Democratic and Republican support," Obama said late Tuesday afternoon, in an appearance before TV cameras added to his schedule only after the Finance vote. He singled out Snowe -- and Baucus -- by name, though that may not make up for the rhetorical spitballs Republicans will lob at Snowe, or the ones Democrats have been aiming Baucus' way all year. "I want to particularly thank Senator Olympia Snowe for both the political courage and the seriousness of purpose that she's demonstrated throughout this process."

Republicans, predictably enough, grumbled that the bill wasn't really bipartisan, and that at any rate it would change before Congress finally passes any reform plan. And they kept up the fear-mongering that seeped into the healthcare debate over the summer. "What they really want is a single-payer system," said Sen. Orrin Hatch, R-Utah. "If we ever go to that system we'll rue the day." The whole situation is sort of a case of turnabout as fair play; if people like Joe Lieberman and Ben Nelson could go through eight years of the Bush administration giving "bipartisan" cover to wars and tax cuts, the GOP doesn't have much credibility in complaining that Snowe's vote doesn't count now. (Lieberman may be back to his old ways, anyway -- he told Don Imus Tuesday he wasn't sure he'd vote for the bill himself.)

What may be more important down the line is what Obama and Democratic leaders have to do to keep Snowe on board. In his brief afternoon remarks, Obama didn't mention the biggest flash point left to resolve as lawmakers try to combine all the different versions -- the public insurance option. Snowe voted against replacing the co-ops in the Finance bill with a public option, and she reiterated her opposition to such a plan Tuesday before she announced her support for the bill. There may be room to maneuver there; Snowe has said she might go for a public option rigged with some kind of "trigger," so it would take effect only if insurance rates didn't come down without it even after reform.

But the whole issue only shows that one headache, the lack of bipartisan support for the proposals, has been replaced with another in the form of more complicated negotiations to reach an endgame. Though every Democrat on the Finance Committee voted for the bill Tuesday, several said it needed a lot more work. "The insurance industry does not know how to stop itself," Sen. Jay Rockefeller, of West Virginia, said. "They are a train which gathers speed without impediments. What you have to do is put up an impediment. Not to stop them -- because nobody ever will do that -- but to slow them down." The public option, Rockefeller said, would be the brakes on the industry's runaway locomotive.

Of course, the industry may have helped Rockefeller make his case over the weekend, by issuing an easily debunked, bought-and-paid-for study that ignored the government subsidies the Finance bill would provide to help pay for insurance in order to argue that insurance rates would increase under the reform bill. With the study, America's Health Insurance Plans, the lobbying group for health insurers, broke pretty conclusively with the reforms the White House and Baucus had worked so hard all year to get them to support -- and then tried to insist nothing had changed. "While we agree with the objective of the current proposal, we are concerned about its workability and cost," AHIP president Karen Ignani said. That didn't fool many Democrats.

"It's extraordinary that in the final hours of this effort, as we come to a vote, that the industry remains right where it's remained all along," said Sen. John Kerry, D-Mass. "There is your argument right there ... and it's one we are going to make on the floor."

Suddenly, just as momentum is building in the legislative process for reform, insurers have presented themselves on a silver platter to Democrats in Congress and the White House who needed a bad guy to play against. The AHIP study came just a couple of weeks after one prominent insurer, Humana, was chastised by the federal government for sending propaganda about the reform plans to its members. All year, the natural political play -- bashing insurers for the broken status quo -- has been mostly off-limits to the administration, as Obama tried to keep the industry involved. Now the insurers may have alienated their former Democratic allies, right in the nick of time. There's still a lot of work left to do to keep the bill moving forward, yes. But from the looks of the healthcare debate now, Snowe may be right -- history could be calling.