Kids' movies that aren't for kids: The top 10

Will "Where the Wild Things Are" be a smash or a flop? Either way, it joins an august list of kidult classics 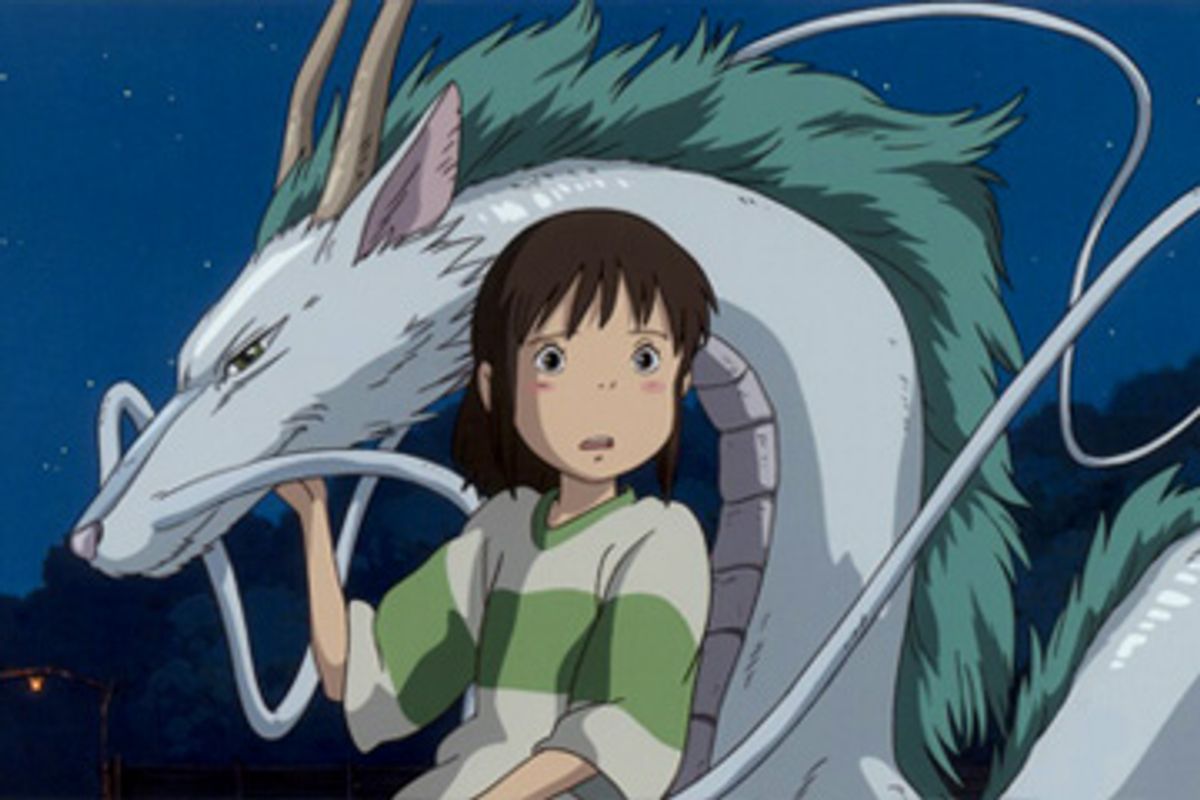 A still from "Spirited Away"
-- A still from "Spirited Away"

I haven't yet seen the Dave Eggers-Spike Jonze film adaptation of Maurice Sendak's "Where the Wild Things Are," which might be the most eagerly anticipated big movie of the fall season. But let's be honest about that anticipation: Part of it is an earnest desire to see Jonze's apparently gorgeous fantasy construction, and part of it is mystified wonder mixed with schadenfreude. How do you turn a beloved picture book for small children -- a book with almost no text, predicated on evoking an imaginative response -- into a Hollywood movie, the most literal-minded and imagination-supplanting of all art forms?

Now, first of all, Jonze and Eggers are the men for the job, and if anybody can pull off such an impossible project without eviscerating the Sendak spirit, it'd be them. (I'm grateful that Tim Burton didn't get his clawed, furry paws into this one.) But that doesn't vitiate the marketing questions that obsess industry-watchers: Who is "Where the Wild Things Are" meant for, and who will show up to see it?

I make no predictions about whether "Wild Things" is a smashola, an "Ishtar"-scale bomb or somewhere not quite satisfyingly in between. (OK, yes I do: I'll go with the smart money on Door No. 3.) But it isn't exactly a children's movie, definitely isn't a teenage movie and doesn't look anything like anybody's conception of a grown-up movie. I guess its core demographic is the winsome kidult crowd who cling to childhood memories of Sendak's classic with an almost tragic fondness -- and we'll have to see how large that audience is.

Whatever "Wild Things" does or does not do, artistically and commercially, it already belongs to a genre: Kids' Movies That Aren't Really for Kids. I mean, children's entertainment has included knowing winks at adult viewers as long as it's existed -- check out the jokes about marital life and Freudian psychology in Walt Disney's 1940s Donald Duck shorts, if you don't believe me -- but what we've seen in recent decades is a little different.

I'm talking about movies that either accidentally or deliberately embody a fundamentally adult understanding of the world, an ironic or tragic or frankly frightening picture of life that will either terrify the youngest viewers or sail right over their heads. Relying on suggestions from friends, perusal of other people's lists and my own experience as a parent and one-time child, here's a provisional top 10. We want more!

"Spirited Away" Now, I must admit that when I compiled a list of reader suggestions for the Awesome Kids Video Project (summer '08), Japanese animator Hayao Miyazaki's fable about a young girl's voyage into the land of the dead was an exceedingly popular entry. Maybe this movie, like most of Miyazaki's work, plays differently to child and adult audiences. The creepy-sad nuances -- like the recognition that one's parents do indeed die eventually, and journeys through haunted amusement parks won't bring them back -- pretty much evade younger viewers. That said, this movie thrums some deep, archetypal strings, and troubled me for days afterward. My kids love "Kiki's Delivery Service" and "My Neighbor Totoro," but I ain't going here.

"The Nightmare Before Christmas" Too obvious a choice? Maybe. Any parent who shows this movie to a little kid is asking for it -- it's got the word "nightmare" in the title! Of course, animator Henry Selick's breakthrough isn't meant as a kids' movie at all. It's the defining work of a semi-new kidult genre that combines grotesquerie with sweetness, a genre closely linked to the career of kidult pioneer Tim Burton (who produced and co-wrote this movie).

"Wall-E" I'm appending an asterisk here, and the footnote says that we're really talking about the entire Pixar catalog, with the exception of "Cars" and maybe "Toy Story." It's not that Pixar's flicks don't connect with the tot set, but especially as the company has aged its work has assumed an ever more ruminative and rueful tone. With this post-apocalyptic fable, loaded with sardonic asides about our consumer-excess society, followed by "Up" (which is something close to a tragic meditation on mortality), you'd have to say that Pixar has entered a new phase. These are fairy tales for grown-ups, and especially for parents, with just enough candy coating that kids will tolerate them.

"Coraline" Sure, Henry Selick gets another entry. This adaptation of Neil Gaiman's novella arguably isn't as scary as the book, but its sinister, sub-Freudian elements -- the evil alternate mom who wants to replace Coraline's eyes with buttons; the passage between worlds through a throbbing, glowing tunnel -- still seem to spring from somewhere way down deep.

"Charlie and the Chocolate Factory" (2005) and/or "Willy Wonka and the Chocolate Factory" (1971) Which one of these adaptations of Roald Dahl's classic is most completely demented, grotesque and inappropriate for children? Take your pick, really. It's interesting about Dahl -- there's a diabolical intelligence that's often close to cruelty in his books, but he understands childhood psychology so well, and plays favorites so shamelessly, that most of the time kids find his stories delightful-terrifying rather than simply terrifying. Something about the more detached, neutral perspective of a film -- or, anyway, of these two films -- makes Dahl's already gruesome fable of candy-capitalism seem downright sadistic.

"The Witches" Speaking of Roald Dahl, let's take one of his most malicious books, cast it with a pile of art-house-type actresses (Anjelica Huston, Brenda Blethyn, Mai Zetterling) and hand it over to Nicolas Roeg, director of "Don't Look Now" and "Performance"! Given all that, this story about a small boy (who's been turned into a mouse) trying to defang an immense witchly conspiracy wasn't really marketed as a kids' movie on its 1990 release. But who was it for, then? A classic in-between, neither-nor, which is ripe for rediscovery.

"The Dark Crystal" This Tolkienesque quest fantasy from 1982 was unleashed on lots of small children, pretty much on the basis that it had puppets and was co-directed by Muppet creator Jim Henson. Judging from my mailbox, many of those kids loved it, while others peed their Underoos in terror. Along with several other animated films of the same era -- most notably "The NeverEnding Story" and "The Secret of NIMH" -- "Dark Crystal" helped define the fantasy-oriented kidult demographic.

"Chitty Chitty Bang Bang" There's definitely an argument that this big-budget 1968 musical belongs on some other list -- misbegotten movies that aim at a mass market and don't wind up really working for anybody-- but I can't resist it. Ian Fleming's laborious children's book was entrusted to Roald Dahl (there he is again!) as screenwriter, and the end result runs 144 minutes. I say again: Children were asked to sit there in the dark for two and a half hours, alternately being bored by Dick Van Dyke's cheerful, pompous overacting and terrified by Robert Helpmann's leering, sadistic "Child Catcher."

"Gremlins" I know, I must be kidding, right? One of the greatest kids' movies of all time! Well, sure. But it's for kids who already relish the idea of destroying the humdrum world around them, but haven't yet discovered the musical and/or chemical subcultures of teenage life. And "Gremlins" is undeniably also for those of us who have outgrown such things -- who long to cram all the pots and pans in the microwave and turn it on, but are, alas, late for work. Small children, with their inherent desire for stability and order, have reportedly been reduced to shivering, trembling wrecks by this movie. No doubt it did them good.