The terrifying success of "Paranormal Activity"

How to turn a low-budget horror indie into a hit? Add Steven Spielberg, Twitter -- and scare the pants off people 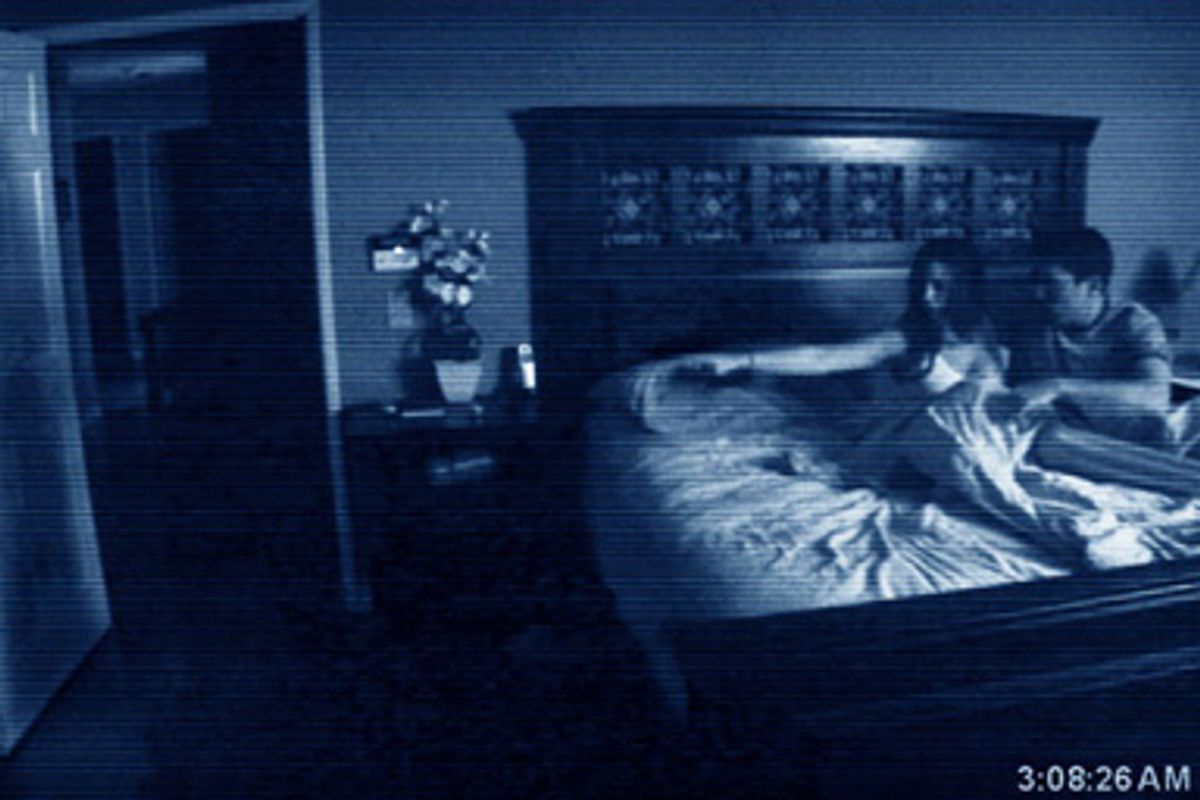 A still from "Paranormal Activity"
--

Taken merely as a tense, minimalist horror flick, "Paranormal Activity" would be fascinating. The low-budget, virtually bloodless little shocker with no major stars is being hailed as the scariest movie of the year -- and not without justification. But "Paranormal Activity" is also the story of how savvy marketing and carefully cultivated demand can turn a wannabe cult classic into a bona fide hit.

Last weekend, the movie, which director Oren Peli says cost $15,000 to make, earned almost $8 million in limited release, making it already one of the most profitable movies ever. In comparison, the wildly hyped "Jennifer's Body" did less than $7 million in its opening weekend -- and that was in wide release. The reviews, too, have been glowing. Though the New York Times dismissed it as only "half clever," Entertainment Weekly praised it as "freaky and terrifying," the Los Angeles Times called it "a psychological thriller of such small scale and yet such heightened effect that no doubt Hitchcock, wherever he may be, is smiling." And Roger Ebert called it "ingenious."

The plot is simple and familiar -- a young couple believes they're being haunted. The woman, Katie, has been tormented by a hostile unseen force her whole life; she's scared and wants to get rid of it. The man, Micah, thinks it's kind of cool. He buys an expensive video camera, the better to capture some spooky stuff -- and, by implication, eventually become the Susan Boyle of demonic episodes. The entire film unfolds via Micah's camcorder.

Sure enough, soon doors start squeaking and lights start flicking on and off. But the camera also captures Katie and Micah's increasingly tense dynamic, and as they argue over how to handle the activity, her fear and his stubbornness feed off -- and into -- the malevolent energy in their home. It all leads up to a climax that left the audience I watched with rooted to their seats even after the film ended, laughing nervously and exhaling deeply. As the lights came up, the man next to me shook his head and said, "Man, that was messed up."

That's a compliment, by the way. It's hard to praise a horror movie without inviting the inevitable criticism from viewers disappointed if they don't die of a fright-induced heart attack, and the film does at times beg the timeworn question -- why won't those nice dumb people at least Google "help for domestic demonic problems?" Nevertheless, it delivers satisfyingly gasp-out-loud scares.

"Paranormal Activity's" journey from camcorder quickie to Twitter-fueled sensation began four years ago. First-time writer-director Oren Peli brought his friends, actors Katie Featherstone and Micah Sloat, to his own home to make the kind of horror movie he'd always liked -- restrained, with a psychological bent. When Salon spoke to Peli earlier this week, he explained, "I respond to movies that don't show you everything right away -- I love 'Rosemary's Baby' and 'The Sixth Sense.' The first movie that freaked me out was 'The Exorcist.' That had a huge impact." The horror classic's cloven hoof prints are all over Peli's film, notably in the way it employs a demon with its sights on the heroine and the contentious use of a Ouija board. More significantly, and frighteningly, much of the action takes place in the place we feel most safe and vulnerable -- in the bedroom, in the dark. "Micah believes he can outsmart it," explains Peli. "You think you have access to all this technology, you can do anything. But it doesn't matter. In the end, this ancient, primal thing is stronger."

To give the movie a shot of authenticity, Peli opted for guerrilla filmmaking tactics. "We shot for a week," he says. "The basic outline was there, but the actors never knew what scene they would be doing or what would happen. I wanted a feeling of claustrophobia."

Peli's methods -- the documentary style, using the actors' real names, shooting mostly in sequence, the heavy emphasis on improvisation -- are familiar to anyone who followed "The Blair Witch Project" phenomenon 10 years ago, and that's no accident. "'The Blair Witch Project' and 'Open Water' were the movies that gave me the confidence to think I could do this," explains Peli.

But the comparisons don't end there. Like "Blair Witch," "Paranormal Activity" owes much of its life to the Web.

The lore goes that after languishing for two years, the movie was picked up by Paramount with the intention of turning it into a lavish remake. (Neill Blomkamp's "District 9" had a similar origin, beginning its life as an indie short.)

But then the film, in all its rough-around-the-edges glory, started winning fans in high places. And when Steven Spielberg himself, who made his first splash with the low-budget horror movie "Duel," intervened, the remake was scrapped. Eventually the only thing changed was a new version of the ending, though even that retains most of Peli's original vision of the characters' fates.

"When we first tested it, people dug the ending, but they were expecting something bigger," Peli explains. "The ending was suggested by Spielberg. I've always kept in touch with Micah and Katie, so we just brought them back and shot it."

Once the movie was completed, Paramount did something unusual. With no fancy CGI or "Access Hollywood"-ready big names to help promote it, it let the audience do the work. Peli says, "The Paramount people were very smart. They knew not to market this in a traditional way. And the fans really embraced it."

First, the movie rolled out at carefully targeted college screenings, which only made people in places the movie wasn't being shown -- places like New York -- eager to get in on the action. Paramount then aggressively stoked the buzz on Facebook and pushed to make the movie a hot Twitter trend. Most ingeniously of all, the studio created a "demand it" campaign on Eventful.com, promising to give the movie a wide release if it got a million demands. Last Friday, as if on cue, it reached its goal, and the movie opens wide Friday.

Whether the demand campaign was a clever ruse to build anticipation or a legitimate zeitgeist or a little of both doesn't really matter. Like "Paranormal Activity" itself, the campaign feels authentic. Audiences like an underdog. We like to feel connection. And it takes about 10 minutes on Facebook to figure out we really love voting for stuff.

Though the success of the movie relies heavily on its grass-roots-esque campaign, all the scrappy, can-do hype in the world doesn't mean anything if audiences don't connect with the story itself. It sounds easy to do a horror movie that riffs on the YouTube and "Ghost Hunters" generation, to have a studio tap into social networking culture. But tell that to "Jennifer's Body." Or "Pandorum." Or "Sorority Row."

But if a movie can reach over in the dark and stir our primal fear, that's an accomplishment. With just a shadow across a door, a sudden thump, or the image of a woman standing stock still in front of her bed in the middle of the night, "Paranormal Activity" manages to be chilling and deeply unnerving. Like "Night of the Living Dead," "The Texas Chainsaw Massacre," "Repulsion" and "Halloween," its urgent, lo-fi aesthetic only enhances its creepy realism. It's a hit for the most surprising reason of all: because it's very good.