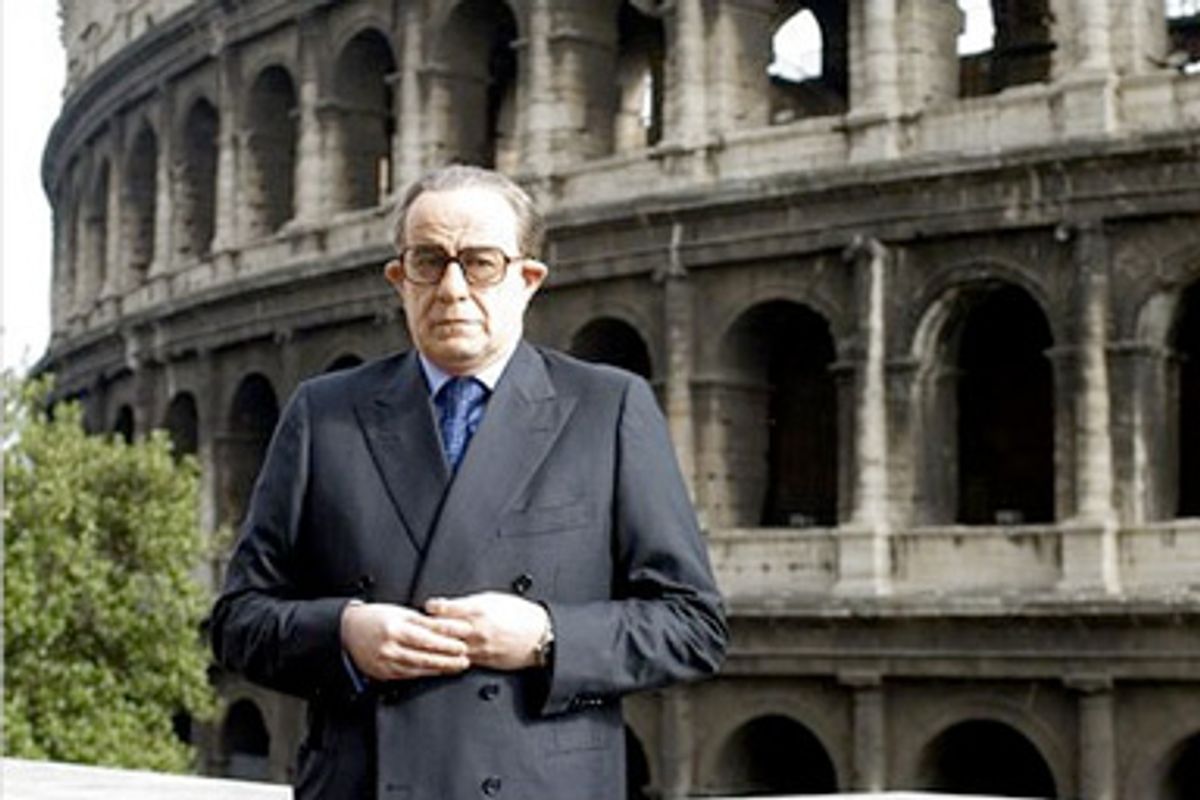 Why am I telling you absolutely, positively not to miss a movie about the incomprehensible realm of Italian politics, one that had a blink-and-you-missed-it theatrical release earlier this year? Because writer-director Paolo Sorrentino's "Il Divo" (winner of the Jury Prize at Cannes last year) knocked my socks off, that's why. It's one of the only films I've seen all year -- along with another hard-to-explain foreign docudrama, Nicolas Winding Refn's "Bronson" -- that's exciting to watch all the way through and feels like a cinematic and technical breakthrough.

To tell the story of Giulio Andreotti, the sphinxlike, hunchbacked seven-time prime minister who dominated Rome's political scene for more than 30 years (played by Toni Servillo with creepy, mesmerizing grace), Sorrentino breaks every rule in the biopic book, before shoving the book into a burning Maserati and rolling it off a cliff. His subtitle is "La spettacolare vita di Giulio Andreotti," and I don't think you need an Italian dictionary to understand that adjective. Most obviously, "Il Divo" brings some of the cinematic showmanship of Coppola and Scorsese back to their ancestral homeland: This is an explosive action movie about a sedentary politician, a libidinally charged movie about a sexless, toadlike man, and a dark, symbolic thriller about the purportedly dry world of political machinations.

Don't know much of anything about Andreotti or Italy, and don't especially care? I assure you that doesn't matter. This is a movie about the mysteries of power; it could be about a pope or a prince or a president, and you don't have to grasp every nuance or every topical reference. Sorrentino supplies enough context for his daring onslaught of Freud-by-way-of-Fellini-by-way-of-David Fincher set pieces to make sense -- and, anyway, the point of "Il Divo" is that very little about Andreotti's career or 20th-century Italy makes sense.

Nearly every shot in this vibrant, overcrowded film is a gamble; nearly every soundtrack choice is puzzling, chilling and thrilling; nearly every scene is charged with dark hilarity, stylized and stretched to the breaking point. Through it all shuffles Servillo, playing the pious little gnome plagued with chronic headaches who proved so difficult for reformers and socialists to vanquish. Was Andreotti, as many Italian leftists believe, the frontman for a secret neofascist-Vatican-Mafia cabal that stood behind his Christian Democratic Party? Or was he as he presented himself, a modest, shrewd and pragmatic survivor whose rivals and enemies (be they journalists, bankers, communists or generals) kept, coincidentally, turning up dead?

Sorrentino's breathtaking, profoundly agnostic film never tries to offer Oliver Stone-grade certainties. As presented here, political power is a malleable and mysterious thing, closer to questions of philosophy or metaphysics than to moral absolutes about truth and lies, honesty and corruption. If anything, "Il Divo" suggests that the "Prince of Darkness" himself (still alive at 90, and serving in the Italian senate) cannot answer the most troubling questions about his life and career. In a lifetime of cryptic utterances, this Andreotti quote, used in the film, may be the ultimate: "If you really want to keep a secret, you must not confide even in yourself."