Maybe Obama can turn on a dime from healthcare to jobs, but if not, there will be trouble 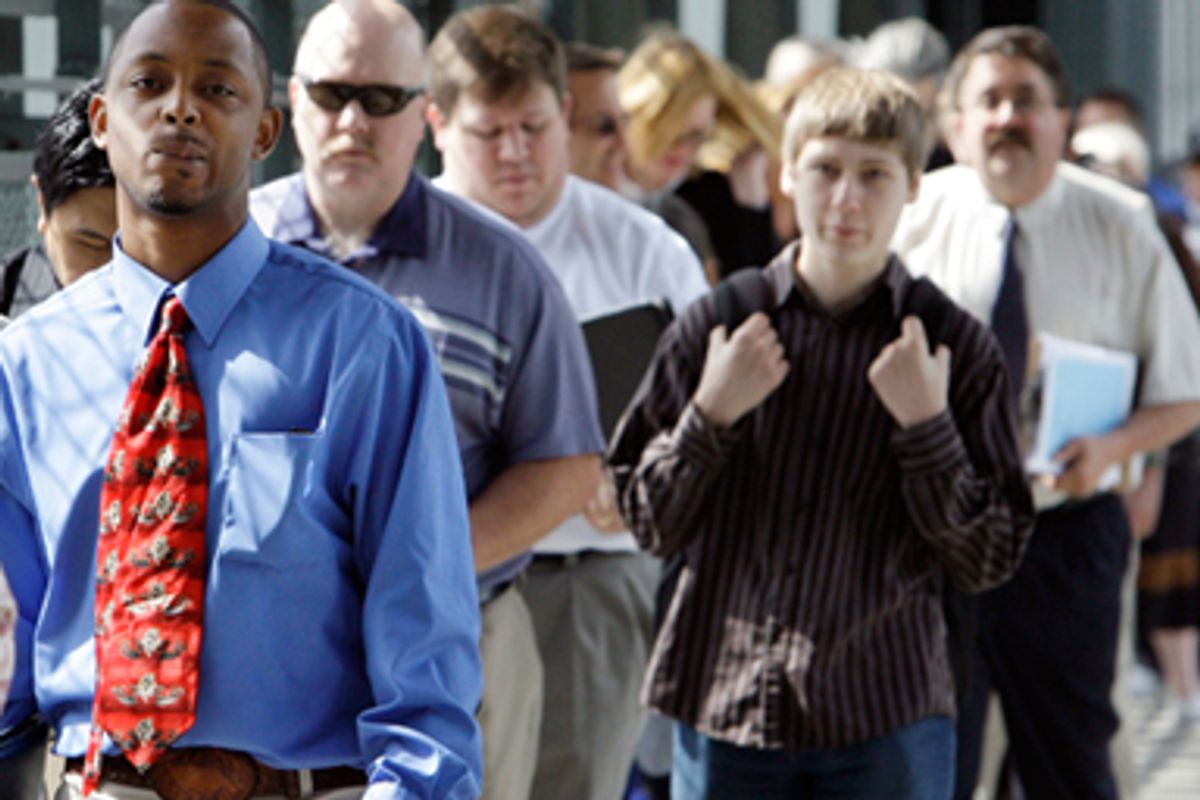 People wait in line to enter a job fair in Seattle on June 16.
--

Presidents tend to overcompensate for the errors of their predecessors in the same party and in so doing sow seeds of their own mistakes. Bill Clinton wanted above all to avoid Jimmy Carter's fate -- losing reelection because the economy was heading south on Election Day. So Clinton made a deal with Alan Greenspan to slash the budget deficit and thereby jettison much of his ambitious campaign agenda (that was Greenspan's precondition for lowering interest rates and causing an economic boom in time for the reelection) and then Clinton took direction from Dick Morris, who told him to move to the right. The result: Clinton avoided Carter's failure and won reelection handily. But the Clinton years produced few if any major social reforms. Clinton spent so much of his initial political capital, as well as his time and energy, on deficit reduction that he didn't have enough left to enact healthcare in 1994.

Barack Obama came to the White House intent on not repeating Clinton's failure to enact universal healthcare. Did he overlearn the Clinton lesson? Obama seems to have made all the right moves to enact something he can credibly label healthcare reform: Rather than spend his political capital elsewhere, he reserved most of it for healthcare.

I sincerely hope America gets genuine health reform and I hope it's stronger than what's emerging in the Senate. (Whoever voted for Joe Lieberman last time around ought to pray for continued good health.) I worry, though, that Obama's strategy may turn out to be a mistake comparable to Clinton's overemphasis on deficit reduction. Obama's focus on healthcare rather than jobs, when the economy is still so fragile and unemployment moving toward double digits, could make it appear that the administration has its priorities confused. While affordable healthcare is critically important to Americans, making a living is more urgent. Yet the administration's efforts to date on this more basic concern have been neither particularly visible nor coherent.

The current rate of unemployment would have been even higher were it not for the federal stimulus package, but the stimulus should have been much larger. Especially with the states still cutting back on spending and raising taxes, the federal stimulus will be barely enough to keep unemployment from hitting 11 percent by the middle of 2010. Yet as the rate of unemployment continued to rise faster and higher than the White House anticipated, Obama could not return to Congress to seek a larger stimulus. He was spending political capital on healthcare.

The Wall Street bailout, meanwhile, has saved Wall Street but left most regional banks in deep distress. Almost nothing has trickled down. Small businesses still can't get loans. Foreclosures continue to mount largely because jobs continue to vanish and homeowners can't pay their mortgages. Yet at this point, on the eve of a healthcare bill, it would be difficult for Obama to return to Congress seeking billions more to aid distressed homeowners and small businesses.

While healthcare reform, if done right, can help American families stay afloat in the economy, the current bills won't offer most Americans any appreciable decline in the cost of their health insurance nor clear improvement in the efficiency or quality of the healthcare they receive, and those who will benefit won't see the benefits until 2014 at the earliest. All this is partly a result of Obama's sharpest break from Clinton -- whose ambitious healthcare plan drew immediate fire from Big Pharma, the American Medical Association, and health insurers: The Obama White House bought off the medical-industrial complex by promising it fatter profits, bolstered by tens of millions of new paying customers.

That and other deals cut with industry -- including promises to Big Pharma that Medicare wouldn't use its bargaining clout to reduce drug prices, to the AMA that doctors wouldn't have to face larger cuts in Medicare reimbursement rates, and to private insurers that the White House wouldn't fight hard for a public insurance option -- are likely to make the resulting reform far more costly than it would be otherwise. These extra costs will be borne by those Americans who will be required to buy insurance but won't qualify for federal assistance, along with Medicare beneficiaries who will be paying more and receiving less. These people may not know they're indirectly paying the costs of buying off these industries, but they'll know they're getting shafted (Republicans will be sure to make them aware, even though the GOP has a much longer record of shafting the middle class for the benefit of big business).

The optimist in me says Obama can pivot off a healthcare victory and launch some new initiatives that palpably and quickly spur job growth. The realist says there aren't any such initiatives -- at least none that can work fast enough to reverse the tide of unemployment before the midterm elections. Fiddles such as a new jobs tax credit can help but they won't make much of a dent. Even with a larger stimulus, a jobs recovery would still be far off. The tangible benefits of healthcare reform are likely to be so elusive in the meantime that the public may become easy prey for demagogues on the right who blame Democrats for the economic insecurities that bedevil the nation next November.

If Obama and the Democrats lose one or both houses of Congress in the midterms, it will be because the president learned only the most superficial lesson of the Clinton years. Healthcare reform is critically important. But when one out of six Americans is unemployed or underemployed, getting the nation back to work is more so.