The sleazy advocacy of a leading "liberal hawk"

Peter Galbraith's vast, undisclosed financial interests in the policies he spent years advocating as an "expert." 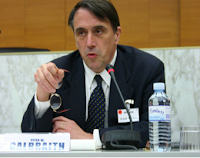 The New York Times today details the unbelievably sleazy story of Peter Galbraith, one of the Democratic Party's leading so-called "liberal hawks" and a generally revered Wise Man of America's Foreign Policy Community.  He was Ambassador to Croatia under the Clinton administration in the mid-1990s and, in March, 2009, the Obama administration (specifically, Richard Holbrooke, Galbraith's mentor) successfully pressured the U.N. to name Galbraith as the second-in-command in Afghanistan.  The NYT does a good job today of adding some important details to the story, but it was actually uncovered by Norwegian investigative journalists and reported at length a month ago in pieces such as this one by Helena Cobban.  In essence, this highly Serious man has corruptly concealed vast financial stakes in the very policies and positions he has spent years advocating while pretending to be an independent expert.

Galbraith was one of the most vocal Democratic supporters of the attack on Iraq, having signed a March 19, 2003 public letter (.pdf) -- along with the standard cast of neocon war-lovers such as Bill Kristol, Max Boot, Danielle Pletka, and Robert Kagan -- stating that "we all join in supporting the military intervention in Iraq" and "it is now time to act to remove Saddam Hussein and his regime from power."  As intended, that letter was then praised by outlets such as The Washington Post Editorial Page, gushing that "it is both significant and encouraging that a bipartisan group of influential foreign policy thinkers, veterans of both Democratic and Republican administrations, has signed on to a statement of policy on Iraq that makes sense on the war."  Throughout 2002 and 2003, Galbraith appeared in numerous outlets -- including repeatedly on Fox News and with Bill O'Reilly -- presenting himself as a loyal Democrat firmly behind the invasion of Iraq.  In 2002, he was an adviser to Paul Wolfowitz on Kurdistan.

After playing a key role in enabling the invasion of Iraq, Galbraith first became one of a handful of U.S. officials who worked on writing the Iraqi Constitution, and after he resigned from the government, he then continuously posed as an independent expert on the region and, specifically, an "unpaid" adviser to the Kurds on the Constitution.  Galbraith was an ardent and vocal advocate for Kurdish autonomy, arguing tirelessly in numerous venues for such proposals -- including in multiple Op-Eds for The New York Times -- and insisting that Kurds must have the right to control oil resources located in Northern Iraq.  Throughout the years of writing those Op-Eds, he was identified as nothing more than "a former United States ambassador to Croatia," except in one 2007 Op-Ed which vaguely stated that he "is a principal in a company that does consulting in Iraq and elsewhere."  When he participated in a New York Times forum in October, 2008 -- regarding what the next President should be required to answer -- he unsurprisingly posed questions that advocated for regional autonomy for Iraqis generally and Kurds specifically, and he was identified as nothing more than the author of a book about the region.

What Galbraith kept completely concealed all these years was that a company he formed in 2004 came to acquire a large stake in a Kurdish oil field whereby, as the NYT put it, he "stands to earn perhaps a hundred million or more dollars."  In other words, he had a direct -- and vast -- financial stake in the very policies which he was publicly advocating in The New York Times, The Washington Post, and countless other American media outlets, where he was presented as an independent expert on the region.  As Cobban wrote:

For the preceding four years, while Galbraith was an influential participant in Iraq-related constitutional and political discussions, he also had an undisclosed financial interest in a KRG-authorised oil development venture. . . .

Here in the U.S., Galbraith has long been associated with the "liberal hawk" wing of the Democratic Party . . . Many members of this group have been liberal idealists - though some of those who, on "liberal" grounds, gave early support to Pres. George W. Bush's decision to invade Iraq later expressed their regret for adopting that position.

Galbraith has never expressed any such regrets, and last November, he was openly scornful of Bush's late-term agreement to withdraw from Iraq completely. The revelation that for many years Galbraith had a quite undisclosed financial interest in the political breakup of Iraq may now further reduce the clout, and the ranks, of the remaining liberal hawks.

Unfortunately, that last sentence is likely wishful thinking.  What Galbraith has done, as sleazy and dishonest as it is, is simply par for the course in accountability-free Washington.

Galbraith's relationship with the Kurds goes back many years.  He undoubtedly knew that overthrowing Saddam would empower his Kurdish friends and their ability to dole out oil contracts.  Indeed, in his own 2006 book, he recounts that he began working on Kurdish autonomy and independence "two weeks after the fall of Saddam Hussein."  Less than a year later, having helped convince the public -- and many Democrats -- to invade Iraq, he formed a company that then acquired a huge stake in Kurdish oil.  And he then spent years running around trying to use his status as Foreign Policy Community expert to exploit the war he cheered on for his own massive personal gain, while keeping completely concealed those glaring conflicts of interests.

Reider Visser, a historian of southern Iraq, told The Boston Globe last month:  "Galbraith has been such a central person to the shaping of the Iraqi Constitution, far more than I think most Americans realize. All those beautiful ideas about principles of federalism and local communities having control are really cast in a different light when the community has an oil field in its midst and Mr. Galbraith has a financial stake."  So here's a leading advocate of the war on Iraq who used his influence in the U.S. Government and the Foreign Policy Community -- as well as the break-up of Saddam's regime -- to enrich himself on Iraqi oil.  As the NYT put it:

As the scope of Mr. Galbraith’s financial interests in Kurdistan become clear, they have the potential to inflame some of Iraqis’ deepest fears, including conspiracy theories that the true reason for the American invasion of their country was to take its oil. It may not help that outside Kurdistan, Mr. Galbraith’s influential view that Iraq should be broken up along ethnic lines is considered offensive to many Iraqis’ nationalism. Mr. Biden and Mr. Kerry, who have been influenced by Mr. Galbraith’s thinking but do not advocate such a partitioning of the country, were not aware of Mr. Galbraith’s oil dealings in Iraq, aides to both politicians say.

Some officials say that his financial ties could raise serious questions about the integrity of the constitutional negotiations themselves. "The idea that an oil company was participating in the drafting of the Iraqi Constitution leaves me speechless," said Feisal Amin al-Istrabadi, a principal drafter of the law that governed Iraq after the United States ceded control to an Iraqi government on June 28, 2004.

In effect, he said, the company "has a representative in the room, drafting."

Remember how all those freakish and paranoid people -- on the crazed "Arab street" and in American-hating leftist circles -- actually believed in "conspiracy" theories such as the wacky notion that one of the motives for invading Iraq was a desire to exploit its oil resources?

Here we have yet another example of one of America's most Serious and respected "experts" advocating various policies while maintaining huge, undisclosed financial and personal interests in his advocacy.  He was given access to every major media outlet virtually on demand to do so -- the NYT, The Washington Post, NPR, CNN, Fox -- all while those interests remained concealed.  His uniting with the country's most extreme neocons to support the Bush administration's attack on Iraq didn't prevent the Obama administration from pushing him to be hired as the U.N.'s number two official in Afghanistan.  He continued to be revered by leading establishment Democrats as an important and respected expert.  In other words, Peter Galbraith is a perfect face showing how America's Foreign Policy Community and our political debates function.

UPDATE:  Jonathan Schwarz recalls what was done to those who suggested that part of the motive in invading Iraq might have something to do with that country's oil reserves.

UPDATE II:  The New York Times is forced to publish an Editor's Note today in light of this story, noting that "Mr. Galbraith signed a contract that obligated him to disclose his financial interests in the subjects of his articles"; he "should have disclosed to readers that Mr. Galbraith could benefit financially" from the policies he was advocating in his Op-Eds; and "had editors been aware of Mr. Galbraith's financial stake, the Op-Ed page would have insisted on disclosure or not published his articles."