How the GOP got its groove back

Republicans look ahead to 2010, without bothering to figure out whether they've solved their problems first 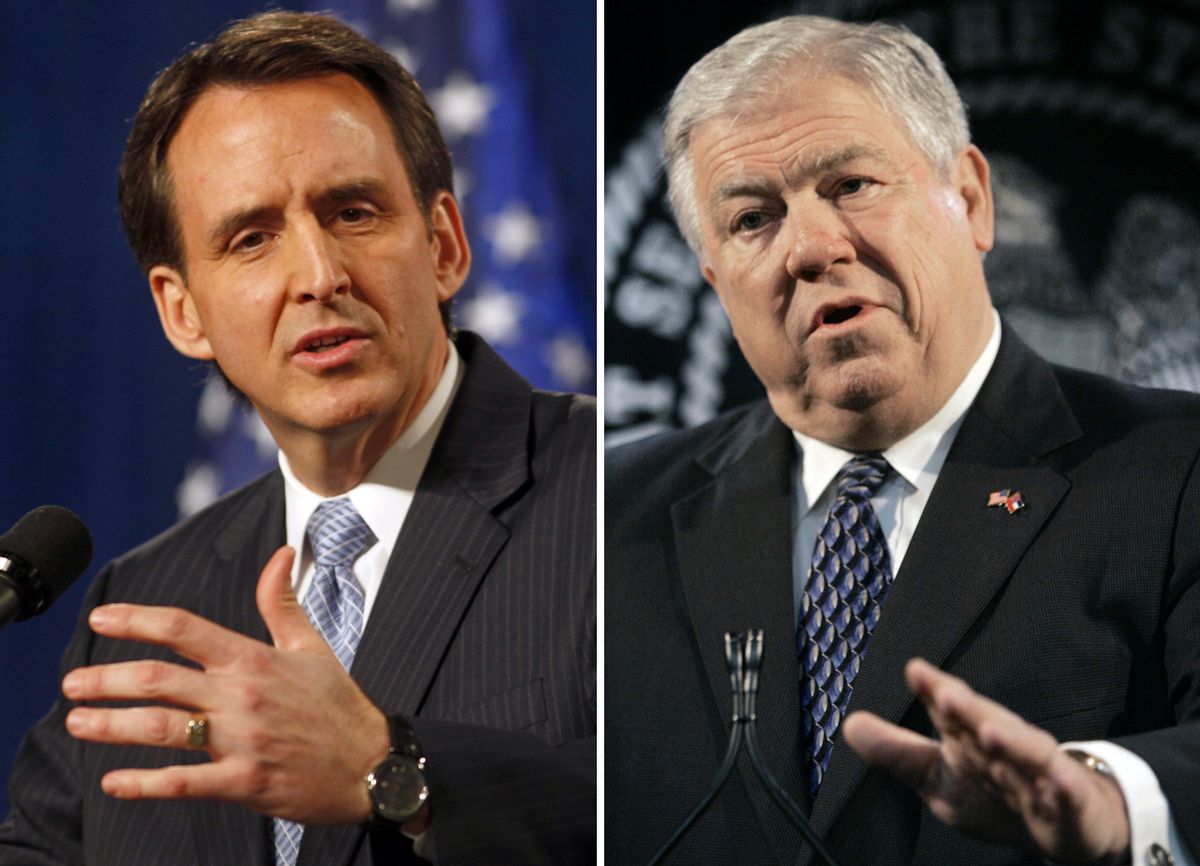 Finding the epicenter of the looming Republican comeback is pretty easy, at least this week. As it happens, you can drive there from Austin-Bergstrom International Airport in less than 30 minutes, and with only two turns. Once you get to the massive golf and spa complex with signs warning pedestrians and bicyclists to stay off the road, you're in the right place.

Win a couple of odd-year gubernatorial contests, it turns out, and the future suddenly looks a lot brighter. Bright enough, in fact, that the RGA had no problem Thursday morning showing attendees a "Saturday Night Live" clip spoofing Fox News Channel's coverage of the 2009 elections. The point of the skit was that the GOP and its friends at Fox were delusional, giddily declaring the 2008 elections overturned on the basis of two statewide elections with low turnout -- which the speakers at the RGA conference then proceeded to come close to doing themselves. It wasn't clear how intentional the irony was.

That was, in essence, the message of the RGA conference: So what if the only thing voters like less than the Democrats in Congress might be the Republicans in Congress? Who cares if the GOP has been reduced to a rump minority in the House and Senate, left on the sidelines with not much more to do than root for Democrats to fight among themselves? In politics, what matters is momentum, and right now, Republicans -- and quite a few Democrats, especially in private -- think they have it.

So Bob McDonnell and Chris Christie, the winners in Virginia and New Jersey a few weeks ago, were hailed as the heralds of a new GOP majority -- a majority of governors, granted, which doesn't really mean anything in terms of being able to pass legislation or implement policy on a national scale, but a majority nonetheless. (Both winning candidates demurred when asked whether Obama fatigue had helped them to the statehouse; it was local issues that won the day, they insisted.) No one mentioned that the party in the White House almost always loses the New Jersey and Virginia elections the year after a presidential race.

And Barbour came armed with a new poll by Zogby International that showed Obama's approval ratings and reelection numbers were perilously low in states with competitive gubernatorial races on tap for next year. Hawaii Gov. Linda Lingle said there was no reason the GOP shouldn't aim to win every single state. "There's no state that we can't win," she said. "Talking to a Republican from Hawaii -- the first Republican elected in 40 years -- I'm telling you, we could win in every state."

But the most telling numbers may have been the ones Barbour touted a little later, in a press conference, after he'd shared them with governors and Republican loyalists Thursday morning. Forget the polling; what really got the RGA excited was another kind of stat. "We spent $23 million in 2006," Barbour said. "We're going to start 2010 with $25 million in the bank."

Raising and spending money is, after all, the main thing a group like the RGA does. Which is why the big "Victory Barbecue" on Wednesday night was sponsored by the Corrections Corporation of America, whose Web site proclaims it's "the private corrections management provider of choice for federal, state and local agencies." And why Indiana Gov. Mitch Daniels apologized to "the vendors in the room" for boasting of his love of bidding state contracts out using reverse auctions. Everywhere you looked, corporate sponsors popped up. A mining company, an information technology company and a supply chain logistics company teamed up with CCA and the liquor lobby to sponsor a bash at Cindy's Gone Hog Wild, a bar down the road from the conference resort. A "trunk show and fashion boutique" was set up in one hallway Thursday afternoon, so attendees could take a break from hearing about the Obama administration's nefarious healthcare reform plans to get a little shopping in. (The governors, meanwhile, headed out for some skeet and trap shooting on the resort's grounds.)

That's not to say Democrats will have it easy next year, especially if the economy doesn't recover faster. Incumbents in either party are likely to struggle; fairly heavy losses in the House and Senate are probably on the horizon, though Democrats took so many seats in 2006 and 2008 that their majority in both houses is likely safe. Midterm elections almost never bring good news for new presidents, just like the New Jersey and Virginia results.

But the GOP crowing in Texas this week doesn't mean Republicans have it all figured out again, either. The candidates on the Republican line in major races next year may include Ohio's John Kasich, who was the House Budget Committee chairman after the 1994 elections; New York's Rick Lazio, who tried, and failed, to beat Hillary Clinton for the Senate in 2000; and Iowa's Terry Branstad, whom you may have heard of because he already served as governor of the state from 1983 to 1999. That lineup doesn't exactly scream out "new and improved," no matter how much Barbour talked up the GOP comeback.

By contrast, Barbour boasted Wednesday that Republicans in New Jersey voted for a moderate, Christie, and in Virginia, they voted for a conservative, McDonnell. The main thing they had in common was their party label. As GOP governors gathered to bash the healthcare reform bill Thursday morning, they ran through the same litany of Republican "solutions" to the problem that their comrades in Washington have offered for months -- tort reform, insurance portability, tax credits. Their most famous ex-governor, meanwhile, was running around on a book tour, talking mostly to tea party types who won't exactly help win swing voters over. Minnesota Gov. Tim Pawlenty, who's supposed to be a rising star in the party and is planning a run for president in 2012, stuck to bland pronouncements as he moderated a domestic policy panel on Wednesday. "Citizens are being asked to live on the same amount of money, or less, than they did last year," he said. "They think it's reasonable that government should tighten its belt as well." No one at the conference could open his or her mouth without declaring the states to be "the laboratories of democracy" -- Louisiana Gov. Bobby Jindal must have said at least a half-dozen times that unlike Washington, states can't print their own money. It was not, all in all, a rousing display.

What next year's elections may offer increasingly alienated voters, then, could be a choice between the Democrats, complete with their infighting and chaotic majorities -- who may not have done enough yet to fix the problems that they confronted upon walking into office -- and the Republicans -- who were the ones who helped mess things up in the first place. If the RGA gathering was any evidence, though, the GOP is aiming to win that choice by default. A win, after all, is still a win.