Have yourself a very merry black Friday 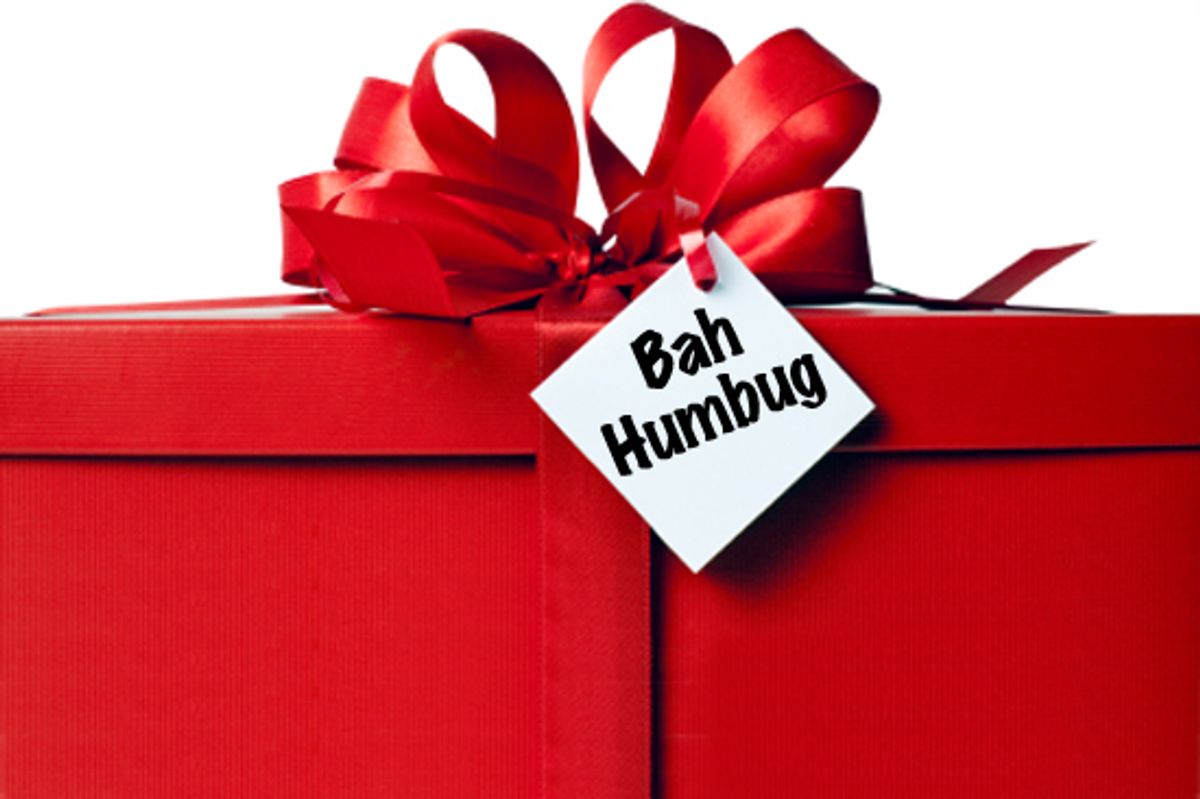 Do not take the misanthropic title of "Scroogenomics" at face value. Consider that the subtitle, "Why You Shouldn't Buy Presents for the Holidays," doesn't apply to the beloveds on your "nice" list. And for God's sake, pay no attention to the child sobbing atop a red-wrapped package on the book's cover. Author Joel Waldfogel doesn't want to harsh on your holidays. In fact, he wants to make them better.

In his sane, reasonable and conveniently stocking stuffer-size new book, the Wharton School economist elaborates on what those of us on a first-name basis with the folks at the return desk already know -- that the glut of holiday overspending is a drain on both the wallet and the ho ho ho spirit. But the book is no polemic; it's a study in retail trends, spending and debt habits, and a simple call for a better use of our money than Itty Bitty Book Lights for people we barely know.

Full disclosure: My favorite phrase is, "Did you keep the receipt?" I have a small holiday budget, and I don't use my credit card for presents. Years ago I instituted a strict limit for the grandparents on gifts for my daughters. And frankly, I'm usually a whole lot less stressed for all of it.

So when Waldfogel tosses around unfestive phrases like "high yield" and "inefficient giving," I'm already on board. Nothing truly deflates the holiday spirit like being in the red all January long.

I spoke to Waldfogel via phone last week to discuss recessionary retail mayhem, the department store table of crap, and how to make the shopping season a little happier.

You talk in the book about the concept of "deadweight loss" and how it applies to holiday spending. Can you explain that?

A deadweight is a loss to one party that's not a gain to someone else. Normally if I spend $50 on myself it's for something worth at least $50 to me. If I spend $50 on you, and I don't know what you like or already have, I could buy something that's worth nothing for you. That's a loss. The average difference in gift satisfaction between the giver and recipient is about 20 percent.

But we're a consumer culture. We generally like to shop. Why, then, do the holidays go so wrong?

Normal spending, when we're buying for ourselves, provides a measure of satisfaction. The problem with gift giving is that's not what is going on. Usually in shopping there are two parties. There are buyers and sellers. The seller gets a price that's bigger than the cost he bought it for, and the buyer gets an item he values above the price. That generates profit and satisfaction.

The thing about gift giving is the seller still gets a profit, but on the consumer side the recipient does not get the same amount of satisfaction.

There's this idea that any gesture is better than no gesture at all, even if it's from the table of useless golf alarm clocks. You call it being socialized "to perpetuate the wastefulness."

My issue is with spending where something is missing -- some satisfaction we could have had if we'd done it differently. You shouldn't try to pick these symbolic tokens for someone that have no meaning.

Women do 80 percent of the holiday shopping. Look at the time we'd get back if we shopped differently.

What do you do for all those people on your list then? You talk a lot in the book about gift cards, which I love, and which you point out now represent a third of all holiday spending. Whenever I get one, I either spend a little more to make sure it's all used up, or put it toward a big-ticket item I would feel guilty about buying otherwise. So it's actually a win for retailers, too.

Gift cards are great. They're like money laundering -- it's like cash without giving cash. Cards let people choose what they want so it's not a waste. But it's no good if the user doesn't redeem it. I'd love to see these gift cards default to a charity after an expiration date. Buyers who were socially conscious could really make something out of it.

Which brings us to your second suggestion -- giving to charity. That's a tough one to put under the tree.

If you look at spending data, charity is a luxury. It shows up on the lists of these things people would like to do if they had more money. So if you want to give someone an experience of luxury, one where there's no value destruction, make a donation in their name. Even kids are pretty enthusiastic about charity.

But kids still want something they can open.

I'm not at all against the kind of giving that's organic. Of course you should give to children. I think people should go on giving to the people they know well. Sometimes givers find transcendent, wondrous things. It's the obligatory I'm opposed to. But the last thing I want anybody to see is the crying kid on the cover of the book.