The preposterous showman brings his holiday book, and waterworks, to the stage and screen. Lights! Camera! Jesus! 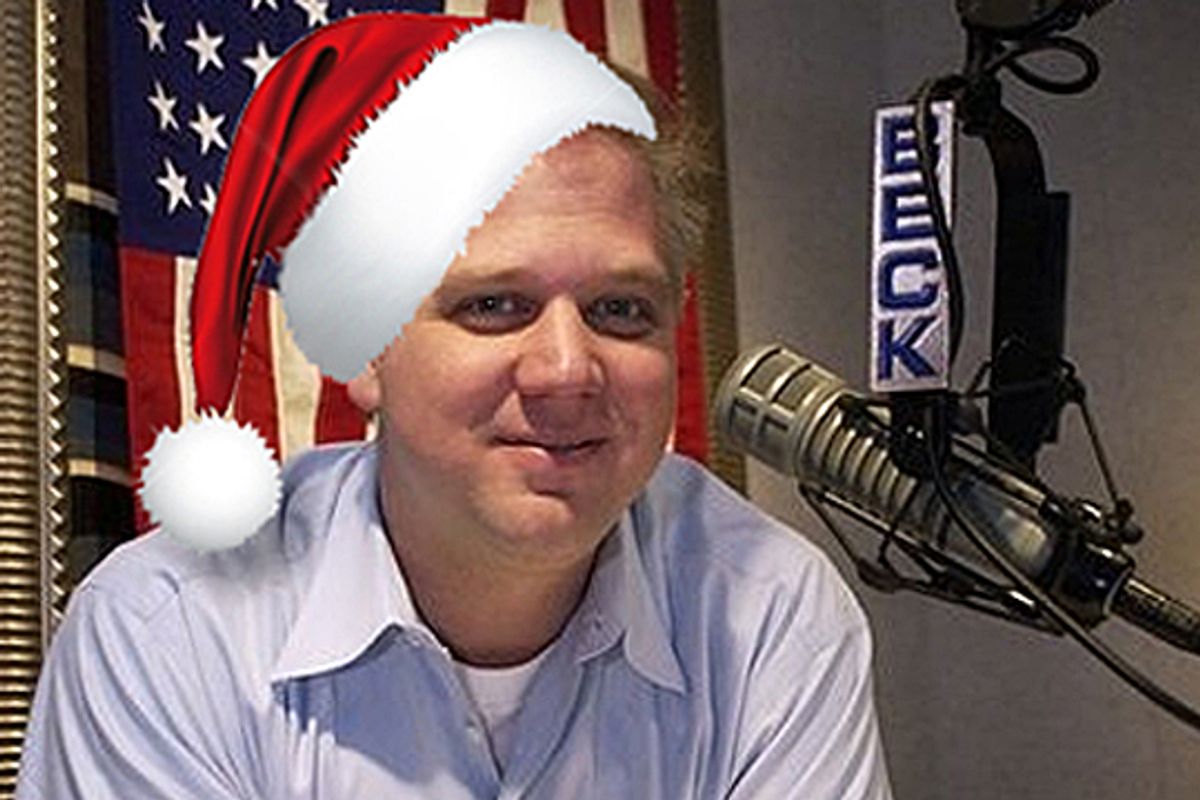 There is, it turns out, something far more terrifying than Glenn Beck, political philosopher. On Thursday night, the world met Glenn Beck, empathetic life coach.

Beck took the night off from his venom-laden, paranoid Fox News Channel talk show Thursday, and instead broadcast, to movie theaters around the country, his 2009 Christmas special. Like last year's show, it was based on his heavy-handed, vaguely autobiographical 2007 novel, "The Christmas Sweater."

Actually, that's not quite accurate; most of Thursday's show consisted of Beck airing a rerun of last year's special, in which he took his already mawkish novel, ratcheted up the melodrama and turned it into a one-man stage show featuring, well, Beck. The new addition this year came only after the tape rolled, when Beck -- now live, not recorded -- brought out four people whose lives had been touched by his work and chatted briefly with them about what it's like to overcome adversity. One guy was apparently on his way to the drug store to buy an overdose of sleeping pills to kill himself but changed his mind when he heard Beck on the radio and found the strength to keep going on.

Anyone who had just sat through the "Christmas Sweater" show, though, might have identified better with the man's original impulse. But in the theater where I watched the program, on the top floor of a high-end shopping mall near the D.C.-Maryland border, there weren't that many viewers to see it all go down. Beck simulcast his little pageant from a packed house in lower Manhattan, but 15 minutes before showtime in D.C., there were only 10 people in the audience with me. The crowd didn't grow much by the end of the night, either. The theater told me they sold fewer than 30 tickets, at $20 a pop. (That turned out to be the rule rather than the exception, according to anecdotal reports of small crowds all over.)

The show got started with some weird, spacey music, as if Beck was trying to prepare his audience for an alien invasion. Then the host took the stage (accompanied by a mostly black choir singing Christmas carols). Signs for Napa Auto Parts, the program's sponsor, hung incongruously in the wings, visible whenever the camera shot Beck from the side. "Two years ago, I wrote a book called 'The Christmas Sweater' because I knew that a storm was coming," he said. What inspired him to write the novel was a memory of his own storm. One Christmas, back before he became a Mormon and got sober, Beck found himself drunk, depressed and too broke to shop for his kids' presents anywhere but at CVS. "I felt like a loser," he said, tears welling up in his eyes.

Those tears would turn out to be the leitmotif of the night, especially once the replay of last year's show got going. Acting, à la Glenn Beck, apparently consists mostly of choking up -- with sadness, with rage, with fright, with anything. The staging of his performance didn't help, either. Wearing a microphone taped to his head and at least three T-shirts (all of which he wound up sweating through by the end of the show), Beck stood in front of six video monitors, which flashed images and colors to help suggest scenes. An orchestra played along from the side of the stage. Beck played every character in the show -- from Eddie, the little boy who's clearly supposed to be Beck, to his mother and grandparents, to Russell, the story's Jesus figure. (Because what good is a Christmas story without a Jesus figure?)

The plot goes like this. Eddie's father has died, which we learned, in the stage version, through a hokey series of voice-overs, and his mom is struggling to pay the bills and raise Eddie. Though Eddie has his heart set on a shiny, red bike with a black leather banana seat for Christmas, his mom can't afford it, and she knits him a sweater instead. He freaks out and throws it on the floor of his room, saying it's itchy and he doesn't like it. They go visit Eddie's grandparents, and Eddie sulks the whole night. Instead of staying over on their farm, he makes Mom drive him back home through the snow. He falls asleep in the car. So does Mom! They crash, she dies, he goes to live with Grandma and Grandpa.

Then things start to lose the narrative thread a little bit. Feeling sorry for himself -- understandably, you'd think, since he's now a 12-year-old orphan -- Eddie lashes out at his grandparents, too. His life's been spiraling out of control; first his dad died of cancer, then his mom died in a wreck, and to top it all off, he never got the bike he wanted! So it's no wonder he starts hanging out next door, at an apparently abandoned farmhouse where he meets the mysterious Russell (whom Beck played with an exaggerated farmhand voice that he'd rip a liberal for using to mock hardworking Americans). Russell tells Eddie he has only himself to blame for his problems. So he gets back to sulking. Eventually, Eddie discovers that he was going to get that bike on the night his mom died, but his grandfather had hidden it to give to him the next day; when Eddie demanded to go home, he missed his chance to get it. He winds up taking it from the barn and fleeing the farm. Then he gets lost in a cornfield, the bike breaks down, and a massive metaphor -- er, storm -- blows up the road. Suddenly Russell appears out of nowhere, telling him he's got to weather the storm if he wants to get home. "Eddie, don't fear the storm," Russell says. "Fear the cornfield, don't fear the storm." Wise words, indeed. With more tears, some prayers and some repentance, Eddie survives the storm. Russell shows him around a heavenly meadow, and tells him his parents are there watching over him. Then Russell starts glowing white, and tells Eddie, "You are joy, Eddie! You are joy!" before turning into pure light. Eddie collapses, then wakes up ... back home at his grandparents' farm -- with Mom there! His sorrow has given him a second chance to go back and stop being such an ungrateful brat about the sweater. And everyone lives happily ever after.

For what's supposed to be an inspiration, the story is pretty dark. (Dark enough, in fact, that the children's version of the book, which came out this fall, ditches just about every part of the tale except that Eddie wanted a bike and got a sweater instead.) Some of it is based on his own life -- his mother did die when he was a teenager, though his father didn't, and he grew up relatively poor, like Eddie in the story. Beck's "acting" didn't help lighten the mood much; when he wasn't sobbing, he was practically screaming with resentment, turning lines that only needed a hint of sarcasm into sneers of outrage. At the climactic moment when the storm passes over Eddie, Beck collapsed into a fetal ball on the stage, crying into his hands, while a woman sang a hymn. The handful of people in the theater with me laughed at a few of his corny jokes, but mostly they sat there, silent and impassive, as the show dragged on for more than 90 minutes.

But as hokey and melodramatic as the staging of the novel was, the special added feature for this year's performance was worse. First, we watched Beck start to cry all over again, just remembering how sad it was for him to do the show the year before. Then, Beck's producers sent out four people who personified the themes of the book: a woman whose daughter had died in a car crash; a junkie, whose family rescued him from drugged-out despair; a woman who survived breast cancer in part because someone gave her a copy of Beck's novel during her chemotherapy; and the would-be suicide, who chose life because of Beck's dulcet voice on the radio.

"There is a storm in each of us," Beck said. "A storm is coming. We're all beginning to see it form."

That line woke me from the semi-stupor the show had put me in, because it was the first thing Beck had said all night that bore any resemblance to the deranged, paranoid conspiracy theorist on Fox News. Call Beck crazy, call him dangerous, but when he talks politics, no one could ever call him boring. When he's telling Christmas stories full of pathos and melodrama, though, he's excruciatingly dull. The strange voices weren't enough to overcome the overwrought narrative or the heavy-handed morals in the tale. There wasn't enough of the weirdness, the mania that drives Beck when he talks about how ACORN or SEIU are out to steal the country, or how all of President Obama's advisors are Maoist thugs. Even Beck's crying -- an over-the-top bit of preposterousness on the TV show -- got stale.

By the time Beck finished showing little videos introducing his guests, featuring epigrams from the novel that made clear how their story related to his, there wasn't much time to talk to them. He got them all to agree that life is very hard, and we all have storms to pass through. "I want a T-shirt that says, 'I survived 2009,'" he said.

And then he started talking about Tiger Woods, of all things. "He's a pretty good golfer, man, he's the best anybody has ever been at that," he said. "That's his job -- to play golf. And he's got half a billion dollars for playing golf. He's got a yacht, he's got multiple houses. He's -- well, he had a car, that's a fixer-upper at this point. He married a Swedish supermodel. And somehow or another, he was still empty inside." Tiger's story, apparently, was just another piece of Beck's. "Find out how to fill that emptiness, and it ain't with stuff," Beck said. "You can either be a victim, or a victor."

The choir sang us out of the theater, a little dazed, two and a quarter hours after the show had started. The few other people in the audience had loved it. "It was a great spiritual message, you know? Inspirational," said Barry Taylor, a professional magician -- yes, really -- from Rockville, Md., who watches Beck on TV and decided to come see the show after hearing him promote it endlessly for the last few weeks. "I've got a lot of shows coming up -- I'll be infused with just a positive energy."

It didn't take long for the theater to empty out. Beck is rerunning the whole thing again in a week, but the employees at the cinema seemed glad to get back to the usual fare in Theater One -- "The Twilight Saga: New Moon." Maybe next year, Beck can add a few vampires to the program. Sweaters alone, it seems, aren't quite enough to draw a crowd.