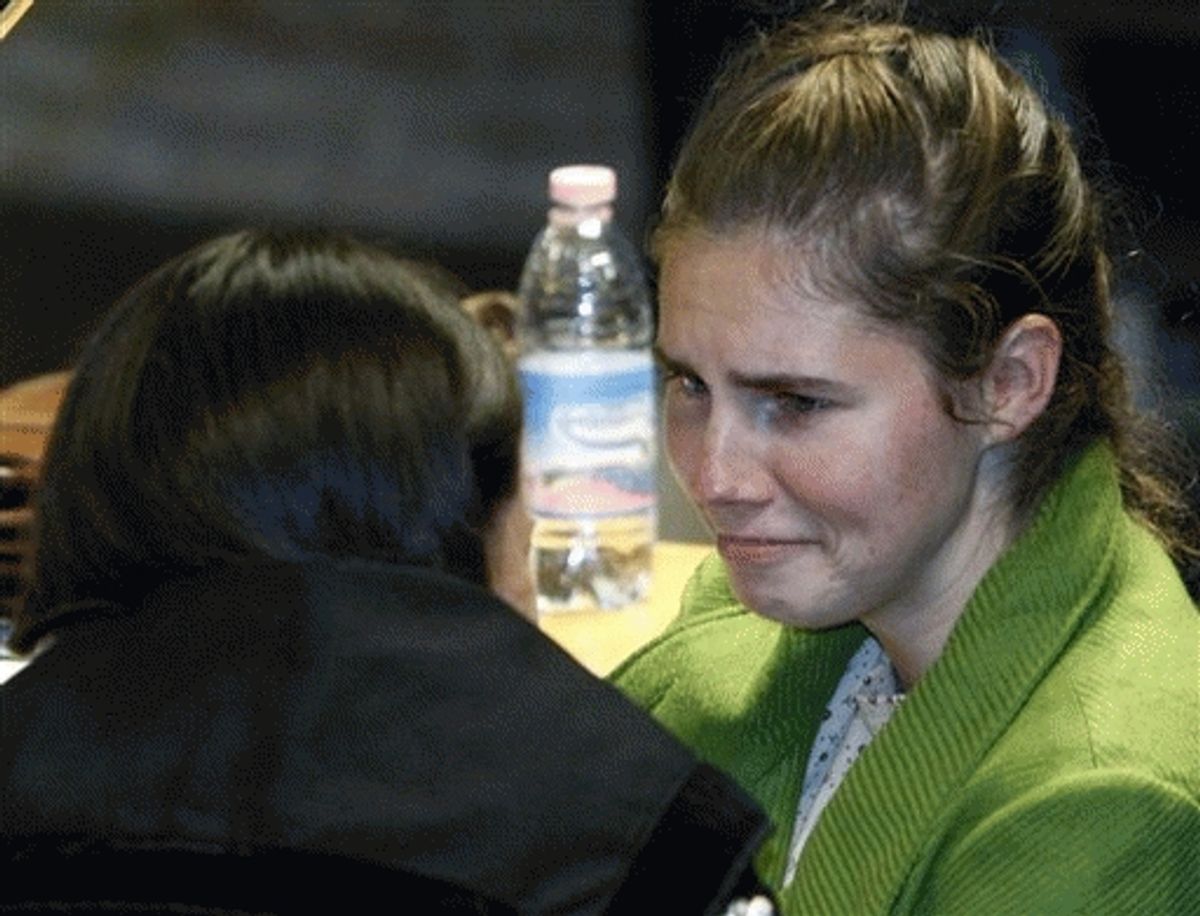 U.S. murder suspect Amanda Knox talks to a lawyer prior to a defense hearing at the court in Perugia, central Italy, Thursday, Dec. 3, 2009.
--

The family of a slain British woman said Saturday they were pleased with the murder conviction of American student Amanda Knox but said there was no sense of celebration.

Meredith Kercher's relatives made their first comments since a jury in Perugia, Italy, announced early Saturday that they had convicted Knox and sentenced her to 26 years in prison for the 2007 murder.

The court also convicted Knox's co-defendant and former boyfriend, Italian Raffaele Sollecito, and gave him a 25-year jail term. The two reportedly both were under suicide watch in separate prisons.

"Ultimately we are pleased with the decision, pleased that we've got a decision, but it's not a time for celebration," Lyle Kercher, the victim's brother, said.

Kercher's sister, Stephanie, said the verdict "does bring a a little bit of justice, for us and for her." But she added: "Life will never be the same without Mez."

Kercher, 21, was Knox's roommate while they studied in Perugia.

Her body was found in a pool of blood with her throat slit on Nov. 2, 2007, at the apartment they shared. Prosecutors said the Leeds University student was murdered the previous night.

After a yearlong trial and some 13 hours of deliberations, the jury read out the verdict in a packed courtroom shortly after midnight. Knox burst into tears and murmured "No, no," clinging to one of her lawyers.

Minutes later, the 22-year-old from Seattle was put in a police van with sirens blaring and driven back to her jail just outside Perugia.

She spent her first night in jail as a convicted woman under suicide watch, the ANSA news agency and other reports said. Sollecito, also kept under suicide watch -- which is common in such cases -- received the visit of one of his lawyers, ANSA said.

In Italy verdicts can be appealed by both sides. The prosecutors said they were satisfied with the ruling and would not seek to appeal, even though the court did not grant their request for life imprisonment. Prosecutor Manuela Comodi said that the verdict "recognizes the defendants are guilty of all the crimes they had been charged with."

Both the Knox family and lawyers for Sollecito have announced an appeal.

The American's father, Curt Knox, asked shortly after the verdict if he would fight on for his daughter, replied, with tears in his eyes: "Hell, yes."

Throughout the trial, prosecutors depicted Knox as a promiscuous and manipulative she-devil whose personality clashed with her roommate's. They say Knox had grown to hate Kercher.

"It appears clear to us that the attacks on Amanda's character in much of the media and by the prosecution had a significant impact on the judges and jurors and apparently overshadowed the lack of evidence in the prosecution's case against her," the Knox family said in a statement.

Prosecutors argued that on the night of the murder, Knox and Kercher started arguing, and that Knox joined Sollecito and Ivory Coast national Rudy Hermann Guede in brutally attacking and sexually assaulting the Briton under "the fumes of drugs and possibly alcohol."

Guede was convicted previously and sentenced to 30 years. He denies wrongdoing and is appealing.

Knox said Kercher was a friend whose slaying shocked and saddened her.

Defense lawyers maintained there was not enough evidence for a conviction and no clear motive. They disputed DNA traces that the prosecution linked to Knox and Sollecito as inconclusive, and in some cases said the evidence had been inadvertently contaminated.

The pair also was convicted of illegally carrying a weapon -- the knife -- and of staging a burglary at the house where the murder occurred by breaking a window, supposedly in an effort to sidetrack the investigation.

Knox also was convicted of defaming Congolese man, Patrick Diya Lumumba, whom she accused of the killing. Lumumba was jailed briefly but was later cleared. Knox said during the trial that police pressure led her to initially accuse an innocent man.