Introducing Salon's new forum for debating the hottest topics in movies. Plus: My fave film(s) of the decade 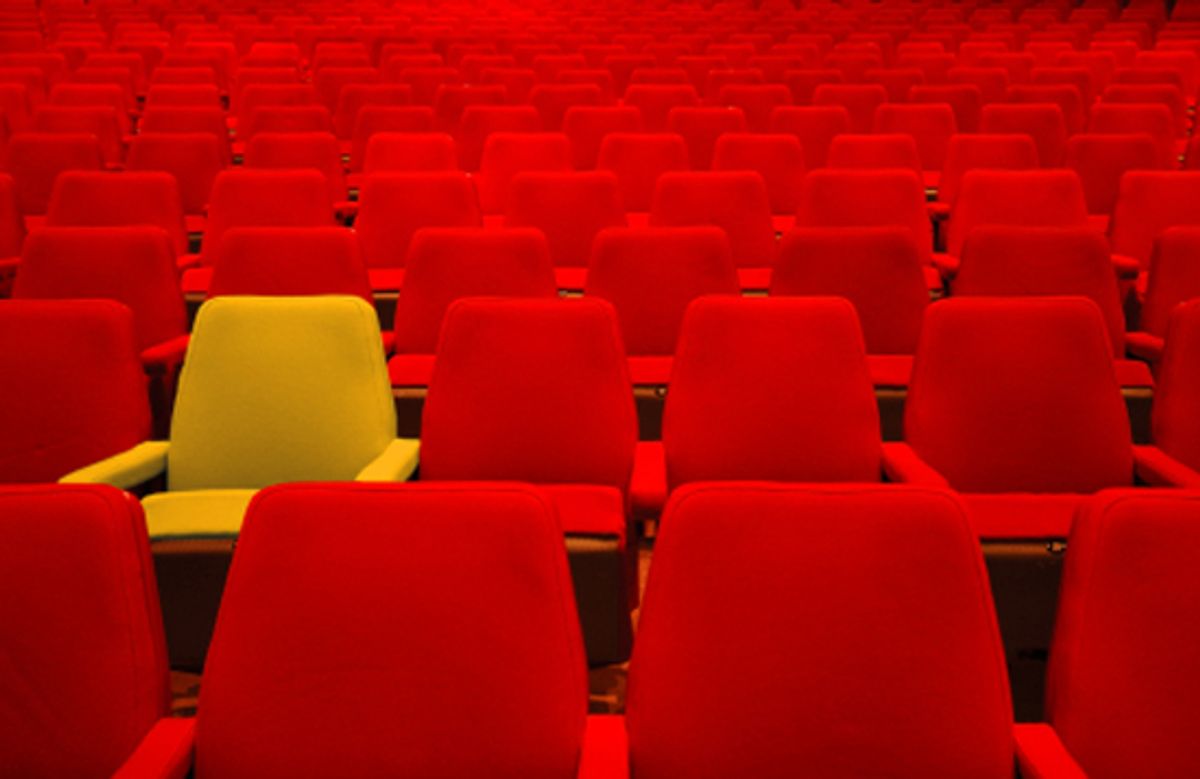 Like almost everyone who grew up loving movies, I got hooked at an early age when I realized that watching them was both a private experience and a communal one. Whether it was seeing Hiroshi Inagaki's three-and-a-half-hour samurai epic "Chushingura" at a repertory cinema with my parents, sneaking into "Diamonds Are Forever" with a group of overstimulated elementary-school pals, or sitting all alone, wrapped in a blanket and terrified, in front of "The Mummy's Tomb" on my big brother's black-and-white TV, watching a movie was at once something intimate and private, something that happened to me alone, and something I wanted to share with those I cared about.

According to many so-called experts (including the one writing this post), the communal element of moviegoing is in critical condition, with a downward-trending red zigzag, virtually on the verge of extinction. I suspect we've been overstating the case more than a little. Sure, as my reporting over the past few years has made clear, the delivery mechanism for motion pictures is shifting into all kinds of technologies undreamed of by Darryl F. Zanuck and Orson Welles, and certain sorts of films will probably be seen much less, if at all, projected on the screens of conventional movie theaters.

But the private-meets-communal nature of film -- and of film culture -- isn't something that mere technology can destroy. Whether people are watching a Lillian Gish silent at a nickelodeon on Flatbush Avenue, watching a Lucas space opera at a shopping-sprawl multiplex or watching Joe Swanberg's latest micro-indie on a chip inside their skull doesn't matter that much. As soon as the movie's over they want to talk to someone about it, share their delight or outrage, compare favorite lines and favorite explosions (metaphorical or otherwise), discuss how the characters' plight made them reconsider their own lives or filled them with despair for the future of humankind.

It's in that spirit that we're delighted to bring you Film Salon, a new collaborative forum that aims to bring together movie lovers of all kinds -- bloggers, critics and academics; directors, screenwriters, producers and other professionals -- to debate the most exciting topics in the film universe. Our contributors will come from all over the movie world and all over the Internet; some will become regulars (I hope), while others may show up once in a blue moon.

We invite you to join us. Obviously we're looking for vigorous debate in the comments, and I hope our contributors will leap in there from time to time as well. If you'd like to become a Film Salon contributor, write me directly and we'll talk about it. Another great way to join the conversation is to start blogging on Open Salon. If you tag your post "film salon," we'll be sure to notice it, and consider it for posting here.

For our opening salvo, I asked a select group of contributors to share a few thoughts about their favorite film of the 2000s, aka the Decade That Ended Without a Satisfactory Name. Today's esteemed contributors are directors R.J. Cutler and Nicole Holofcener (in my non-humble opinion, two of America's most important and most underappreciated filmmakers), Chicago Reader critic Jonathan Rosenbaum and the New Republic's Chris Orr. I suggested that they avoid film-critic ideas like "best" or "most important" and discuss instead the movie released during the past 10 years that meant the most to them personally. Amazingly, we've had no duplicate selections among the first 30 or so submissions, although two directors (I think) have each landed two different films on the list.

As one director wrote back when I asked her to participate, this is a terrible thing to do to a person, asking them to choose a single favorite from a whole decade of movie watching. Reading all these submissions has been an amazing privilege, one that's reminded me of so many wonderful movies (and reminded me of a few I badly need to see). I've also gotten several responses I never would have expected, and at least one that made me howl out loud with a mixture of laughter and outrage. I'd love to tell you about it, but that would be cheating; stay tuned as we roll out these responses over the days ahead.

I couldn't in good conscience demand this terrible thing from people I respect without demanding it of myself; and in response I have decided to cheat egregiously. When I ask myself what movie of the last 10 years has meant the most to me, I then screw up my eyes at myself and ask, in calculated fashion, "What do I mean by 'me'?" Do I mean as a human being, a family man in his 40s who has watched thousands of movies over the years? Do I mean as a critic who prides himself on discovering little-noticed gems half-buried in the mud of global film culture? Do I mean as a reporter obsessed with the changing marketplace, and ever-shifting aesthetics, of what we used to call "art cinema"?

For me and many other lovers of classic European and American cinema, this decade's great discovery was the French director Arnaud Desplechin, and especially his ravishing 2004 "Kings and Queen," a bittersweet ode to female beauty (as personified by the amazing Emmanuelle Devos), doomed love, familial pain and the movies that seemed to imbibe the spirit of Hitchcock and Bergman at their best and blend them into something that was distinctively modern and original. For pure cinematic enjoyment, nothing else this decade came close.

I could go on at great length on the subject of this decade's undiscovered gems, films that I suspect almost no one besides me ever saw (or that hit home with me, and apparently with nobody else). As a matter of fact, that would make a great Film Salon topic. Your thoughts, please? But if I force myself to home in on one memorable selection, that would be "Innocence," a troubling and enigmatic girls-boarding-school allegory from another French filmmaker, Lucile Hadzihalilovic. (Yeah, I've picked two movies from Frogland, and I know exactly how that looks. I can't help being the guy that I am, OK? Now pour extra ketchup on the freedom fries.)

"Innocence" struck some viewers, including New York Times critic Manohla Dargis, as a pervy spectacle bordering on pedophilia, a perception that destroyed its already limited commercial potential. But Hadzihalilovic's adaptation of Frank Wedekind's novel, while deliberately dark and provocative, depicts no such thing, instead spinning a complicated, tragic and surpassingly beautiful fable about the arduous journey from girlhood into womanhood.

But when I ask myself what film of the "aughts" was both an artistic and commercial breakthrough, what film galvanized a global audience while blending pop fantasy, wrenching melodrama and historical-political relevance, then I arrive at a final answer that unites and satisfies all three of my personas. Both a heartbreaking tale of Spain under fascism and a soaring reinvention of fairy tale archetype, Guillermo del Toro's "Pan's Labyrinth" brought "Lord of the Rings" viewers to art-house cinema, and art-house buffs to a fantasy flick. The greatest film of the decade? Probably not. But as a film that carved out a rich and satisfying middle way between Hollywood pandering and cinephile obscurantism, a film that won awards and sold tickets without compromising its intelligence or daring, it might be the one that meant the most.

We'll be rolling out lots of new stuff as Film Salon moves forward, including a series of essays from guest critic Matt Zoller Seitz on the most important image makers of the decade. (I can promise you'll be delighted, surprised and potentially horrified.) Welcome to Film Salon. Jump in, the water's fine!