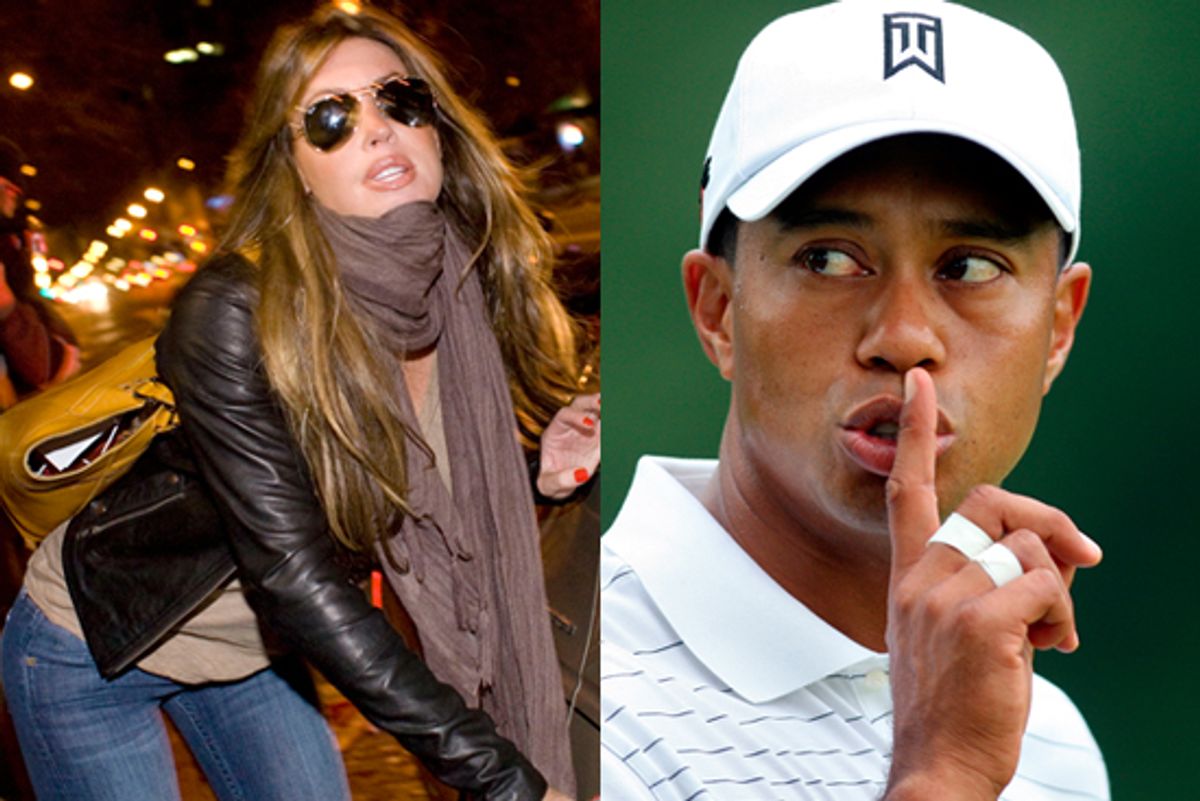 Left: Rachel Uchitel in front of her home in New York, in November. Right: Tiger Woods at the WCG Bridgestone Invitational golf tournament in Akron, Ohio, in August.
--

It's somehow fitting that in the waning days of this decade, we find ourselves glued -- yet again -- to the spectacle of a tarnished public figure embroiled in a sex scandal. Congratulations, 2000s -- has there been a sleazier era since Caligula's?

The Tiger Woods debacle, which started with a fender bender and possible domestic dispute and grows more absurdly, endorsement-losingly epic by the hour, serves not just as a reminder that even seemingly unimpeachable heroes get their freak on but also as a flamboyantly cringe-worthy metaphor for our quick and dirty culture itself.

What's fascinating about Tiger's undoing isn't his wandering eye or his apparently bottomless sexual appetite (although there's rich cocktail patter in both) but the stark contrast between his demure Scandinavian wife and the parade of Hooters girls, porn stars and possible professional escorts who've come out of the woodwork. In this corner, there's Elin Nordegren, the press-shy model and mother of Woods' two young children. And in this rather crowded other corner, there's Holly Sampson, star of "OMG, Stop Tickling Me" and "Flying Solo 2." There's cocktail waitress Jaimee Grubbs, who is currently "shopping around" her torrid story to networks. There's lingerie model Jamie Jungers, who claims to have been romping with Woods in his marital bed the night his father died. There's Mindy Lawton, who eagerly told the News of the World about the "rough" sex she had with the "well-endowed" athlete. And, at last count, 12 other women who may have been on the receiving end of the golf pro's legendary stroke.

In short, Woods appears to have more paramours than Nadya Suleman has babies. No wonder he announced Friday he's taking "an indefinite break from golf." If half of what's been claimed about the guy is true, we applaud him for still having the energy to type that message on his Web page.

And while the gazillion females currently selling their claims of Tiger mating are no doubt special ladies with their own unique thoughts and feelings -- and while we generally think only she who has never done a walk of shame should cast the stones -- we cannot help noting a certain sameness here, a certain glossy, duckface-making sexuality at work here. You know what we're talking about: the skank.

The skank has always been with us, but in recent years has become as inescapable as hot gum on a summer sidewalk. The skank proudly flaunts her tramp stamp. She leaves her panties at home when she goes nightclubbing. She gets her own series on Oxygen. She gets paid for sex with Eliot Spitzer and winds up an advice columnist for the New York Post. She gets in fights with other skanks. She stars in a sex tape, gives you a lap dance and makes out with a girlfriend. And she will definitely lift her wifebeater for some Mardi Gras beads, pull your hair, and poop on Flava Flav's floor.

I'm not a conspiracy theorist, but are they putting roofies in the water supply or what? Despite the near constant cries of hell-in-a-handbasket moral turpitude, the skank rules, ever at the ready to hump the nearest pole.

What is it about the pouty, nip-slipping actress or the shirtless, sunglass-wearing douchebag that has skyrocketed them from the wrong side of the tracks to the front page of Star magazine? Is it that, in a country where "abstinence-only" is still a curriculum option, we have a rebellious attraction to the naughty and NSFW? Is it that when politicians and sports stars are the impossible arbiters of family values, they're more likely to engage in spectacular feats of self-sabotage with partners nothing like the ones waiting at home? Is there a certain emotional safety in seeking out a liaison offering nothing that lasts but a raging case of crabs?

Or is it that the skank, in all his or her tacky glory, is the sexual equivalent of a Twitter update -- pleasantly forgettable and right to the point? We're all busy, overstimulated people -- and if we're busy, imagine how booked Tiger Woods is. We don't have the time or attention for nuance, seduction or, God forbid, romance. So maybe it's not such a leap to understand the appeal of those who put themselves out there like the butt-presenting primates we all ultimately are. It's not about right or wrong, good or bad. It's just about what's indiscriminately easy.

We don't go to Taco Bell and ask if the chalupas are fresh. We go because we know what we're getting, and we know what we're getting because there's a picture right there behind the counter. Tiger Woods may likewise have surmised what he was getting when he looked at the menu at that Las Vegas nightclub and saw Jaimee Grubbs. And Grubbs, similarly, may have known what she was looking back at. Because skank is no longer the primary domain of those with a sunbed tan and too much hair product. Sure, those looking for skank can always find it in a late-night Tila Tequila streaming video. But sometimes, it's a beloved family man, a clean-cut guy in a cap, asking you to take your name off your phone.