What's the point of moving the essential elements of this detention camp to Illinois? 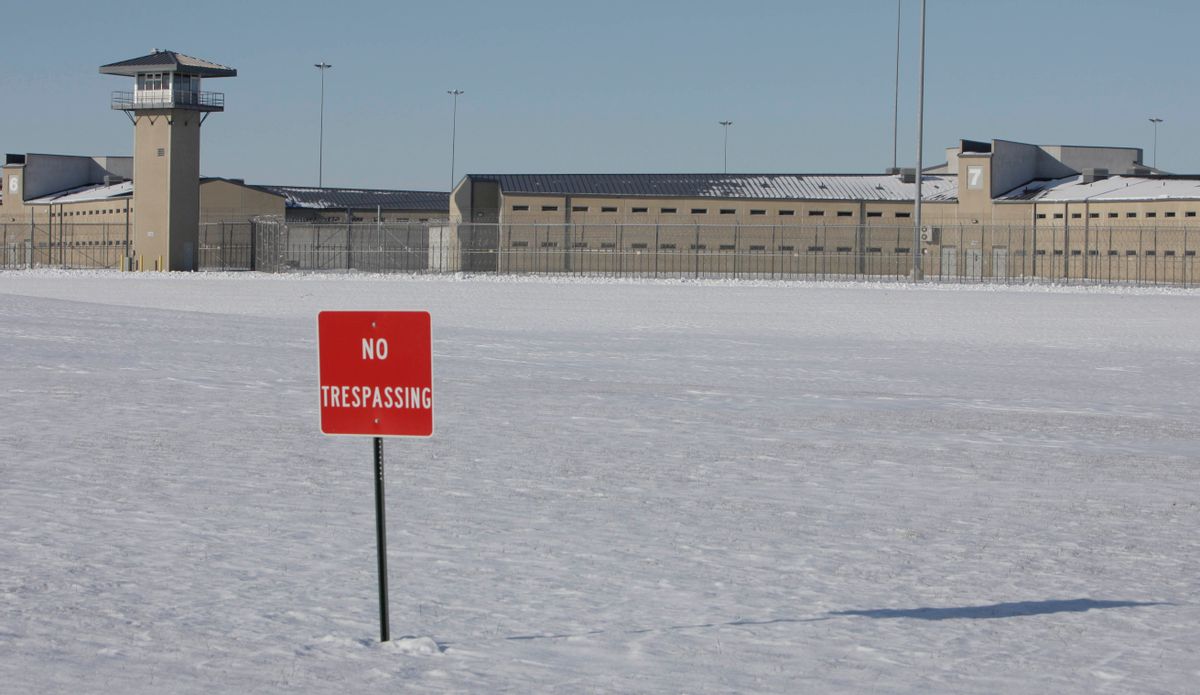 A No Trespassing sign stands in the snow outside the Thomson Correctional Center, Tuesday, Dec. 15, 2009, in Thomson, Ill. President Barack Obama today ordered the federal government to acquire the state prison in Thomson to be the new home for a limited number of terror suspects now held at the U.S. detention facility at Guantanamo Bay, Cuba. The federal government will acquire Thomson Correctional Center, transforming the prison in a sleepy town near the Mississippi River into a prison that exceeds supermax standards. (AP Photo/(M. Spencer Green) (M. Spencer Green)
--

The Obama administration announced today that it will create a new "supermax" facility in Thomson, Illinois, and will transfer to it many of the detainees currently held at Guantanamo.  Critically, none of those moved to Thomson will receive a trial in a real American court, and some will not be charged with any crime at all.  The detainees who will be given trials won't go to Thomson; they'll be moved directly to the jurisdiction where they'll be tried.  The ones moved to Thomson will either (a) be put before a military commission or (b) held indefinitely without charges of any kind.  In other words, they'll have exactly the same rights -- or lack thereof -- as they have now at Guantanamo.

William Lynn, Obama's Deputy Defense Secretary, sent a letter today (.pdf) to GOP Rep. Mark Kirk of Illinois, answering multiple questions Kirk had posed, and made clear that all Thomson detainees will either have military commissions or indefinite detention without charges; none will get real trials (click images to enlarge):

The administration has already announced that it will rely on the Bush/Cheney theory to justify its indefinite detention power -- that Congress implicitly authorized that when it enacted the 2001 Authorization to Use Military Force.  But because Congress has banned the transfer of any Guantanamo detainees to the U.S. for any reason other than to be tried in a court, the administration will now seek express legal authority to transfer detainees inside the U.S. to hold them without charges indefinitely. Former White House Counsel Greg Craig said back in February that it's "hard to imagine Barack Obama as the first President of the United States to introduce a preventive-detention law."  One no longer needs to "imagine" it; it's soon to come.

Particularly Orwellian was Lynn's response to Kirk's inquiry about which detainees will be given the gift of an actual trial:

How perverse.  Lynn is right that prosecutions traditionally occur only "when admissible evidence or potentially available admissible evidence will probably be sufficient to obtain and sustain a conviction."  But traditionally, what happens when such evidence is insufficient is not that the state just imprisons them anyway with no trial or puts them before some less rigorous tribunal; what's supposed to happen when the state cannot convict someone is that the individuals are not charged and therefore not imprisoned.  But here, the Obama administration is turning that most basic principle on its head:  only those who it knows it can convict will get trials, but the rest will be shipped to Thomson -- Gitmo North -- to be put before a military commission or simply imprisoned without charges of any kind.

The sentiment behind Obama's campaign vow to close Guantanamo was the right one, but the reality of how it's being done negates that almost entirely.  What is the point of closing Guantanamo only to replicate its essential framework -- imprisonment without trials -- a few thousand miles to the North?  It's true that the revised military commissions contain some important improvements over the ones used under Bush:  they provide better access to counsel and increased restrictions on the use of hearsay and evidence obtained via coercion.  But the fundamental elements of Guantanamo are being kept firmly in place.  What made Guantanamo so offensive and repugnant was not the fact that it was located in Cuba rather than Illinois.  The primary complaint was that it was a legal black hole because the detainees were kept in cages indefinitely with no charges or trials.  That is being retained with the move to the North.

There is, I suppose, symbolic value in closing Guantanamo.  But what made Guantanamo such an affront to basic liberty and the rule of law was far more than symbolism, and it certainly had nothing to do with its locale.  If anything, one could argue that it's now more dangerous to have within the U.S., on U.S. soil, a facility explicitly devoted to imprisoning people without charges.  Even worse, by emphasizing that Thomson will be an even more "secure" supermax than the utterly inhumane hellhole at Florence, Colorado -- even boasting that it will be the most secure prison "of all time" -- it's likely that individuals who have never been charged with any crime will be held indefinitely in a facility even worse than Guantanamo.

Are we really supposed to believe that the Muslim world -- at whom this symbolism is supposedly aimed -- is so simplistic that they'll be happy because Muslims are now being indefinitely imprisoned with no charges in Illinois instead of on a Cuban island?  In many ways, this move is classic Obama:  pretty words, rhetorical appeals to lofty ideals, self-congratulatory preening, accompanied by many of the same policies that were long and vehemently condemned by him and most of his supporters.

The creation of a "Gitmo North" in Illinois is hardly a meaningful step forward. Shutting down Guantánamo will be nothing more than a symbolic gesture if we continue its lawless policies onshore.

Alarmingly, all indications are that the administration plans to continue its predecessor's policy of indefinite detention without charge or trial for some detainees, with only a change of location. Such a policy is completely at odds with our democratic commitment to due process and human rights whether it’s occurring in Cuba or in Illinois. In fact, while the Obama administration inherited the Guantanamo debacle, this current move is its own affirmative adoption of those policies.

It's hard to argue with that.