Help Salon count down the 10 nuttiest newsmakers in the last 12 months, and pick our No. 1 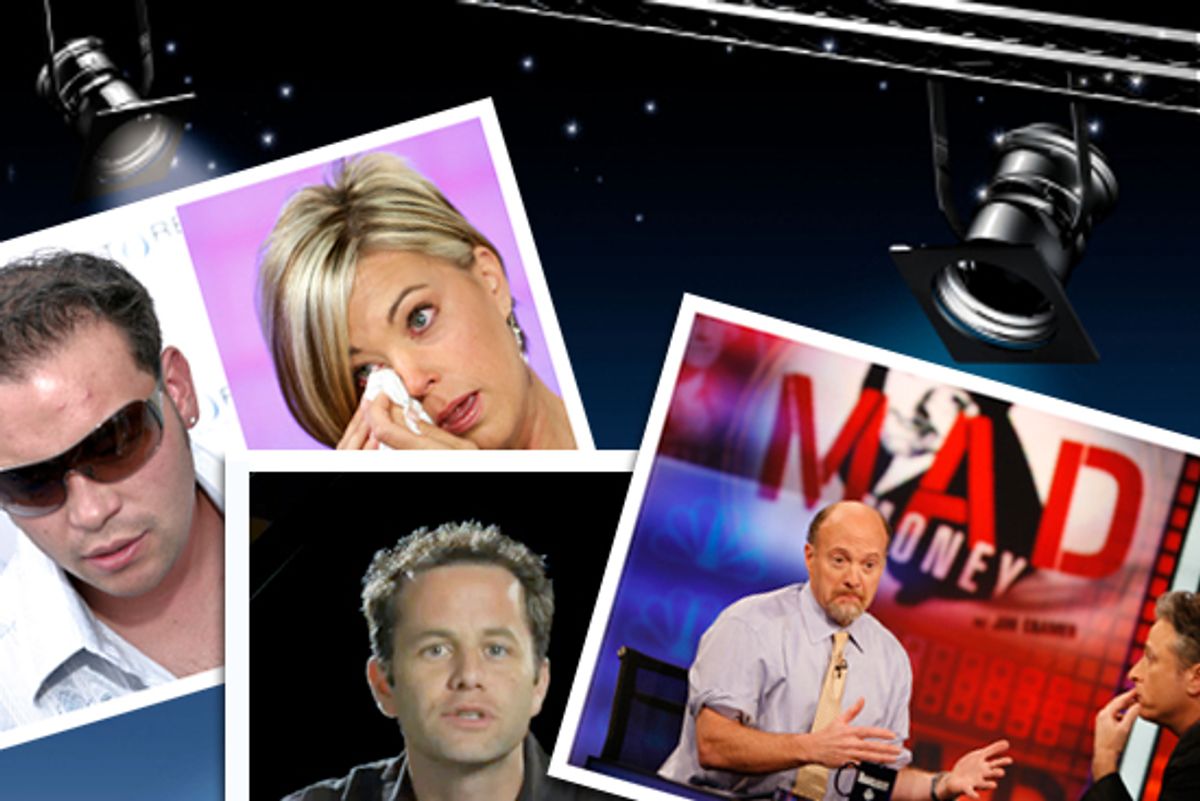 Left to right: The Gosselins, Kirk Cameron and Jim Cramer
--

News came so fast in 2009 it made us dizzy: A brand-new Democratic White House team (led by our first African-American president); economic catastrophe and, maybe, tiny green shoots of recovery; legislative milestones -- a historic stimulus -- and legislative gridlock (most everything else); one war winding down but another one expanded; grass-roots anger on the right and left about a Wall Street crash that turned out fine for much of Wall Street but kept crashing for the rest of us. We had big celebrity deaths (Ed McMahon, Walter Cronkite, Farrah Fawcett and Michael Jackson, all in four weeks); big celebrity scandals (Tiger Woods, Mark Sanford) plus big celebrity death scandals (thanks to Jackson, his wacky family and his phalanx of physician-toadies). All of it was enlivened by an explosion of high-decibel right-wing paranoia and hatred that made our problems seem increasingly surreal and intractable.

But if 2009 was a year of big news, it also was most notably the year of Big Crazy. From Birthers to death panels, 9/11 Truthers to evolution deniers, it was hard to get through a week without stepping in a steaming pile of just-plain-nuts. So let Time magazine come up with its dutiful "Person of the Year," working harder each December to delight, confound, disgust or simply bore us. Salon decided to live up to the news environment of 2009 and to round up the Year in Crazy -- -- documenting the people responsible for the craziest behavior of the year.

It was very hard (in fact, we're still mulling our top pick). There's so much crazy to choose from. Then there's a whole lot of shiny, vexing and perplexing faux-crazy. Bill O'Reilly certainly went loony during his tête-à-tête with me in June, but a certain kind of authoritarian, bad-daddy nuttiness is O'Reilly's reliable shtick; none of us knows what the Fox host really believes, except that he loves his big paycheck and getting to humiliate people. We think O'Reilly is vile, but overheated as he sometimes gets, we don't think he's crazy. Same with Rush Limbaugh. His "anal poisoning" obsession aside, Limbaugh is sane enough to keep making millions and to stay in the right-wing "telling it like it is" media mainstream.

Similarly, someone like Liz Cheney -- awful but not crazy -- could casually suggest that insane Birther theories made sense because "people are uncomfortable with having, for the first time ever ... a president who seems so reluctant to defend the nation overseas." Sarah Palin, who's wacky and destructive but not crazy, except like a fox, went a little bit crazy on Facebook, warning that Obama's healthcare reform would create "death panels" to kill her elderly parents and her child with Down syndrome. O'Reilly, Limbaugh, Cheney and Palin all display behavior that's better described as brazenly opportunistic than crazy.

It went over so well that folks like Chuck Grassley and Newt Gingrich rode the crazy train for a while, defending Palin's lies. Crazy became so influential this year that the New York Times finally assigned someone to the Right-Wing Crazy beat, asking reporters and editors to watch Fox News and track the mutterings of O'Reilly and Glenn Beck and Limbaugh and the echo chamber of crazy, after the paper of record was taken by surprise by the epidemic of lethal lunacy in the Birther controversies and "town hells" this summer, and failed to cover Fox's crusade to topple White House "green jobs" czar Van Jones. (The New York Times is crazy to listen to right-wing bullies, but we're only talking about individual crazy behavior here.)

We're not sure what explains the sudden explosion of crazy. Is it deep, destabilizing economic insecurity? The looming 2012 apocalypse? Having a black president? No one knows for sure. All we know is that within the GOP's base, and on certain frontiers of the left, as well as the wacky-science crowd, crazy is hot this year. Crazy sells. It's the year of crazy liberation! Say it loud, I'm nuts and proud.

So over the next few days we'll honor 10 people from the Year in Crazy. Leave your nominations and votes in our letters section, and you could help us pick our No. 1. Meanwhile, hold on to your sanity, because we think it's coming back strong in the next few years. We've been trying to popularize a few catchphrases -- Sanity: It's patriotic! Sanity: Just do it! Sanity: It's not just for breakfast anymore! -- and you can add a few of your own in comments, too.

But the crazy will be here all week, trying to reassure you in this holiday season that you're not alone: All of our families look downright sane compared to the cavalcade of crazy we endured this year.