The long, painful road to a disappointing deal 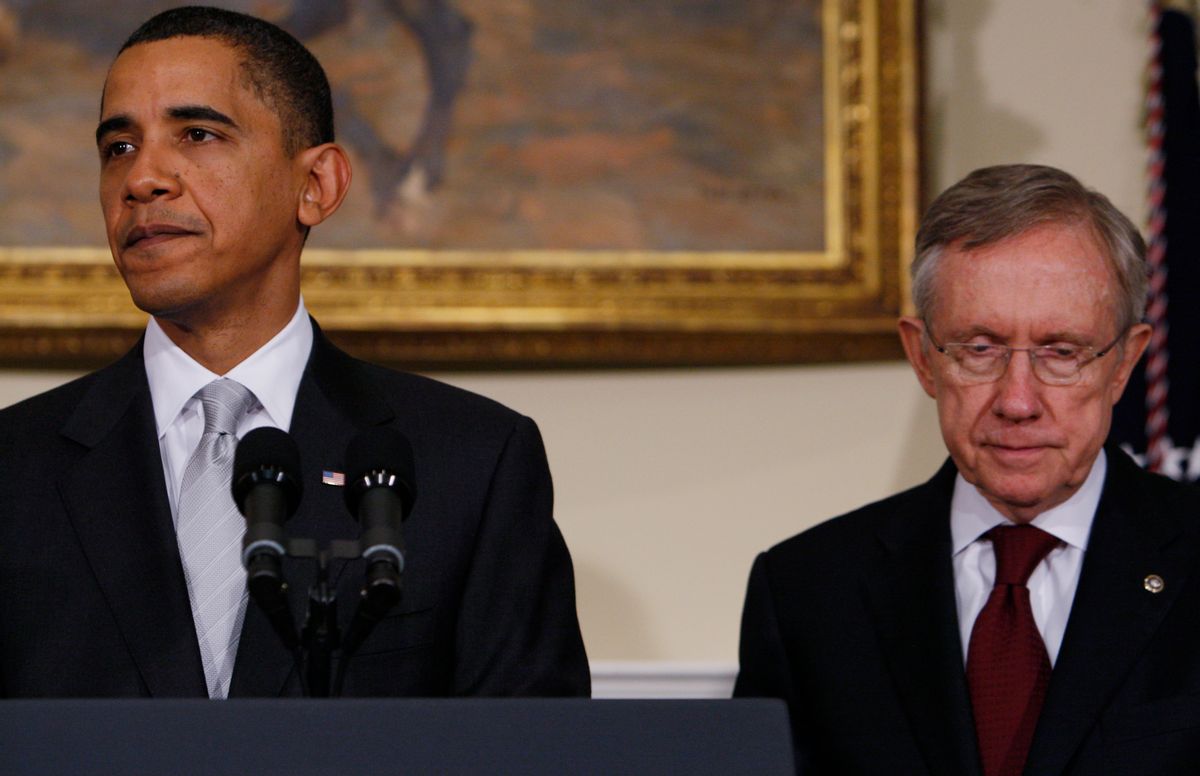 Don't make the perfect the enemy of the better," says the president and congressional insiders when confronted with the sorry spectacle of a healthcare bill whose scope and ambition continue to shrink, and whose long-term costs to typical Americans continue to grow. They're right, of course. But by the same logic, neither the White House nor congressional Democrats will be able to celebrate the emerging legislation as a "major overhaul" or "fundamental reform." At best, it's likely to be a small overhaul containing incremental reforms.

In other words, the private insurers are winning and the public is losing.

Pharmaceutical companies are winning as well. Yesterday, proposals to allow US pharmacies and wholesalers to import prescription drugs from Europe and Canada were defeated in the Senate. No matter that American consumers pay up to 55 percent more for their prescription drugs than Canadians, or that the measure would have saved the government at least $19.4 billion over ten years (according to the Congressional Budget Office). Big Pharma's argument that the safety of such drugs couldn't be assured was belied by the defeat of another proposed amendment that would have allowed drug imports only if their safety and economic benefits were certified by the Secretary of Health and Human Service.

Doctors and hospitals are also winning. More and more of the putative "savings" from healthcare reform ("savings" should really be understood as projected costs that are under the wildly-escalating costs projected without such savings) rely on contraints on future Medicare spending. But the details of such constraints keep vanishing, while ever more of the messy work of coming up with them is assigned to a so-called Medical Advisory Board that will supposedly recommend them later on. What no one wants to admit is that Congress never actually implements promised Medicare savings. When crunch time comes, it caves in to the AMA and the AARP. In a few years time, when boomers swell the ranks of seniors, and the political power of the AMA and AARP together rival that of Wall Street, the cave-ins will be boggling.

Meanwhile, opponents of abortion are winning, too. Ben Nelson (a Nebraska Democrat who enjoys being the spoiler even as much as Joe Lieberman) is holding out for even more restrictions.

The political reality right now is that Harry Reid will do anything to get sixty votes -- which means Lieberman, Nelson, and even Olympia Snowe are able to use extortion on behalf of Big Insurance, Big Pharma, the AMA, and abortion foes. The President, meanwhile, remains eerily above the fray. Having closed deals months ago with Big Insurance, Big Pharma, and the AMA -- in order to get their support in exchange for guaranteeing them big profits -- his only apparent interest is keeping the deals going while helping Reid corral sixty votes for just about anything. (The deals have caused some awkwardness for the White House. Drug importation would have cost Big Pharma far more than the $80 billion price tag it agreed to, forcing the White House to oppose importation even though the President had publicly supported it during his presidential campaign last year, and even though John McCain supported yesterday's amendment.)

Is the effort worth still worth it? Yes, but just. Private insurers will have to take anyone, regardless of preconditions. And some 30 million people who don't now have health insurance will get it. But because Big Insurance, Big Pharma, and the AMA will come out way ahead, the legislation will cost taxpayers and premium-payers far more than it would otherwise. Cost controls are inadequate; in fact, they barely exist. If Wall Street's top brass are "fat cats," as the President described them last weekend, the top brass of Big Insurance, Big Pharma, and the AMA are even fatter. While they don't earn as much, they're squeezing the public for even more.

We are slouching toward healthcare reform that's better than nothing but far worse than we had imagined it would be. Even those of us who have seen legislative sausage-making up close, even those of us who never make the perfect the enemy of the better, are concerned. That two or three senators are able to extort as much as they have is appalling. Why hasn't Reid forced much of the bill into reconciliation, requiring only 51 votes? Why has the President been so cowed? In all likelihood, the White House and the Dems eventually will get a bill they can call "reform," but they will not be able to say with straight faces that the reform is a significant improvement over the terrible system we already have.