It's who's there with you that matters 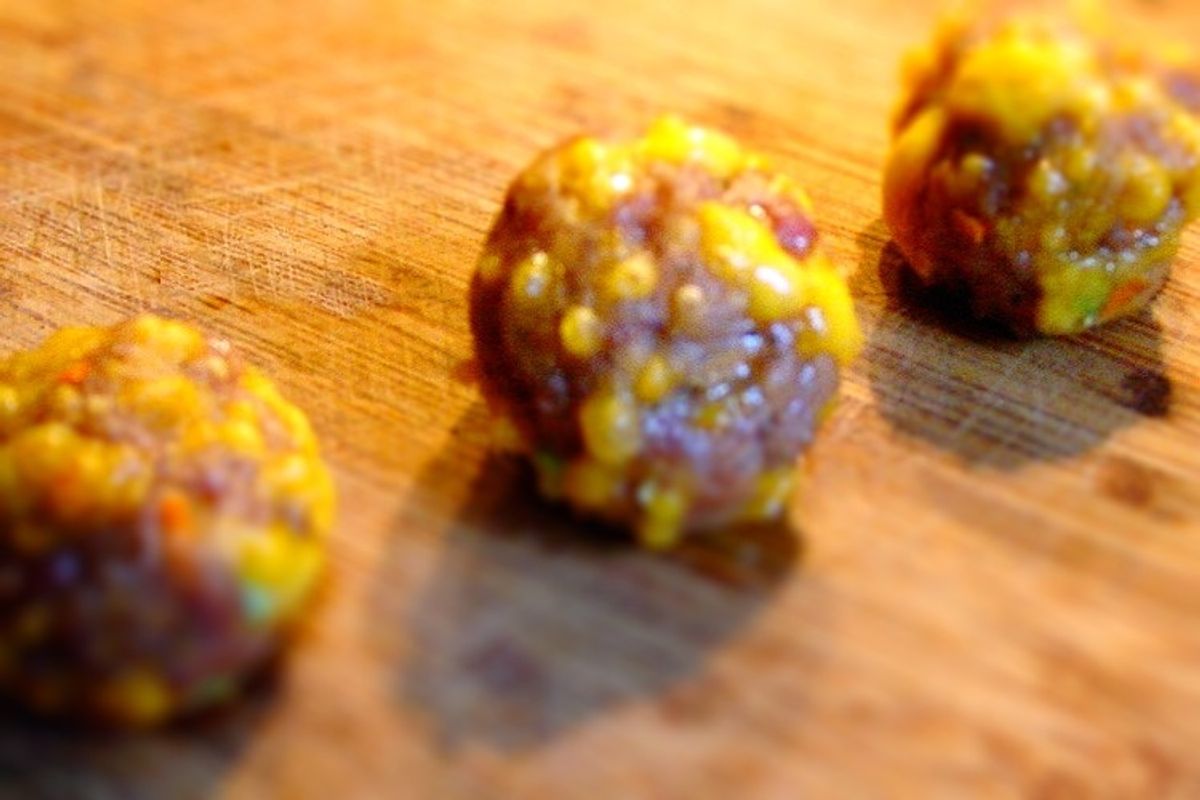 We asked members of our Kitchen Cabinet to briefly share some of their holiday memories with us, and we're sharing them with you all this week. Tonight or tomorrow, perhaps, many of you will be rushing around your kitchens, stressed about the food you're going to serve. So take a moment with our Cabinet members to remind you that, regardless of what's on the plate, the table and who's around it are what matters.

Sausage balls, made with Bisquick, rat trap cheddar, Jim Dandy country sausage, a little cayenne, and a little more sage: That's what the holiday season tastes like here, in Oxford, Miss. On my birthday, Dec. 22, Blair, my wife, makes a gross of the little orbs, shovels them in brown paper bags, and transports them to City Grocery, my buddy John Currence's bar.

Over the course of an extended happy hour debauch, I work the floor, offering sausage balls to all comers, while my friends alternate between pulls of whiskey, bites of balls, and inhalations of hot dogs, capped with Blair's chocolate-and-red wine-goosed chili. As the night goes on, the pot of chili disappears, the grease-splotched bags threaten collapse, and so do I.

Almost 30 years ago, I began giving a New Year's Day party where I introduced my friends to my parents. Gradually the party grew from dessert and drinks into a full-blown African-American New Year's spread, complete with collard greens, black-eyed peas and rice (aka Hoppin' John), and roast pork with cracklins. The collard greens symbolize money, black-eyed peas are considered lucky in some parts of Africa, and the pork is traditional, probably as a desire to live higher on the hog in the upcoming year. The feast celebrated my ancestors.

As I learned more about Kwanzaa, I added elements of that celebration -- a centerpiece, kinara, and more. After I moved to Brooklyn, N.Y., the New Year's Kwanzaa party grew and at its peak there were more than 80 guests, some from as far away as West Africa and Brazil. I stopped giving the party in 2000. It had become too much work. But later that year, my mother died, following my father who passed 15 years earlier.

Since then, feeling a need for tradition, I've given other holiday parties, some even on New Year's Day. They've been wonderful. But none of them ever equal the joy of those early parties filled with ritual and feasting and family.

I was trying to think of the perfect holiday story to tell. Was it the 30-pound turkey that broke my oven shelves? My first Christmas in NYC, where I found myself completely alone watching "The Deer Hunter" with three 40s of Balantine's Ale? Perhaps it was the crew from Murray's Cheese's theoretical "White Christmas" where we planned on just doing coke and drinking Old Crow in response to pre-Christmas strife.

No. This is the tale of a stale turkey sandwich bought at a gas station, the only place open on Thanksgiving day, 1995 in a depressed coastal town in central Oregon. It was the fall of my first year in college. I had driven eight hours from Spokane, Wash., to meet my three best friends from high school, who had traveled the length of California to spend the holiday getting high and watching "Die Hard" in a tiny motel room in an ex-logging town by the sea.

Sometimes, I lose sight of the lesson learned in that dank room, smoking pot and eating sulfured turkey sandwiches: All the misguided energy spent trying to construct the perfect meal from the holiest of ingredients can't make up for cooking or eating with people you don't love and trust. You can have your baby greens and artisan salumi, but I'll take that nasty sandwich, and a few of my good friends, every time.

John T. Edge is the director of the Southern Foodways Alliance

Jessica is the author of 10 critically acclaimed cookbooks documenting the foods and foodways of the African Diaspora including: “Iron Pots & Wooden Spoons: Africa’s Gifts to New World Cooking,” “Sky Juice and Flying Fish: Traditional Caribbean Cooking,” “The Welcome Table: African American Heritage Cooking,” “Beyond Gumbo: Creole Fusion Food From the Atlantic Rim” and “The Martha’s Vineyard Table.” Jessica is working on “High on the Hog,” a narrative history of African American cuisine, to be published in 2010 as will her book on the rum culture of the Caribbean. Jessica has lectured on African-American foodways throughout the United States and abroad and has written extensively about the culture of Africa in the Americas. Jessica holds degrees from Bryn Mawr College, Queens College, Université de Nancy, France, and New York University. She is the inaugural scholar in residence in the Ray Charles Chair in African-American Material Culture at Dillard University in New Orleans, where she has established an Institute for the Study of Culinary Cultures. Jessica is also professor of English at Queens College, C.U.N.Y.