The best viral video of the decade

We came, we saw, we LOL'ed and WTF'ed 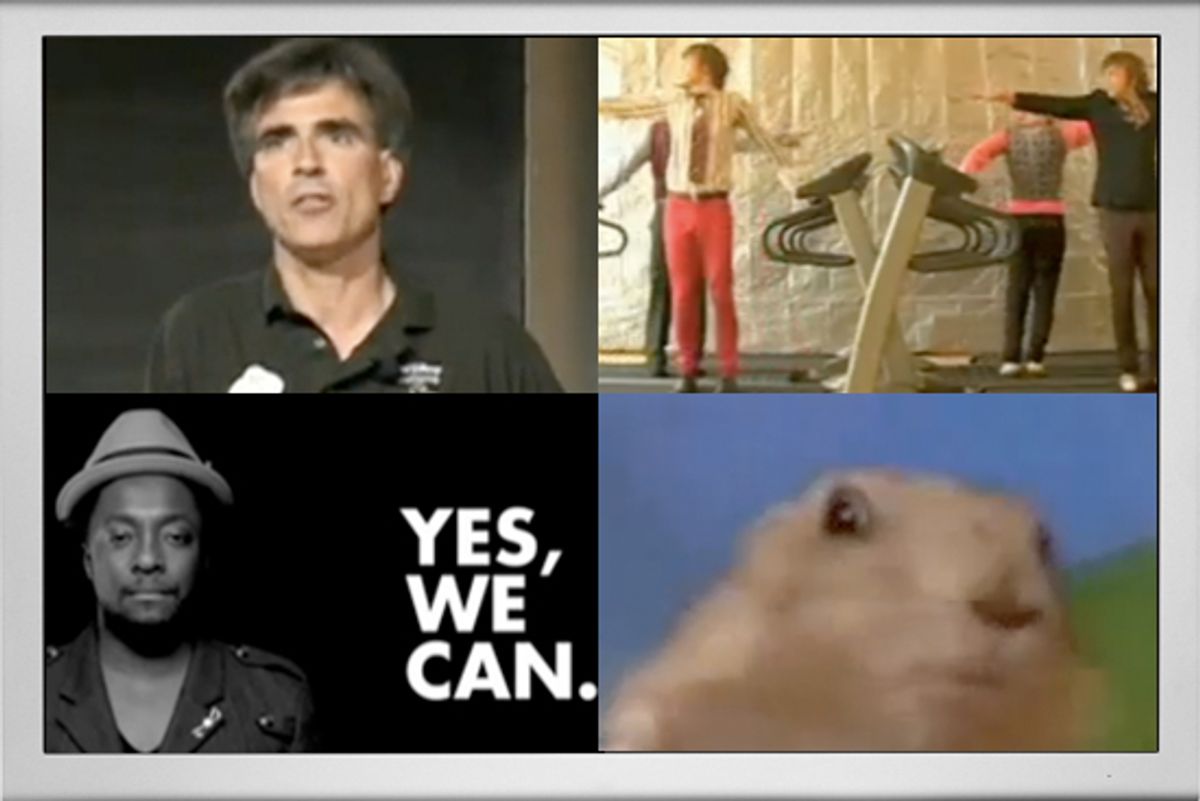 Long ago — the 90s — the word "viral" applied strictly to illness, and we had only an inkling of how awesome it is to dance at weddings, defy gravity and laugh at the funny things cats and toddlers do.

This decade changed that. Though we never want to hear words such as "Miss South Carolina," "inspirational comedian" or "Numa Numa" again, and while we sometimes wonder if those hours spent engrossed in "Planet Unicorn" were hours squandered, we fully cop to a deep, abiding love for viral video.

And what's not to love? It's a few moments of the crazy, the joyous and the jaw-dropping plopped into our daily grind, minutes made all the sweeter for their "You have GOT to see this" power to bring people together. These are the ones that made us click Replay again and again.

The CollegeHumor clip (that also goes, more precisely, by the name Dramatic Prairie Dog) wins hearts for conciseness. It's the ominous, clichéd moment plucked from every ominous, clichéd movie — only with a chipmunk! A punctuation mark of menace and adorableness boasting more narrative tension (and better acting) than an entire season of "Cougar Town," this may be the best five seconds in history.

Often imitated, never duplicated, those dancing, "Surfer Rosa"-referencing dorky indie rockers make us swoon. OK Go knew they were on to something when their charmingly choreographed, one-take video for "A Million Ways" took off on the then-fledgling YouTube back in 2005. But the following year, when the Chicago band hopped on a set of treadmills to the most aerobically infectious song in ages, music video broke free of MTV.

If you've ever wondered how utterly compelling it would be to shove a gun or Chuck Norris action figure into a blender and grind to kingdom come, the answer is — beyond your wildest dreams. Since 2006, Blendtec has been using our fascination with all things whirring and blade-riddled to sell what has got to be the most macho smoothie maker in creation. On behalf of all of us who've ever considered pulverizing our iPhones into smoking piles of ash, Tom Dickson, we salute you.

As a general rule, the whole "Let's drag an unsuspecting crowd into an episode of 'Glee'" trend makes us want to crawl under a table like a mortified birthday celebrant at an Applebee's.

Yet Jill and Kevin's 2009 nuptial procession, to the exuberant strains of Chris Brown's "Forever," is so unselfconsciously, romantically silly, it's easy to see why it became a sensation that even "The Office" wanted to emulate. The clip also set a new bar for how to go viral and make it count — nodding to Chris Brown's tarnished reputation, the newlyweds provided fans a link to contribute to the Sheila Wellstone Institute for domestic-violence prevention.

Forty years ago, a pair of Australian men bought a lion cub from a London department store, raised him, and released him into the African wild. A year later, they returned in search of their feline friend Christian. What unfolded next could have turned into the mauling of a lifetime. Instead, it became the most memorable reunion in man/wild carnivorous beast history. And when the clip surfaced decades later, a new and bigger than ever audience boggled all over again. The world may be radically different now than it was on that distant day in Kenya, but friendship — like Whitney Houston hitting a high C — goes on and on.

Even a few years ago, the idea of a mainstream star peddling his comedy wares on the Web was a novelty. But the Internet-fueled juggernaut of 2005's "Lazy Sunday," sealing Andy Samberg's reputation as stoner-cupcake icon, proved that laughter is more infectious than Ebola. So when Will Ferrell and Adam McKay launched the Funny or Die Web site in 2007, they did so with an appropriately uproarious bang. Featuring a potty-mouthed (if not potty-trained), verbally abusive, cute-as-a-button tyke shaking down her tenant for the rent, "The Landlord" was a filthy, so-wrong-it's-right instant hit. Since then a slew of A-listers have made their own Funny or Dies, and the site has helped comics like Salon sexiest man Zach Galifianakis break out. But the verbal sparring between debt delinquent Ferrell and the toughest 2-year-old in real estate remains the comic equivalent of Pearl's beloved four beers.

Advertisement:
The Landlord from Will Ferrell

You have not been owned until you've followed a link leading not to where the text suggested you were headed but to a 1987 music video from a deep-voiced, fresh-faced Brit. Why Rick Astley? Why "Never Gonna Give You Up"? Exactly. Getting rolled — or rolling another — is now as much a part of online life as accidentally stumbling on an image that even Urban Dictionary doesn't have a word for. As random as lottery numbers, as pointless as Glenn Beck, as ubiquitous as HPV, the April Fools' Day prank that keeps on giving is simple enough for a newbie to pull off, persistently easy to fall for, easily adapted, dumb, obvious — and still makes us laugh. It even effectively translates in real life. When Astley himself interrupted the 2008 Macy's Thanksgiving Parade to perform the song, it was the day the nerds officially took over popular culture. Hit the road, Rockettes. Hello, rolling.

In the fall of 2006, Carnegie Mellon professor Randy Pausch learned he had pancreatic cancer. He was given a fatal prognosis of death within a few months. A year later, he delivered a speech at the school titled "Really Achieving Your Childhood Dreams." The talk, part of series centered on the imperative of a hypothetical parting shot of wisdom, was in Pausch's case all too literal. Witty, inspiring and darkly frank, Pausch's Last Lecture opened with a PowerPoint CT scan of his tumors and featured plainspoken advice like, "The best gold is at the bottom of barrels of crap." Life, for all of us, is a terminal condition. Pausch, who died in July 2008, showed us how to stage its final act.

There are days when it seems our entire culture revolves around the word FAIL. So when our expectation of public embarrassment is thwarted, when a seemingly drab and inconsequential individual proves herself a star, that, my friends, is the meaning of EPIC WIN. They all laughed when Susan Boyle took the stage of "Britain's Got Talent" last spring — and then she opened her mouth. Boyle sang of heartache and longing with a voice that drew gasps from the audience and brought the world to its feet. And in the process, she reminded us that though we love to laugh when people fall on their faces, there's greater pleasure in seeing them soar.

Can a song make a difference? Can a video determine an election? And can three simple words change the course of history? Barack Obama didn't clinch the presidential election solely on the strength of will.i.am's soulful musical interpretation of a campaign rallying cry. Nevertheless, the celebrity-studded, black-and-white clip was a rapturous blend of one man's inspirational words and his supporters' simple, unvarnished optimism. Nearly two years later, its slow, hopeful crescendo still doesn't fail to produce chills — and a tear or two. When my grandchildren ask me someday what it was like to be there when the end of the Bush era was in sight, I'll show them this.

It would be unfair to put an Emmy-winning production by a beloved director on the same playing field as giggling babies, so we have to single out Joss Whedon's tuneful, stunning creation as a phenomenon unto itself.

Born out of creative frustration during the Writers Guild strike and featuring a supernaturally lovable cast, Whedon's small-budget, direct-to-Web opus damn near crashed the Internet when it rolled out as a three-day event in the summer of 2008. With Neil Patrick Harris as the titular aspiring super villain, Nathan Fillion as ego-driven Captain Hammer (whose fists, it turns out, are not the hammer), and Felicia Day as the dish who captivates them both, "Dr. Horrible" went on to become a multipronged sensation. It's "Rocky Horror" — the movie you watch at midnight screenings. It's "Guys and Dolls" — the beloved high school musical production. It's a comic book. It's the launching pad for a whole league of Evil League of Evil evil-doers. It's everything a great viral video should be — funny, poignant, full of dance numbers — and best of all, it makes you want to pull yourself away from the screen and make your own stuff. And then, you know, post it on YouTube.

Where the Hell Is Matt?

Best Of The Decade