I said: Bring me Filipina transgender hookers, opaque Jewish fables and class warfare! And here they are 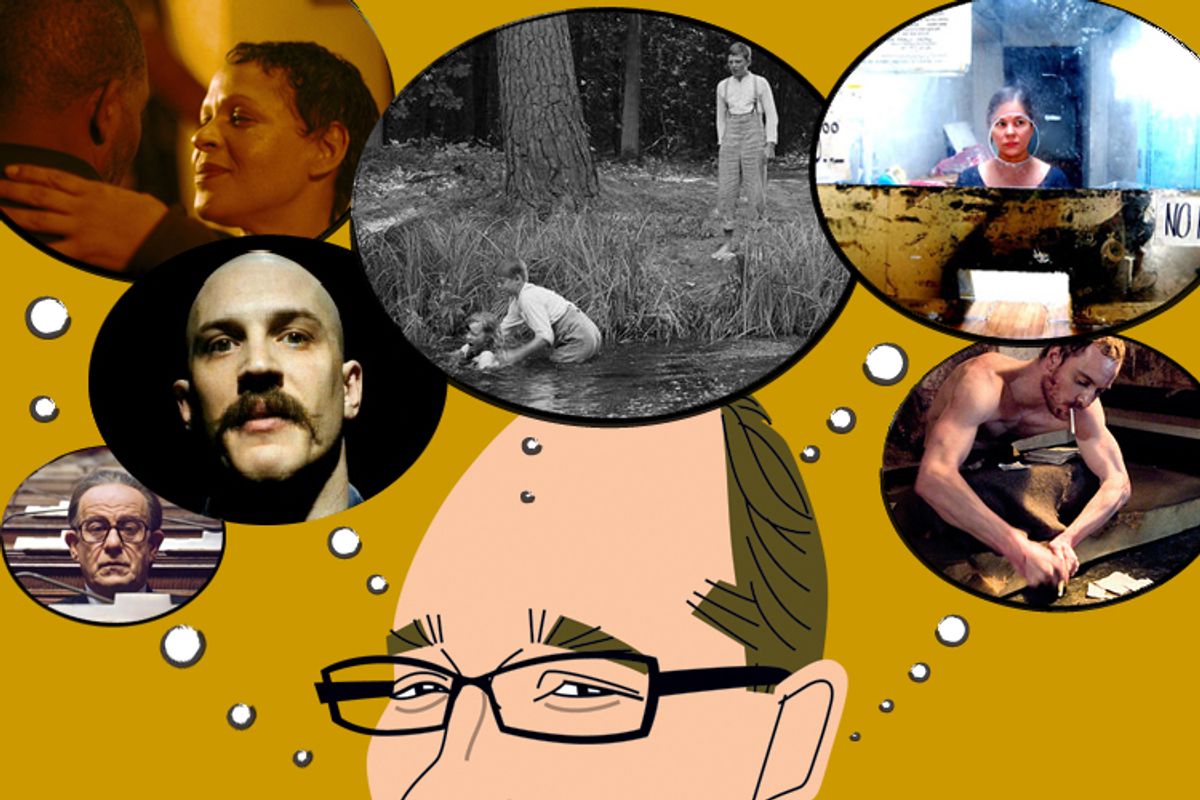 All I have to say about 2009 in film is that I'm sure they'll find movies to give those 10 best-picture Oscar nominations to, but it won't be any of the ones on my list. That's not a shocking development, but in this year of global recession, the distance between the massive pop-Hollywood spectacles and the little-noticed obscurities way out on the cultural margins seems to have widened into a yawning abyss.

Actually, though, this has been a pretty good year for the independent-film sector, at least in economic terms. I know, that goes against both perceptions and the headline news: the implosion of Miramax and the pseudo-indie, mid-budget bombs churned out by mini-major studios like Fox Searchlight (e.g., "Amelia" and "Whip It"). But it's true anyway.

"Paranormal Activity" took this year's Blair Witch Memorial Award for viral-marketed zero-budget hit — grossing well over $100 million to date — and "Precious: Based on the Novel 'Push' by Sapphire" has defied the film industry's cumulative demographic and marketing wisdom to the tune of $40 million or so. If the major studios' Indiewood specialty arms are dead or dying, old-fashioned film-festival acquisitions suddenly look like good business again.

My problem, which may be strictly my own, is that I found a lot of this year's indie hits to be predictable, formulaic and fundamentally uninteresting. The top-grossing foreign-language film of 2009, to date, is "Coco Before Chanel," a movie I saw and declined to review because it bored me too much. (Anne Fontaine is one of my favorite French directors, but I thought she was poorly matched to star Audrey Tautou and the orthodox biopic material.) Pedro Almodóvar's movie-movie noir "Broken Embraces" may wind up giving Fontaine's film a run for the money, but while I found many of the individual elements in "Broken Embraces" beautiful — the photography, the seriocomic tone, the central performances of Penélope Cruz and Lluís Homar — it never congealed into a satisfying whole. (I've been told to see it again, and I plan to.)

One major foreign release still lies ahead: Michael Haneke's austere black-and-white period piece "The White Ribbon," already winner of the Palme d'Or at Cannes and the best-film and best-director prizes at the European Film Awards. While it's a typically dark and enigmatic Haneke work that will surely attract some big-city viewers, it lacks the contemporary setting and the Lynchian combination of violence and mystery that made his "Caché" a surprise hit a few holiday seasons back.

One imported hit that I think is being oddly dismissed by so-called serious critics is Lone Scherfig's "An Education," a pitch-perfect pre-feminist coming-of-age fable that ought to make Carey Mulligan a movie star. It struck me as a lovely film with a depth of moral seriousness that's partly masked by its sets, costumes and charm — and I'm afraid that even in the year of Kathryn Bigelow's unexpected resurgence, "An Education" is the victim of some latent sexism.

As for Bigelow's "Hurt Locker," anointed by critics' groups from coast to coast as an Oscar front-runner, uh ... how can I put this? I liked it. I'm a Bigelow fan from way back to "Near Dark." Way worse things could happen than to see her on the stage of the Kodak Theatre clutching a statuette (and looking fabulous while her ex-husband glowers in the audience) come March. But "The Hurt Locker" just doesn't speak to me the way the films on this list do. It was terrific, visceral cinema — but I don't treasure the experience of seeing it, or yearn to repeat it. And let's face it: While the acting was excellent, the film's dialogue, what little there was of it, was Michael Bay-grade awful.

So what about the movies I did like? From the Hollywood-financial point of view, it's a whole lotta nothing. Only two movies on my list grossed more than $1 million in the United States — and only one of those made it past $2 million. I've got two films by American directors, only one of them made in the U.S. I swear, none of this was deliberate. I'm not consciously trying to come off like that snotty, unshaven alt-weekly critic from 1989, talking up Balkan-dialect movies nobody but him has ever seen. (I wasn't even that guy in 1989, or not exactly.)

I do think, however, that the aesthetic conservatism that dominates American cinema at the moment — expressed on the indie fringes by a talky, unadventurous and fatally dull strain of neorealism — has taken its toll on me. I'm like a junkie GI who's come home from Saigon and discovered to his dismay that the shit on the streets just ain't strong enough, man! Screw these movies where people with bad haircuts sit around and drone on about their relationships, humorously or otherwise! I want Filipina transgender hookers, imitation mid-'60s crime flicks, opaque Argentine class warfare, mean-spirited Jewish fables and the completely inappropriate glorification of violent British convicts! And here they are.

Seriously, though — I didn't put any movies on this list because I respected them. Fuck that for a game of darts, as my late Uncle Liam said on many occasions. These are the movies that dazzled me this year, that disoriented me and shifted my reality prism and messed with my head. If in most cases hardly anybody else saw them or liked them, if the great humming and coughing steamroller of defective late capitalism squished them flat without even noticing, that is strictly not my fault. Happy happies, everybody. I'll catch you on the flippety-flop.

"Hunger" — British visual artist Steve McQueen's debut feature, about the Bobby Sands-IRA hunger strikes of the early 1980s, is so implausible on so many levels it's a wonder it works at all. Straddling the boundary between narrative and experimental cinema, between pure visuals and talky drama, between Terrence Malick and, say, Sean O'Casey, "Hunger" is in fact one of the decade's true breakthroughs. Plus, people on all sides of the Irish-British debate disliked it, which suggests McQueen was doing something right.

"Bronson" — Another fact-based British drama that isn't anything like what you'd think when you hear that phrase. Nicolas Winding Refn's operatic, visionary work about the legendary, ultra-violent English convict who took the name Charlie Bronson shamelessly breaks all the rules and wears a pathological obsession with Kubrick's "Clockwork Orange" on its sleeve. I shouldn't rank it remotely this high, but I will anyway.

"Il Divo" — Rigorous, adventurous and explosive, Paolo Sorrentino's remarkable film takes the cinematic bravado of Martin Scorsese and the technical wizardry of David Fincher and applies them to the indecipherable story of Giulio Andreotti, the fabled "Black Pope" of 20th-century Italian politics. Part of the dazzling renaissance of Italian cinema, which may look sudden from here but has been brewing for a while. (See "Gomorrah," below.)

"A Serious Man" — I blow hot and cold on the Coens, but even their weaker films (e.g., "Burn After Reading," "The Ladykillers") reward repeat viewings — and their better films reward them even more. This utterly delicious black-comic Jewish fable, set in a middle-class Midwestern suburb in the '60s (a place that still carries buried undertones of Eastern European shtetl) is among their funniest and darkest films, both humane and ruthless in a way that's highly Coen-specific. As the last shot faded to black, I sat up in my seat and said, "Oh my fucking God!" Which is precisely right.

"The White Ribbon" — Michael Haneke's enigmatic and violent black-and-white yarn, set in rural Germany just before World War I, doesn't open until Dec. 30. I'll get to it then in more detail, but as is customary with the chilly Austrian-born director, "The White Ribbon" is a slippery fish. Ostensibly a parable about the roots of fascism, it's also a tale of faith, punishment, love and the petty cruelties of ordinary life. It's another of Haneke's unresolvable shaggy-dog mysteries, and simultaneously the most beautiful, most chilling and most forgiving of them.

"The Limits of Control" — People I know mostly either loved or hated Jim Jarmusch's stylish and surprisingly political twist on the '60s European crime film, driven by Spanish settings, Christopher Doyle's gorgeous photography and Isaach De Bankolé's iconic star presence and devastating wardrobe. Seriously, what's not to like? But then, I don't think this movie is about its conclusion (which some find dogmatic) or its reiterative-fragments-of-dialogue story. It's more like a Bach fugue, and it's about the moments, the silences, the faces and bodies and clothes, the endless cups of coffee. One of the indie pioneer's best ever.

"35 Shots of Rum" — With virtually no audience outside France, Claire Denis has become that nation's leading chronicler of social change and dislocation. This hushed, minimalist portrait of an Afro-French father and daughter on the Parisian fringes may be Denis' loveliest and most challenging film. "35 Shots of Rum" builds slowly toward an enormous emotional payoff, and along the way offers one of the most heartbreaking and unlikely uses of a pop song in film history (the song in question being the Commodores' "Night Shift").

"Gomorrah" — In adapting a nonfiction book by Roberto Saviano about the Camorra (or Neapolitan mafia), Italian director Matteo Garrone draws on his nation's rich cinematic history for this big-canvas social drama that invokes Antonioni, Fellini and Francis Coppola. A spectacular big-screen accomplishment, whose gorgeous bleakness is well-captured in a brand-new two-disc special edition DVD from the Criterion Collection.

"The Headless Woman" — Argentine director Lucrecia Martel's gorgeous and deeply troubling '70s class-warfare drama was booed at Cannes, which is way beyond ironic given its themes of blind privilege and willful ignorance. Martel tries to break through the language of conventional film and show us how her central character, an upper-middle-class blond woman (María Onetto), lapses into amnesia rather than face the consequences of her own borderline-criminal conduct. Like every other film on this list, "Headless Woman" compels a second viewing — and then compels you to recognize that it's shown you things you still don't understand. (Now available on DVD from Strand Releasing.)

Honorable mentions (alphabetical): Lars von Trier's bloody, beautiful and fatally insane "Antichrist" established, in case anyone was wondering, that he no longer has an American audience; Andrew Bujalski's "Beeswax" was ignored by both the hipster audience that used to like him and the grown-up audience that should; Almodóvar's "Broken Embraces," on which see above; Scherfig's "An Education," also discussed above; Terry Gilliam's gorgeous and daring "Imaginarium of Doctor Parnassus," with a wonderful last performance by Heath Ledger; Götz Spielmann's twisty Euro-noir "Revanche"; Carlos Reygadas' Mexican-Mennonite adultery drama "Silent Light"; Nina Paley's irrepressible (and uncopyrighted!) feminist take on the "Ramayana," "Sita Sings the Blues"; Pablo Larraín's demented Pinochet-era disco fable "Tony Manero"; Zack Snyder's brooding, black-comic "Watchmen."

Check in tomorrow for Andrew O'Hehir's picks for best movie of the decade.