Cause and effect in the "Terror War"

What sentiments do we think we're unleashing in the Muslim world from our still-escalating "five-front" war? 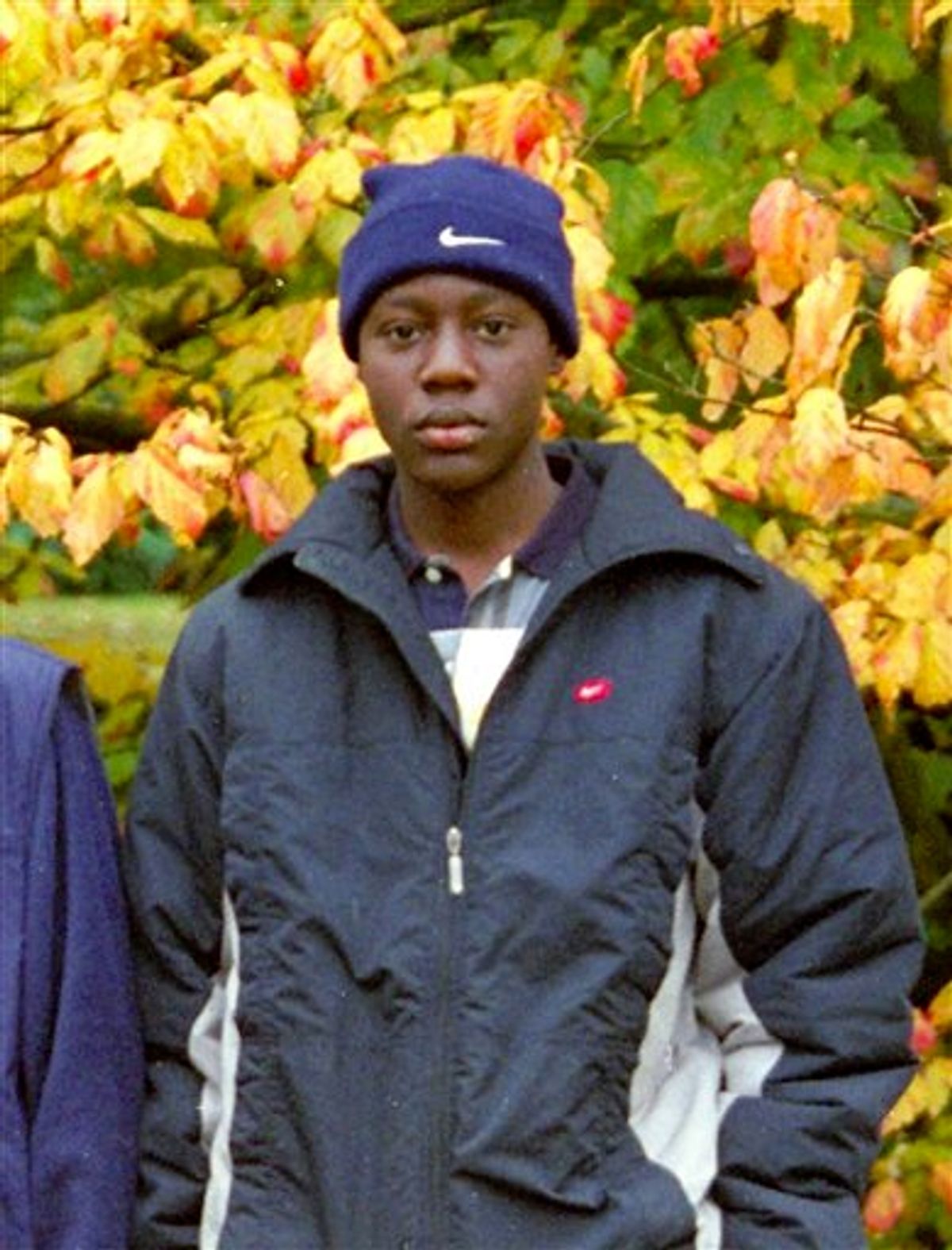 In this 2001 image made available on Monday Dec. 28, 2009 by teacher Mike Rimmer, Nigerian Umar Farouk Abdulmutallab poses with a group of fellow pupils from Lome's International School, Togo, while on a school trip to London. On Dec. 25, 2009 Abdulmutallab attempted to blow up an airliner over Detroit, an attack claimed to have been coordinated by Al-Qaida in the Arabian Peninsula, an alliance of militants based in Saudi Arabia and Yemen. (AP Photo) (AP)
--

"In all their alleged allegedness, this Administration has an allergy to the concept of war, and thus to the tools of war, including strategy and war aims" -- Supreme Tough Guy Warrior Mark Steyn, National Review, yesterday.

Actually, if you count our occupation of Iraq, our twice-escalated war in Afghanistan, our rapidly escalating bombing campaigns in Pakistan and Yemen, and various forms of covert war involvement in Somalia, one could reasonably say that we're fighting five different wars in Muslim countries -- or, to use the NYT's jargon, "five fronts" in the "Terror War" (Obama yesterday specifically mentioned Somalia and Yemen as places where, euphemistically, "we will continue to use every element of our national power").  Add to those five fronts the "crippling" sanctions on Iran many Democratic Party luminaries are now advocating, combined with the chest-besting threats from our Middle East client state that the next wars they fight against Muslims will be even "harsher" than the prior ones, and it's almost easier to count the Muslim countries we're not attacking or threatening than to count the ones we are.  Yet this still isn't enough for America's right-wing super-warriors, who accuse the five-front-war-President of "an allergy to the concept of war."

In the wake of the latest failed terrorist attack on Northwest Airlines, one can smell the excitement in the air -- that all-too-familiar, giddy, bipartisan climate that emerges in American media discourse whenever there's a new country we get to learn about so that we can explain why we're morally and strategically justified in bombing it some more.  "Yemen" is suddenly on every Serious Person's lips.  We spent the last month centrally involved to some secret degree in waging air attacks on that country -- including some that resulted in numerous civilian deaths -- but everyone now knows that this isn't enough and it's time to Get Really Serious and Do More.

For all the endless, exciting talk about the latest Terrorist attack, one issue is, as usual, conspicuously absent:  motive.  Why would a young Nigerian from a wealthy, well-connected family want to blow himself up on one of our airplanes along with 300 innocent people, and why would Saudi and Yemeni extremists want to enable him to do so?  When it comes to Terrorism, discussions of motive have been declared more or less taboo from the start because of the dishonest equation of motive discussions with justification -- as though understanding the reasons why X happens is to posit that X is legitimate and justifiable.  Causation simply is; it has nothing to do with issues of morality, blame, or justification.  Yet all that is generally permitted to be said in such situations is that Terrorists try to harm us because they're Evil, and we (of course) are not, and that's generally the end of the discussion.

Despite that taboo, evidence always ends up emerging on this question.  As numerous reports have indicated, the Al Qaeda group in the Arabian Peninsula has said that this attempted attack is in "retaliation" for the multiple, recent missile attacks on Yemen in which numerous innocent Muslim civilians were killed, as well as for the U.S.'s multi-faceted support for the not-exactly-democratic Yemeni government.  That is similar to reports that Nidal Hasan was motivated to attack Fort Hood because "he was upset at the killing of Muslims in Iraq and Afghanistan."  And one finds this quote from an anonymous Yemeni official tacked on to the end of this week's NYT article announcing the "widening terror war" in Yemen -- as though it's just an afterthought:

"The problem is that the involvement of the United States creates sympathy for Al Qaeda. The cooperation is necessary -- but there is no doubt that it has an effect for the common man. He sympathizes with Al Qaeda."

As always, the most confounding aspect of the reaction to the latest attempted terrorist episode is the professed confusion and self-righteous innocence that is universally expressed.  Whether justified or not, we are constantly delivering death to the Muslim world.  We do not see it very much, but they certainly do.  Again, independent of justification, what do we think is going to happen if we continuously invade, occupy and bomb Muslim countries and arm and enable others to do so?  Isn't it obvious that our five-front actions are going to cause at least some Muslims -- subjected to constant images of American troops in their world and dead Muslim civilians at our hands, even if unintended -- to want to return the violence?   Just look at the bloodthirsty sentiments unleashed among Americans even from a failed Terrorist attempt.  What sentiments do we think we're unleashing from a decade-long (and continuing and increasing) multi-front "war" in the Muslim war?

There very well may be some small number of individuals who are so blinded by religious extremism that they will be devoted to random violence against civilians no matter what we do, but we are constantly maximizing the pool of recruits and sympathy among the population on which they depend.  In other words, what we do constantly bolsters their efforts, and when we do, we always seem to move more in the direction of helping them even further.  Ultimately, we should ask ourselves:  if we drop more bombs on more Muslim countries, will there be fewer or more Muslims who want to blow up our airplanes and are willing to end their lives to do so?  That question really answers itself.