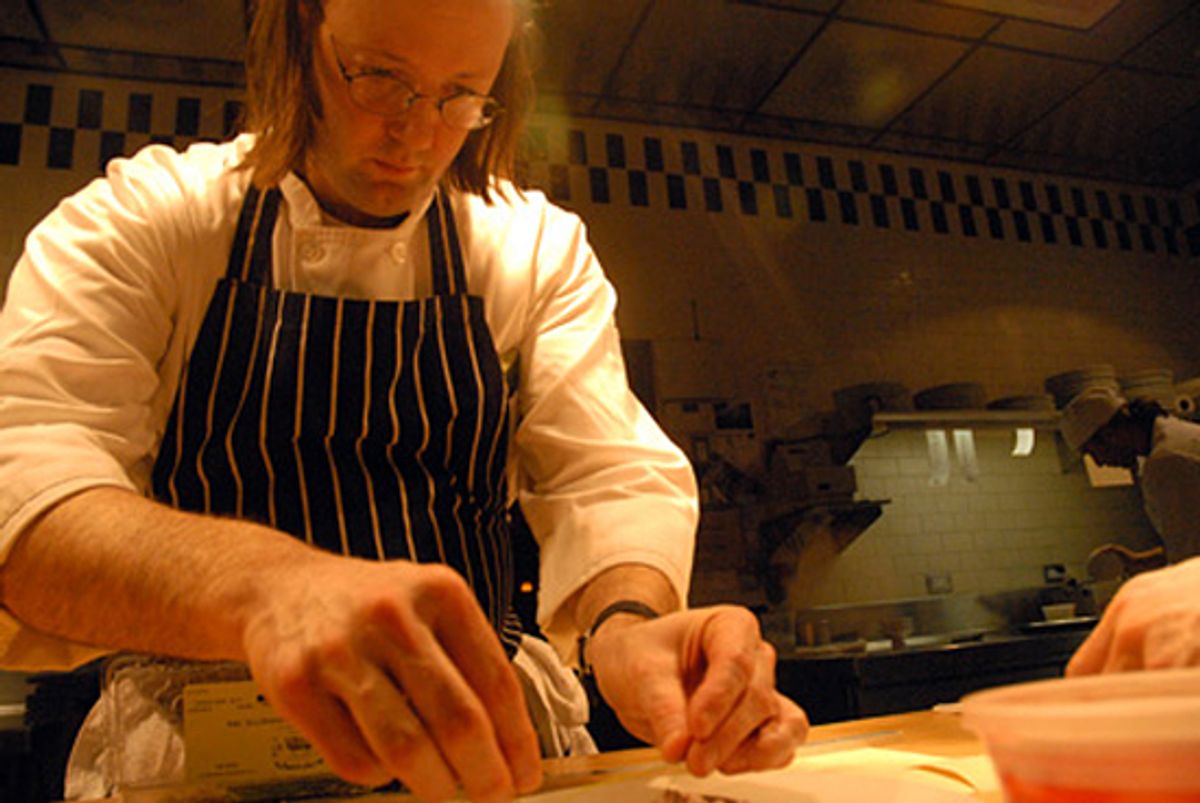 If writing about music is like dancing about architecture, then how do you talk about flavor? Inspired by "The Taste Makers," Raffi Khatchadourian's fascinating story in the New Yorker on the highly creative people who invent the flavors in your soda and candy, we're chatting with chefs on how they think about flavor in their work.

This installment: Wylie Dufresne of New York's wd-50, who years ago became known for serving oysters pounded flat into sheets and pairing venison tartare with soybean ice cream, talks to us about how he constructs the flavors of his dishes, the way novelty and memory taste, and growing out of his younger, rasher phase.

"The manufacture of flavors demands a childlike openness." That's a line from Khatchadourian's story, a paraphrase of Willy Wonka. Does that relate to how you think of your flavor combinations? Is there a process you go through when designing them?

I'm not always sure where inspiration comes from. My mother, who is very creative, always says, "Creativity isn't linear. You can't just sit down and decide to be creative." It can come from so many angles: what I had for dinner last night, the book I read, going to the museum. It might start with a technique. It can start with Alex [Stupak, wd-50's pastry chef] asking what fruit or vegetable would be good with a dessert he's working on.

There is a part that's calculated. There's a framework we use. We always have to balance the dish: sweetness, saltiness, bitterness, umami, sourness. Especially sourness. I got that from [working under] Jean-Georges Vongerichten, without a doubt. You always notice laser-sharp balance with acidity in his food. He's always preached that, so that's always one of our first questions. How do we give the dish some acidity?

For example, something we're working on now is langoustine with bay leaf granola and a preserved-lemon dust — no, that's too precious sounding — but like a cookie crumbled up into sand. This sand has all the complexities of the fruit. But the plate needs some juiciness or a sauce. We got a little stuck there.

To relax at home one night, I opened a Chinese cookbook I like, and it fell on a page on sesame seeds. So then I start thinking about tahini, maybe a black sesame tahini for the dish? There's a randomness there. I didn't open the book looking for inspiration, but now sesame is on my radar. That's how it works; sometimes you can't force it. But I tell all my cooks to jot down their ideas all the time, and to be open to them when you're away from work.

Rachel Hagen, the flavorist profiled in the story, talks about her plans to try slipping menthol into butterscotch, something she describes as being "interesting, that makes you think.'" What do you think qualifies a flavor as "interesting"? What flavor combinations make a person think?

We have inherent curiosity for the new. Granted, we're not necessarily going to create new flavors, we're not finding many new ingredients. The pantry doesn't really change, but the pairings and arrangements can change.

What we like to do is either something like eggs Benedict and present it in a way that turns it on its ear, [slow-cooked egg yolks with deep-fried hollandaise and Canadian-bacon crisps –Ed.] or we take seemingly disparate flavors and put them together.

In the article, they were tasting a citrus fruit and talking about finding notes of clove, Gouda cheese, yeast. Oh my god, that sounds great. Yeast, citrus and clove? That's a beginning of a dish right there. To me, that sounds very disparate, but to them, those are closely related elements, tied together by this fruit. Sometimes these flavors just need some contextualizing.

So what connects quails to bananas to tartar sauce?

You didn’t like that dish? That's OK. We shouldn't always agree on everything; that would be no fun. It all seemed logical when I tried it. You know, sometimes one's ego gets in the way and you go, "I don't care when people tell me I don't like it," but then you look back and see that it was a dog. But with that dish, I mean, David Chang liked it and that's all I need to know. [Laughs.]

There are a couple of things that Rachel Hagen does that intrigue me: She keeps paint chips in her office to help her memorize flavors, using the colors to symbolize a particular aroma. She also describes a scene while camping, and talks about wanting to "paint" that scene as a flavor combination. Do you translate flavor into other forms? Does flavor symbolize things to you?

That didn't seem weird to me. She was talking about pine and cedar for the woods, lemon for the sun, and vanilla for the fog. I don't know that I would be going to Gatlinburg, Tennessee, when I eat that, but could think of a walk in the woods or something.

We can eat something and trigger a memory. Heston [Blumental, of The Fat Duck, outside London] has a dish inspired by sweet shops of his youth, licorice and coconut. Those were not the flavors of my candy store, but it can still be transporting.

But you have to be a diner who wants to be transported, to bring that childlike openness to the table. You have to want to submit to the illusion. Think of when Grant [Achatz, of Alinea, in Chicago] burns leaves for his dishes. Some people might think of campfires, which is nice, and others might think of their neighbors burning their leaves on their lawn all the time, and it pisses them off.

People come up to me and say, "I know what you're trying to do! That was supposed to be like a hot dog!" And I think, "No, that's not what I was doing," but I don't want to squash what they're thinking. I like that I can't control that. It's great to have people have their own interpretation.

We've done that. We've done dishes that take all reference points away from people, sometimes to greater effect than others. But I hesitate to use the word "challenge," because I don't want to engage the diner too aggressively. In my youth, I did that too much. I hope I've matured in my approach to that. We've grown more comfortable, less showy for the sake of being showy. I like to be eating out of my comfort zone, but not everyone is like that. Not everyone wants to think about their food that way. Recognizing that is part of being a responsible restaurant.

I spent three hours at the Matthew Barney show at the Guggenheim Museum. I walked around really confused and dismayed, not sure what he was trying to tell me. I didn't feel like I could evaluate it, because I just didn't get it. And I guess that's something that some people experience at my restaurant.

I wasn't upset that I didn't get it. I was disappointed in myself. I think some people are prepared for that for certain art forms. But you don't have to go to a museum if you don't want to; you do have to eat.

I like the idea of having a couple dishes that are like, "Whoa, this doesn't make sense to me." But how does it taste? It's fun to go hog wild, but at the end, it has to taste good.