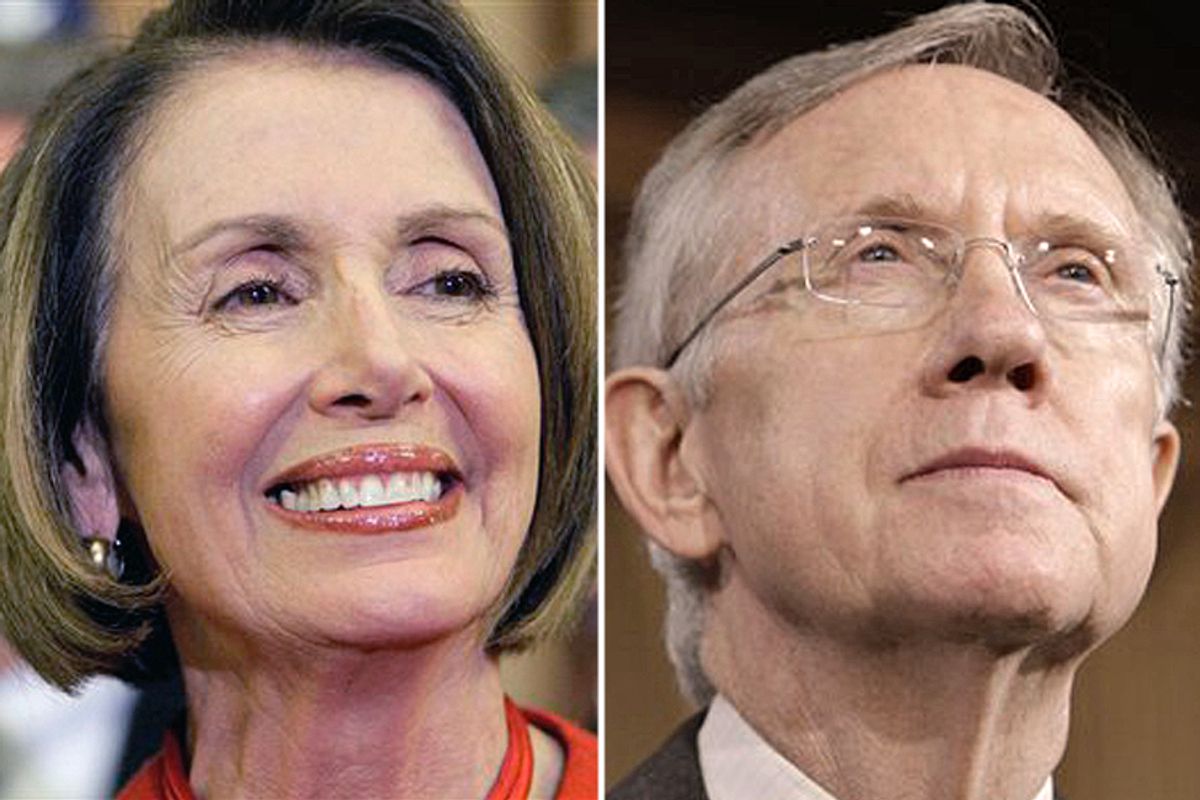 "Look, it is hard to look into the crystal ball 11 months from Election Day," Gibbs said. Hard -- and also, if you're a Democrat these days, a little scary. The surprising news Tuesday night that Sen. Byron Dorgan, D-N.D., wouldn't run again was followed not long afterward by the slightly less surprising news that his Connecticut counterpart Chris Dodd would join him in retirement. Colorado Gov. Bill Ritter announced his retirement, too, and just for good measure, Michigan Lt. Gov. John Cherry said he would sit out the 2010 election as well. Republicans and the media alike declared the sky was falling for the Obama administration and the Democratic Party.

"The real question is whether Harry Reid, now the Senate's most vulnerable Democrat, will follow Chris Dodd's lead and step aside," Republican National Committee Chairman Michael Steele said in a statement. (Take this one to Vegas, in Reid's home state -- he won't.)

Clear away the overheated rhetoric, though, and the reality in Washington looks a little different. Sure, Democrats will struggle in November's elections -- which they were already going to do anyway. The timing is bad, because all the retirement announcements stacked up on top of each other. So the "optics," as political operatives say, are terrible. But the Democrats aren't actually in substantially worse shape Wednesday than they were Monday.

Take Connecticut. Dodd may be a beloved member of the Senate Democratic caucus, but there was almost no way he was going to win another term. His ill-fated move to Iowa during the 2008 presidential primaries, his sweetheart mortgage deal from Countrywide and his work to enable AIG to issue bonuses despite billions of dollars in federal aid left him the most endangered incumbent senator in either party. Attorney General Richard Blumenthal, though, entered the campaign Wednesday with at least a 30 point lead over his GOP opponents, according to one poll taken before Dodd bowed out.

"Let's get real here," one Senate Democratic leadership aide told Salon. "We had a huge problem, and now it's gone."

With Blumenthal in much better shape than Dodd, the party won't have to devote anywhere near as much money to holding Connecticut as it might have otherwise. Buying ads in the state means buying ads on New York television; Democrats say the cash they'll save in Connecticut could help out in races in Ohio, Missouri or Kentucky.

North Dakota is a little different. Dorgan gave no advance warning to any of his colleagues (and barely any to his staff, informing aides by e-mail just before he announced his decision), and his departure doesn't relieve any pressure on the Democratic majority. But it's not entirely clear he would have won another term, anyway. There was persistent speculation Wednesday among Senate insiders that North Dakota's Republican Gov. John Hoeven had tipped Dorgan off over the holidays that he would get into the race, and that Dorgan opted out as a result. A poll taken just before Christmas showed Hoeven beating Dorgan easily. Of course, now the seat is a virtual lock for the GOP to pick up, even if Hoeven stays out, but Republicans might have won it no matter what. (Dorgan, for his part, said in his retirement announcement that he would have held on if he'd run.)

Colorado, where Ritter was deeply unpopular, may turn out to be better for the Democrats after Tuesday, as well. Interior Secretary Ken Salazar could run for the job, or Andrew Romanoff, who's challenging Democratic Sen. Michael Bennett in a primary, could switch to the governor's race.

Again, none of this means Democrats are eagerly awaiting the elections right now. Things were bound to be tough for the party that controls the White House, the House and the Senate during a midterm election, especially if the economy doesn't improve. But the map hasn't fundamentally changed, no matter what you hear on TV.