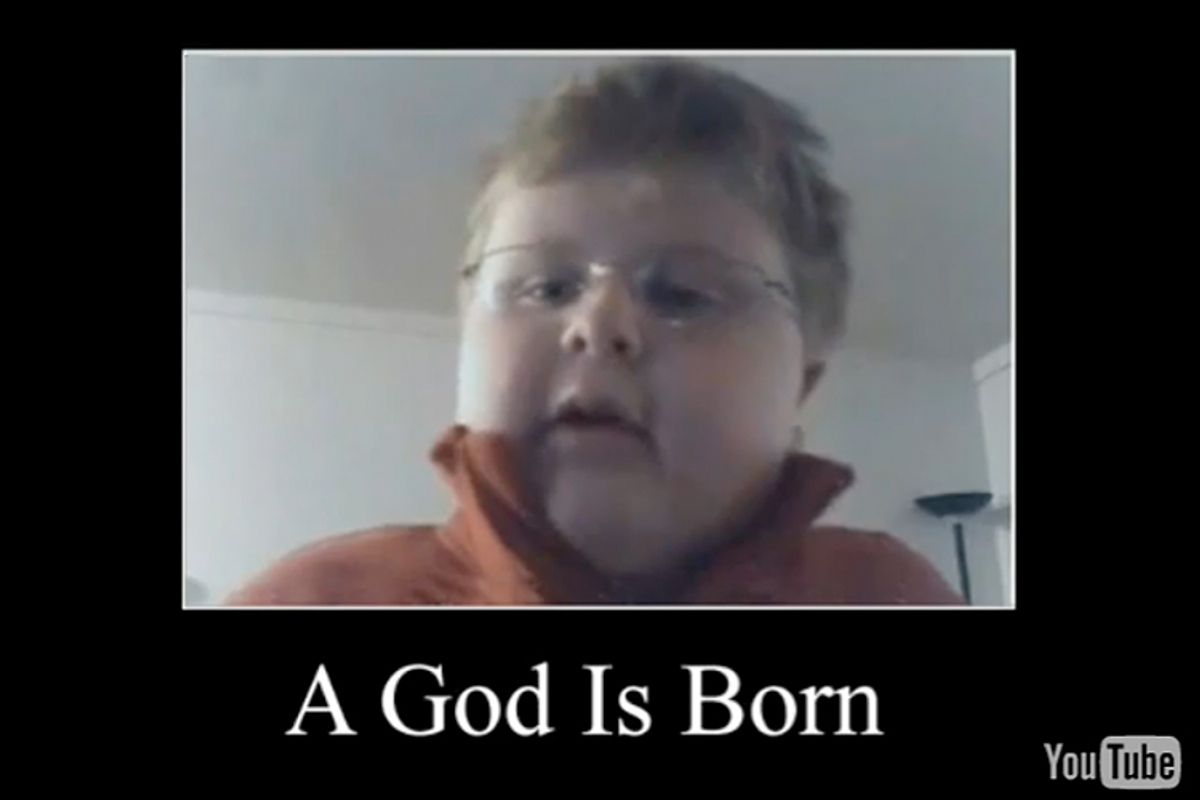 Lukeywes1234 is not the first star ever born on YouTube. He may not even be the strangest. But should you happen, today, to be searching for videos of sneezing kittens and instead find yourself gawking at people doing the nasty, you can chalk it up to a husky, bespectacled youngster and the rules-thumbing power of the Web community. Behold Lukeywes1234:

Mere days ago Luke was just another kid with a YouTube channel, a boy who likes "Star Wars," ghosts and, like so many people on the Internet, wearing tin foil hats. Then, for the same reason that Heidi Pratt is famous, which is to say, absolutely no reason at all, the anarchic image site 4chan (the pranksters who brought us such fabulous Internet nonsense as LOL cats and "Rickrolling") took a shine to Luke, encouraging its regulars to do likewise.

Suddenly old Lukey had a mess of new subscribers -- eventually topping out at over 15,000.

People were posting mashups of his videos and tributes to the kid. It was all classic, random YouTube idiocy. And then YouTube did something inexplicable: They yanked down Lukeywes1234's channel.

Now if there's one thing you should know about nerds, it's that they don't take too kindly to anyone smothering their self-expression. Lukeywes instantly passed from mere blip of the week into Internet legend. The tributes became more hyperbolic and Wagnerian.

Yes, it's really that juvenile. And yes, Luke's resemblance to YouTube folk heroes like the Star Wars kid and the Numa Numa guy, as well as the response that seems straight out of the great Boxxy eruption of 2009, makes the whole affair feel a little contrived. Much of the response to Luke is just an old-fashioned, bandwagon-jumping excuse to game the system, and there's an undeniable undercurrent of snark in the elevation of a guileless boy to YouTube "god." But in the midst of the attempted pornrolling (for what it's worth, I've been trawling YouTube all day for examples, and it's a lot easier to find real porn just about anywhere else) and faux outrage, there's a sweetness to the whole insanity as well. A boy puts up videos of himself, shot by his grandma, posturing as hero, and in the process actually becomes something of an unlikely hero. Why? Probably because, along with laughing at the amateurishness of the whole enterprise, people feel a real sense of fondness for a sweet kid goofing around with his computer. Perhaps they just like what one user summed up as Luke's "genuinely funny and lighthearted innocence." And sometimes -- in the bizarre convergence of 4chan's subversiveness and the fantasy play of a kid -- championing lighthearted innocence means sticking a money shot in a Jonas Brothers video.