Why not just boot Leno?

NBC considers moving back the brilliant, ratings-challenged O'Brien for Jay. Plus: Leno lameness up close 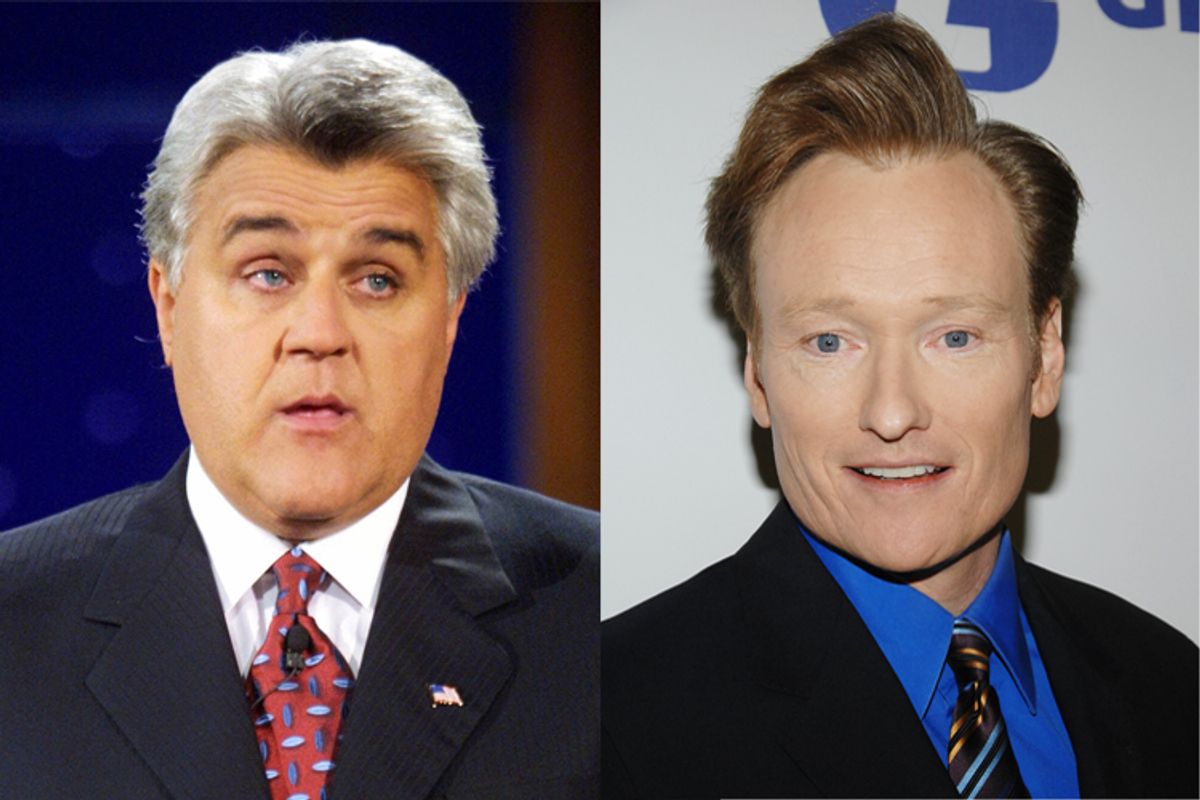 Has Jay Leno's move to primetime been bad for television -- or the worst thing ever for television? The most universally panned show since "Cop Rock" has, since its autumn debut, been a critical punching bag and a ratings disappointment. Nevertheless, Leno had generally been assumed untouchable. A show with timely, "DVR proof" content every night could skate by on relatively low viewership and still be a win for the network. Or so we thought.

Then Thursday, a storm of rumors about the fate of Leno's show – and, hot on its heels, that of the ratings-challenged Conan O'Brien -- broke out. Was NBC yanking Leno altogether? Sending him back to late night and ditching the infinitely more entertaining Conan? Or would it, as the current speculation goes, split the difference and cobble together a new late-night lineup featuring truncated versions of both shows? Thursday night, NBC issued the dry statement that they were "committed to keeping Conan O’Brien on NBC. He is a valued part of our late-night line-up, as he has been for more than 16 years and is one of the most respected entertainers on television.”

But saying they're committed to O'Brien doesn't mean they're keeping his show intact. Doesn't that sound a little less like "committed" and a little more like "downgraded"? Oh Conan, I've been in that relationship.

I admit I usually only catch Leno when it's forced upon me – it's a staple of New York City cab monitors that play a constant reel of  blather, turning that taxi ride back home into a mobile version of Guantanamo Bay. And watching Leno's show from the comfort of my couch last night, I remembered why I always avoided it.

In his monologue, Leno offered a quick attempt to dispatch the elephant in the room by making light of the hoopla. "As you may have heard, there is a rumor floating around that we were canceled. I heard it coming in this morning on the radio. So far, no one has said anything to me," he said, interesting given word I got from an entertainment journalist that he was in meetings with the network yesterday. "What does NBC stand for?" he cracked. "Never believe your contract." (It's a line eagle-eared bloggers noted had more sting the first time Leno reportedly used it – in 1992.) The network immediately and conspicuously promoted the routine as its "clip of the day."

It went downhill from there. Leno then moved on to a sketch about his shrill, silver-pompadoured family that was so excruciating I found myself longing for the George Lopez Show.

All of which leads to the question – why does a show so lame exist at all? Well, with one set, no actors and what often looks like no writers, it's so relatively cheap to produce it makes reality TV extravagant. It's also still influential. Leno's is the softest of softball venues, making it the go-to spot for a controversial celebrity; it's the place you go when a sit-down with Billy Bush might be too intense. After his now-infamous VMA rant, Kanye West had his first interview on Leno, and Chris Rock appeared last fall to drop a scathing, brilliant indictment of Roman Polanski. And because the show's also so desperate for content, Leno devotes a large portion of airtime to other comics, giving up-and-coming performers an almost unprecedented platform (would that such a magnanimous break were bestowed more often on worthier talent). So despite the show's mediocrity, as one well-known standup comic – who's done the late-night rounds many times -- told me yesterday, comedians "care about Leno because he's in primetime. Huge audience."

Huge to someone who can appreciate a shot at 10pm exposure, not so huge for what was to be a network's great hope. Is it just possible that not enough Americans – especially those in the desirable having-enough-money-to-buy-things demographic , require more of their evening's entertainment than Snookie from "Jersey Shore" ruminating on her New Year's Eve:

Or people singing about cupcakes?

So while the fate – and eventual time slot – of the show remain unknown today, NBC might do well to remember that if we want banality, we already have Twitter. If NBC does punt Leno back to late night, imagine the hijinx of a network scrambling to fill those five hours of primetime again, and the mirth coming from the direction of the other networks. Leno may never stop sucking, but the corporate flusterfest surrounding him may be the most amusing thing to happen to his show yet.