In defense of salt

NYC's war on sodium is a good idea, but here are reasons to still love salt -- and ways to use it judiciously 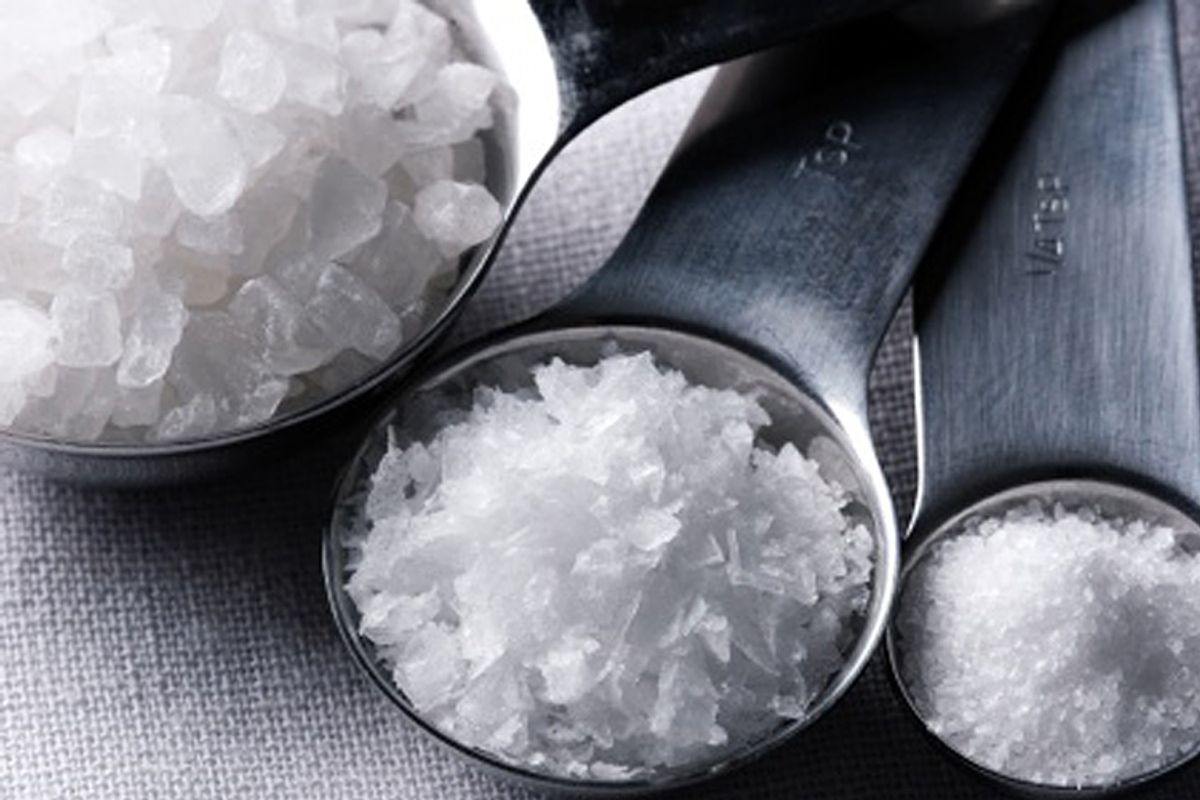 The last time I ate cheese that squirts from a can, the sodium pickled me from the insides; three days later I could still season food just by touching it. I can imagine how that's a bad thing. So, for the most part, I'm right there with New York City's new plan to encourage food manufacturers to use less salt, despite the considered cries of "nanny state" and "get your government hands off my Medicare." Look: Americans consume nearly twice the recommended dose of sodium, so something's got to give. But here's my rule: Don't be scared of the salt you use at home; be afraid when processed food makers are using it for you.

First, there's the fact that diets too low in sodium are dangerous themselves; we need salt to keep our fluid balances in check. Have you heard of "over-hydration," when marathon runners, say, collapse from drinking too much water? It's because their constant sweat depletes their salt levels.

Then, frankly more important, there's the flavor issue. In culinary school, there were two ways I could lose points before even touching any food: if I didn't have a dish of salt near me, and if I didn't have a pile of clean spoons, so I could taste, at every turn, if I'd seasoned my food enough. My chefs were maniacal about salt being one of the essential keys to deliciousness. Salt tastes good on its own, but its special power lies in the fact that, smartly used, it actually highlights the natural flavors of food. It turns your dinner from black-and-white to HD.

The key is to maximize the impact of the salt you do use. According to the Culinary Institute of America's "Techniques of Healthy Cooking" textbook (which, hilariously, we all called THC in school), "Salt is far more effective when it is added in small doses throughout the cooking process rather than just at the end [or at the table]. When added early, foods are in contact with the salt longer, which allows for deeper penetration and better flavor extraction."

So season in small doses, sprinkling a little on whenever a new ingredient goes in the pan, and taste it to see if you've added just enough to make the flavors pop. You don't need more than that. Out of curiosity, I actually measured the amount of salt I used cooking dinner last night. The result: about a teaspoon for three people -- right on target. (The recommended intake is about a teaspoon per person per day.) Also keep in mind that we taste salt more readily in cool or cold foods, so you can season even more lightly if the food is going to be served cold.

Salt also does magical things beyond flavor: According to Harold McGee's "On Food and Cooking," salt in boiling water for vegetables helps to soften them quicker, letting you cook them for a shorter period of time and preserving their nutrients; add enough salt -- 2 tablespoons per quart -- and you create an equilibrium so that the vegetables' nutrients won't leach to the water. (Two tablespoons might seem like a lot of sodium, but remember that most of it stays in the cooking water, not your food.) It tightens up the proteins in bread, giving it better rise; it helps vegetables ferment and pickle; it causes meat to soften and absorb moisture before cooking, making it tender and juicy.

Well, if you actually have hypertension, fine. But for the rest of us, note that in the New York Times piece on Bloomberg's sodium crusade, New York City's health commissioner says, "Eighty percent of the salt we eat is in the food already when you buy it".

I hate to throw you under the bus, dear Kraft -- you make unparalleled grilled cheese, and I'll admit that there's no better slice for cheeseburgers -- but let's be honest here. A slice of Kraft American cheese, at 21 grams, has 340 mg of sodium, or about 14 percent the recommended daily allowance. A similar quantity of real cheddar cheese has about 131 mg of sodium, or 5.25 percent the RDA, well less than half the sodium. (I've adjusted the serving sizes from the links to show apples to apples, er, cheese to pasteurized processed cheese food product.)

Where does all that extra sodium come from? Well, McGee explains how processed cheese "began as a kind of resolidified, long-keeping fondue made from the trimmings of genuine cheeses that were unsaleable due to partial defects and damage ... Today, manufacturers use a mixture of sodium citrate, sodium phosphates, and sodium polyphosphates" as the "melting salts," which combine and homogenize all those trimmings into one recognizable, eminently meltable mass. Yay science!

I hate to get all Michael Pollan on you, but at the end of the day, the sodium question is still about eating real food, and eating in moderation. These single-boogeyman approaches to being healthy are insane. We constantly compartmentalize and forget the bigger picture: that our bodies are complex machines that need all kinds of nutrient combinations, and, short of cyanide and low-fat mayonnaise, most anything we can eat has a place in the mix. So eat your delicious dinner. Just make sure you know who made it.