A lusterless show gets a goose from Mo'Nique, Jeff Bridges and the King of Bad Awards Speeches, James Cameron 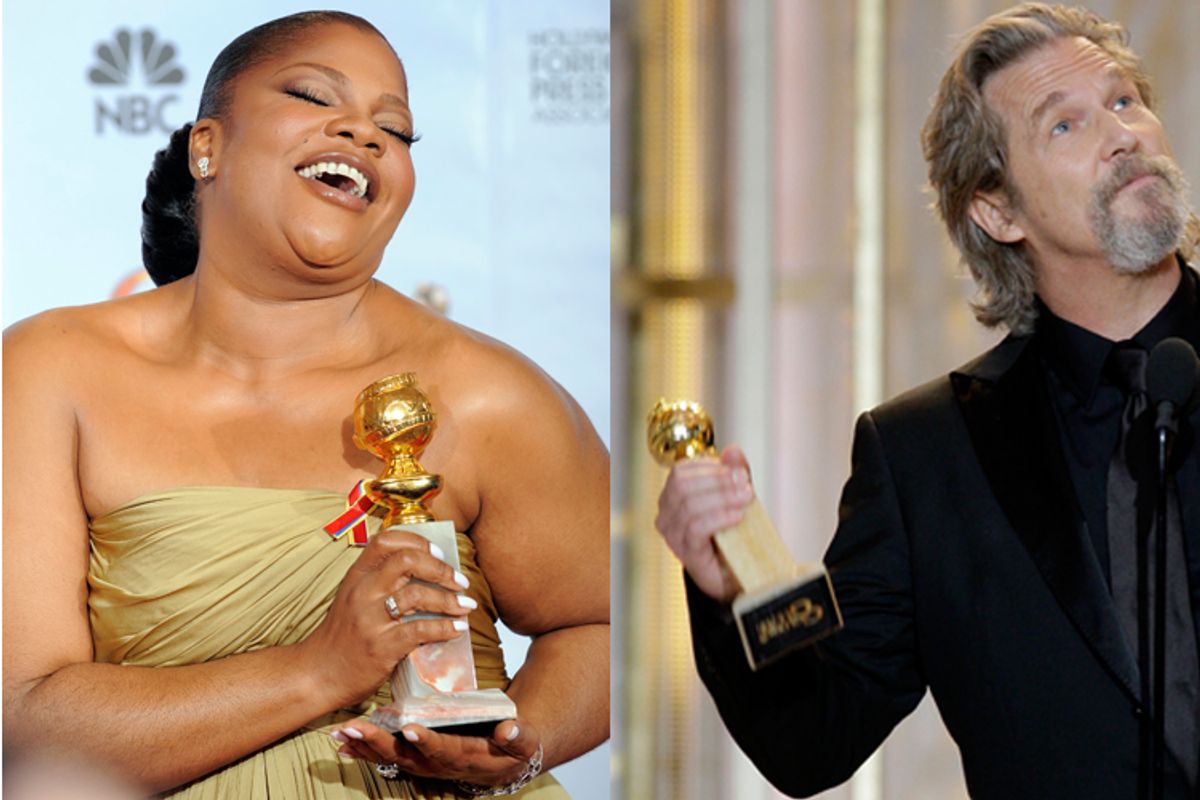 The Golden Globes is supposed to be the fun awards show, the Hollywood Foreign Press's loose, sexy and possibly drunk cousin to our stiff, self-congratulatory Oscars. The evening celebrates our twin obsessions of television and movies and does away with all those boring prizes for sound editing and whatnot. And this year, for the first time in 15 years, it even had a host, the wry Ricky Gervais.

But as if to prove that anything NBC touches these days is sprinkled with FAIL dust, this year's show did not delight. An air of despair hung over the proceedings, as entertainers in designer clothes paused from time to time to evoke (in their solemn, frozen, Botox-faced way) the recent devastation in Haiti. As proved by Ellen DeGeneres, who pulled off the impossible feat of hosting the Emmys with grace and warmth following the tragedies of 9/11 in 2001 and Katrina in 2005, it's possible to still dress up and entertain the world even on the heels of inconceivable sadness. It's necessary, even. But instead the Globes floundered awkwardly, unsure how to behave. And compounding the weird vibe was NBC's recent and highly public embarrassments. After a very gentle joke from Gervais about moving along before the network replaced him with Jay Leno, the show mostly steered well clear of the topic, the way your family does about Uncle Joe's DUI at Thanksgiving.

But there were moments nonetheless, authentic or just weird bursts of humanity that seemed to kick through the stiff, the strange and the surreal. You know, kind of like in a James Cameron movie. So in case you were watching "24" or simply passed out in boredom, let me break down the whole excruciating three hours into its 10 liveliest nuggets.

9. Paul McCartney, giving out the award for Best Animated Motion Picture and identifying himself as "the guy from Rock Band." As he dryly explained, "Animation is not just for children. They're also for adults who take drugs." He then announced the nominees by saying, "So let's take a look at the films nominated by drug-taking adults."

8. Michael C. Hall, who just last week revealed he's battling Hodgkin's lymphoma, humbly accepting the Best Actor in a Television Drama award for his role on "Dexter." Wearing a wooly black cap, he didn't acknowledge his condition, focusing instead on his gratitude toward his cast, crew and family. But the look on castmember (and fellow Golden Globe winner) John Lithgow's face said it all. It was two guys who'd won for playing psycho killers sharing a moment of mutual respect and grace.

7. Julianna Margulies, winning for Best Actress in a Television Drama for "The Good Wife," thanking CBS president and CEO Les Moonves and CBS Entertainment President Nina Tassler "for believing in the 10 o'clock drama." Pointed, funny, and dead on.

6. Well-placed ironic humor award of the night for the one-two punch of Gervais introducing the writing category as "a bit of a downer," followed shortly after by Samuel L. Jackson calling Best Picture nominee "Inglorious Basterds" "the feel-good movie of the year."

5. "The Hangover" beating out the dozen Meryl Streep movies it was up against to score one of the few surprises of the evening for Best Motion Picture Comedy or Musical. What's better than seeing Mike Tyson up on stage with the winners? Having all of them take their victory lap to the strains of the movie's poignant, tigers-and-crystal-meth-referencing ballad. Doug! Douggie Douggie Doug Doug!

4. New kid on the block "Glee" taking Best Television Comedy – and having the jubilant cast and crew gather behind creator Ryan Murphy, who said, "This is for anybody and everybody who got a wedgie in high school."

3. Jeff Bridges, laconic and low-key as ever, pulling an upset and winning Best Actor in a Drama for "Crazy Heart." And his response to getting a standing ovation: "You’re really screwing up my 'underappreciated' status here." Thanking his late father, actor Lloyd Bridges, for encouraging his kids to get into show business, Bridges explained: "'He said, 'Come on, it's fun, let's go!' So glad I listened to you, dad."

2. Ricky Gervais, late in the game, holding a beer and gleefully chalking up his lame-o performance to the beverage. But the kicker was him saying, "I like a drink as much as the next man, unless the next man … is Mel Gibson." Cue Mel Gibson, on hand to present the Best Director award.

1. James Cameron. Oh where to begin? Let's start with his Best Director win for "Avatar," inspiring a look of what certainly resembled pure, raw hatred on the face of "Up in the Air" co-writer and director Jason Reitman. (An expression Reitman wore again, only doubly so, when "Avatar" took Best Motion Picture Drama.) Remember 12 years ago, when Cameron looked like he was winning the award for World's Biggest Self-Loving Asshole with his Oscar night King of the World shtick? He almost avoided that this year, politely acknowledging his ex-wife and fellow nominee, "Hurt Locker" director Kathryn Bigelow, by saying she "richly deserved it." But then, the hubris kicked in. This time he thanked his peeps by saying "I see you" in – no, he wouldn't (oh God yes he did) – Na'vi. (Though borrowing from his own movie, Cameron instead called to mind another of the evening's winning films,"The Hangover," and Zach Galifianakis's cringeworthy "wolf pack" toast.)

But in case that wasn't gross enough, Cameron followed up during his win for Best Picture by encouraging an audience packed with the most pampered, highly compensated people in the universe to applaud themselves. The saving grace of the moment? Watching the camera cut to "Titanic" star Leonardo DiCaprio, who refused to do it.

At the beginning of the evening, Ricky Gervais made a crack about "the most important people on the planet: Actors, they're just better than ordinary people, aren't they?" Later on, Globe winner Robert Downey Jr. offered a contrarian,  "I don't have anybody to thank ... they needed me! 'Avatar' was going to take us to the cleaners!" In case you thought those were parodies of actual Hollywood thought processes, Cameron laid that right to rest.

Kudos to Kathryn Bigelow for smiling graciously through it all. One can only imagine what she was thinking, though it was probably a thought shared by many last night: "I may not have a billion dollars or Golden Globe, but at least I am not married t0 that raging dick up there."