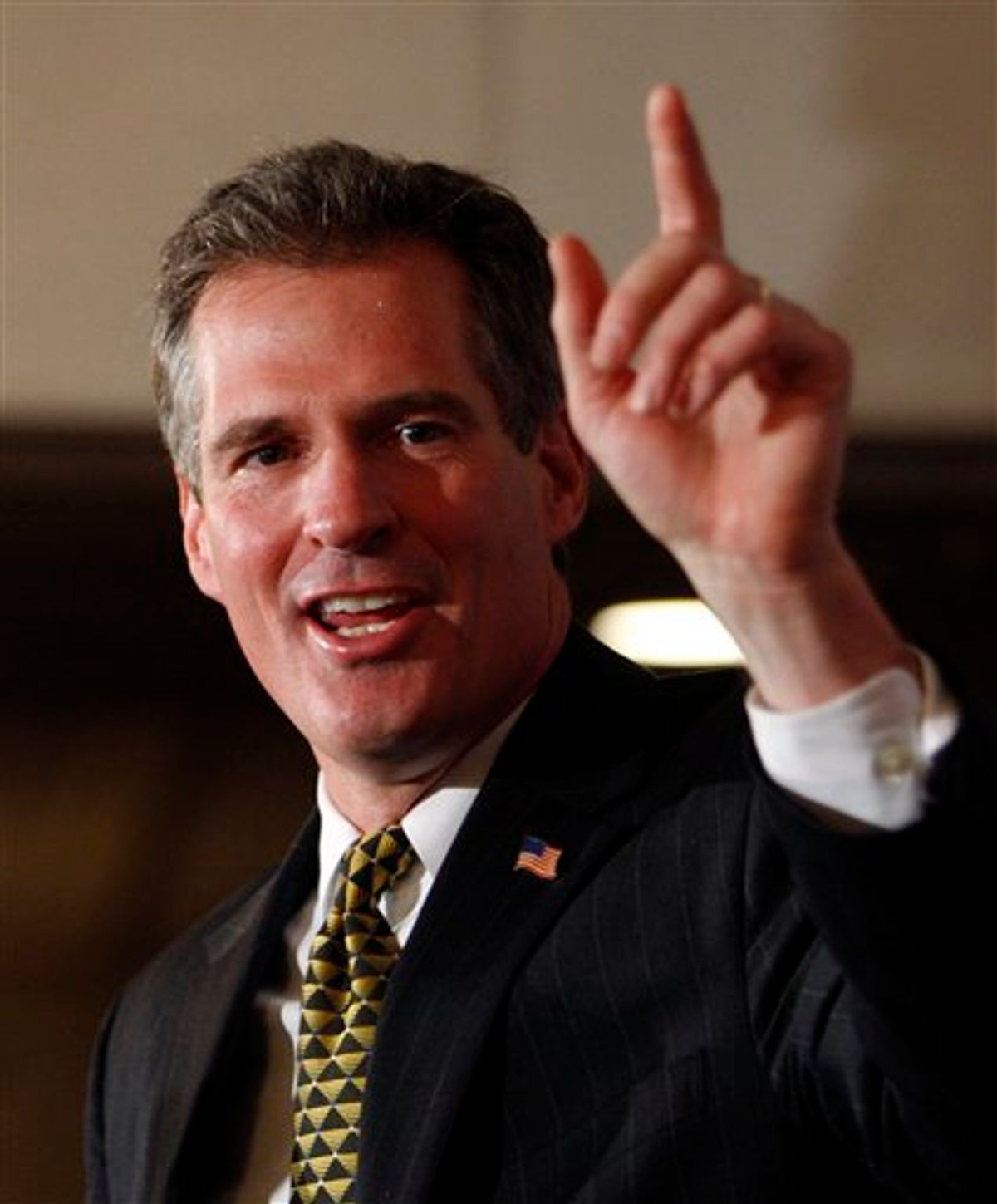 Massachusetts State Senator Scott Brown, R-Wrentham, speaks at a rally in Wrentham, Mass., Monday, Jan. 18, 2010. Brown is running against Democrat Martha Coakley and Joseph Kennedy, a Libertarian who is running as an independent, in a special election to fill the U.S. Senate seat left empty by the death of Sen. Edward M. Kennedy, D-Mass. (AP Photo/Robert F. Bukaty) (AP)
--

Many Democrats, as always, are caught in their insular liberal information loop. They think the polls are bad simply because the economy is bad. They tell each other health care is unpopular because the people aren’t sophisticated enough to understand it. Some believe they can still pass health care even if their candidate, Martha Coakley, loses the Senate race in Massachusetts on Tuesday.

That, of course, would be political suicide. It would be the act of a party so arrogant, elitist and contemptuous of popular wisdom that it would not deserve to govern. Marie Antoinette would applaud, but voters would rage.

The American people are not always right, but their basic sense of equilibrium is worthy of the profoundest respect.

Here we have one of the most common and manipulative tools of the political class:  pretending to care about public opinion only when it's consistent with one's own views (it's "worthy of the profoundest respect"), and disregarding it as the irrelevant bile of the ignorant rabble when it's not.

I remember another policy that was even more unpopular with the "Ameican people" than Obama's health care plan.  It was called the Iraq War.  Throughout 2006 and 2007, overwhelming majorities of Americans were not only opposed to the war, but favored a quick timetable for withdrawal.  So intense was the opposition that the Republicans suffered one of the century's most thorough and humiliating midterm election defeats in 2006.  Yet there was David Brooks writing column after column demanding that public opinion be ignored, mocking withdrawal as deeply Unserious, advocating continued occupation, insisting that the superior wisdom of a select elite govern our policy rather than ignorant mass sentiment.  Brooks and his neoconservative friends wanted to keep sending other Americans (but never themselves) off to that war to die even though only a small minority of citizens supported it.  Marie Antoinette indeed. Opposition to Bush's surge was particularly intense -- close to 70% -- yet Brooks was heaping praise on John McCain for ignoring public opinion and supporting Bush's plan ("when the Iraq war was at its worst, and other candidates were hiding in the grass waiting to see how things would turn out, McCain championed the surge . . . . He did it knowing that it would cost him his media-darling status and probably the presidency.  But for years he had hated the way the war was being fought. And when the opportunity to change it came, the only honorable course was to try").

If the Washington Establishment is adept at anything, it is ignoring and marginalizing public opinion.  That bothers very few of its members, least of all David Brooks.  Here was Brooks, in the midst of the deeply unpopular Wall Street bailout, celebrating the return of rule by "a cohesive financial establishment" that "does not rely on any system of checks and balances, but on the wisdom and public spiritedness of those in charge" and which "will turn to the safe heads from the investment banks":  "We’re entering an era of the educated establishment, in which government acts to create a stable -- and often oligarchic -- framework for capitalist endeavor."  The man who yearns for oligarchical rule by good-natured "heads from the investment banks" today parades around as the defender of public opinion.  And most ironically, when the reform plan ostensibly included one of the most popular aspects of health care reform -- the public option -- it was deemed too "liberal" and fringe by the likes of David Brooks, and it was therefore jettisoned.  How come during the public option debate we weren't hearing from Brooks about how the sentiments of Americans are "worthy of the profoundest respect"?

As he typically does, Brooks is just inventing facts about public opinion.  There's no evidence that views about health care reform have driven the Massachusetts race, and Brooks offers none.  That's a common trick he and his pundit-comrades use:  they simply assert that public opinion is consistent with their own views without citing any evidence.  But the larger deceit is the pretense that American public opinion matters.  There may be good arguments about why this health care reform bill should be abandoned, but when it comes to the desire of people like David Brooks to block efforts to expand health care coverage, public opinion is -- as always -- the absolute last thing that matters.  The opinion of the masses is just a prop they cynically wave around whenever it can prettify their desires with democratic packaging.