John Edwards may have lost his political career but he has a shot at something else: Redemption 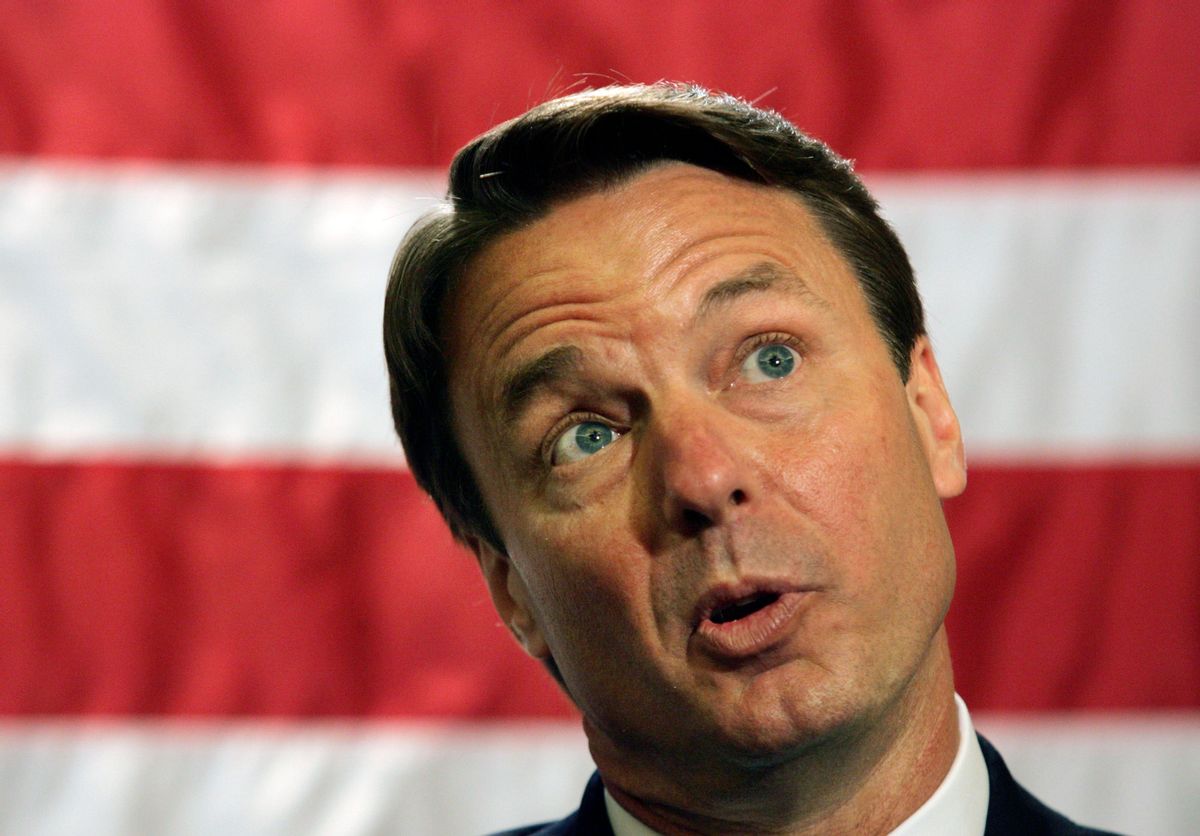 It's all about the falsehoods we tell ourselves. The way we justify our darkest secrets, the way we charge though the day, smiling, hiding. Sometimes it's as simple as lying, "I'm fine," when someone asks how we're doing. And sometimes it's impregnating your mistress during your presidential bid while your wife has cancer.

In the annals of spectacular, delusional hubris, John Edwards is the man who makes Tiger Woods look as coolly rational as Rene Descartes. Edwards, who at one point looked like the Democrat to beat – a crowd-pleasing, populist Southern gentleman competing against a woman and a black guy? Come on! – has become instead one of the greatest political failures of modern times.

Now today, nearly two years after being dragged into an admission of his his affair with campaign aide Rielle Hunter, the "ego monster" ex-senator finally admitted paternity of her daughter, Quinn. "I am Quinn's father," he said in a statement. He also confirmed what the National Enquirer first reported, admitting, "I have been providing financial support for Quinn and have reached an agreement with her mother to continue providing support in the future." It was an abrupt about-face from a man who so memorably told "Nightline," "I know it's not possible that this child could be mine."

Self-deception, by the way, seems to be a theme in the Edwards marriage, evidenced so nakedly when Elizabeth appeared on "Oprah" last year and not only refused to say Rielle Hunter's name but referred to the woman's child as "It."

"I can't see any upside to making it a part of my life," she said.

Of course, all of John Edwards' delusions, all his pomposity, all the things that made his tumble from grace so fast and steep – they're all part of being human. Show me someone who hasn't floated down the river of personal denial at one time or another and I'll show you someone who's still learning to crawl and digest solid food. Few of us flame out in quite so grand a fashion as the fallen senator, but every one of us has stomped on someone closest to us at one time or another and told ourselves it was OK. We've all broken promises and hearts. The best any of us can ever do is butch up and own up to our failings, try to have fewer of them next time. All of that I can understand.

But here's where my sympathy breaks: Flat-out denying the existence of your own kid? Especially when you're already a father, a father who's lost a child, even? Who does that?

I spring from the loins of a man who skipped out before I was born, and, trust me, there's nothing like knowing your father decided his obligations ended at the moment of conception to do a permanent number on you. At least my dad didn't call the whole thing "false, completely untrue and ridiculous" on national television while running for the highest office in the land. And lest you think we live in more enlightened times now than when my mother was the village pariah, good luck to Quinn in outrunning the "bastard" label that will likely stick to her for the rest of her life.

Two-year-old Quinn Hunter is not an "it," or a late-night punch line; she's a person, and she deserves better than an Arthur Dimmesdale dad and the label of "bastard." That's why, maybe, in the whole painful public wreckage of all this, there's a glimmer of redemption. A wise friend once told me, the thing about living in America is that you can have anything you want -- you just can't have everything you want. Edwards thought -- crazily, we now know -- that he could be the leader of the free world and have his Rielle Hunter-flavored cake at the same time. He then thought he could confess to an affair and deny the consequence of it. That doesn't appear to have been mere arrogance; it looks an awful lot like tragic, warped, unshakeable belief. He's come somewhat to his senses now, a day late and many dollars short, but it's still more than a lot of us ever get.

Edwards said today, "It was wrong for me ever to deny she was my daughter and hopefully one day, when she understands, she will forgive me." She may never understand. I won't. But when he says, "I will do everything in my power to provide her with the love and support she deserves," it's a start. By trying to have it all and blowing it, Edwards lost the political career and the hopes he may have genuinely harbored to change the world. But now he has a shot at becoming someone truly important: a little girl's father.