Restaurant critics stare into the abyss

With Yelp and an infinite number of food blogs, do you care what the professionals have to say? 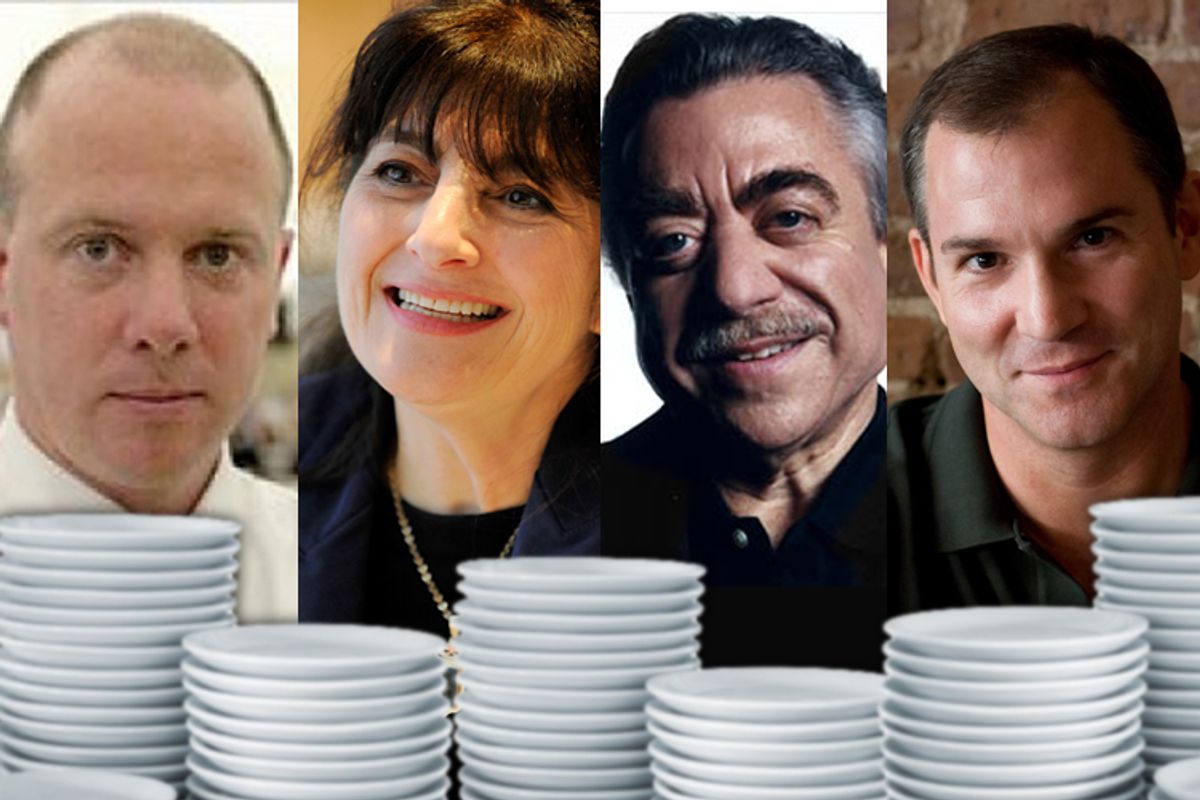 Pity the poor restaurant critic. Sure, they dine every night at the finest tables, someone else picks up the tab, and they call it work. But imagine being in their shoes, working in the age of yelp.com and where everyone and their sister has a food blog telling you about where they had dinner last night. Wouldn't you feel a little bit like your profession is just staring into the abyss, waiting for someone to give you a push? (I was a writer for a magazine printed on dead trees. I know that feeling well.) A panel at New York University last week discussed the viability and purpose of professional restaurant critics, and the differences of views were stark.

Alan Richman, of GQ magazine and the most decorated food writer known to man, thinks the jig is up: Though he ripped his trademark witticisms, his eyes grew sad under his bushy eyebrows as he lamented the loss of detailed, crafted reviews in favor of "something like my blog posts, which I have to finish in half a day." Critics can no longer "appeal to a higher authority," he says, and find it difficult to be "constantly attacked." "Every time I write something, hundreds of people call me an asshole," he said, though to be frank I thought I also detected a hint of pride in that statement.

Mitchell Davis, the vice-president of the James Beard Foundation, expanded the thought: "We have a very different relationship to authority. In the 1960s, Craig Claiborne [the New York Times' first critic] could 'educate' his readers. But now we're a bit different. We're democratizing everything. If anyone can be president, why can't we all be critics?"

I wondered about that, and I can't help feeling that it's because we view restaurant critics very differently than cultural critics, the best of whom don't concern themselves simply with whether or not you should shell out for that movie, say, but who bring thoughtfulness and perspective to their subjects, who challenge our interpretations and assumptions and create a larger dialogue not just of the film, but around it. We invest in them a sense of authority that we appreciate and don't begrudge.

Though the best restaurant critics have entertained and transported us through their descriptions and narratives, it seems to me that for the most part today, people read restaurant reviews because they want to know if they should eat there, what dishes are good, and how much it'll cost. If you just assembled a chart with that information on it, maybe with a dash of snark, most people would be perfectly happy with it. (And if you quantify it, all the better: Just look at the pre-Internet dominance of the Zagat guides, and now, of course, at Yelp.)

The popularity of user-generated-review Web sites, such as yelp.com, means the restaurant reviews and food discourse increase exponentially by the day ... [but there is still a] continued dominance of elite media in matters of opinion making about food, chefs, and restaurants. Traditional restaurant reviews, especially those in the New York Times, continue to exert a significant influence on taste that is demonstrated in a number of different ways, such as the similarity of the rankings of top restaurants across media outlets, including consumer plebiscites, such as Zagat Survey, expert-driven tribunals, such as the Michelin guide, and even user-generated review Web sites, such as yelp.com, which at times appears to be nothing more than a sounding board for consumer reaction to the opinions expressed by the Times. Now, more than ever, a favorable Times review is what chefs and restaurateurs are hoping for, whether their restaurants are located in New York City, or not ... [T]he overwhelming amount of information of unknowable origin available online, which makes the opinions expressed in traditional reviews written with an adherence to journalistic ethics seem more trustworthy.

So here's a question for you: Do you read professional restaurant critics, and if so, do you read them for information on where to go and what to eat, or for some other reason? Help me think this through!