The dictionary: Too hot for fourth grade! 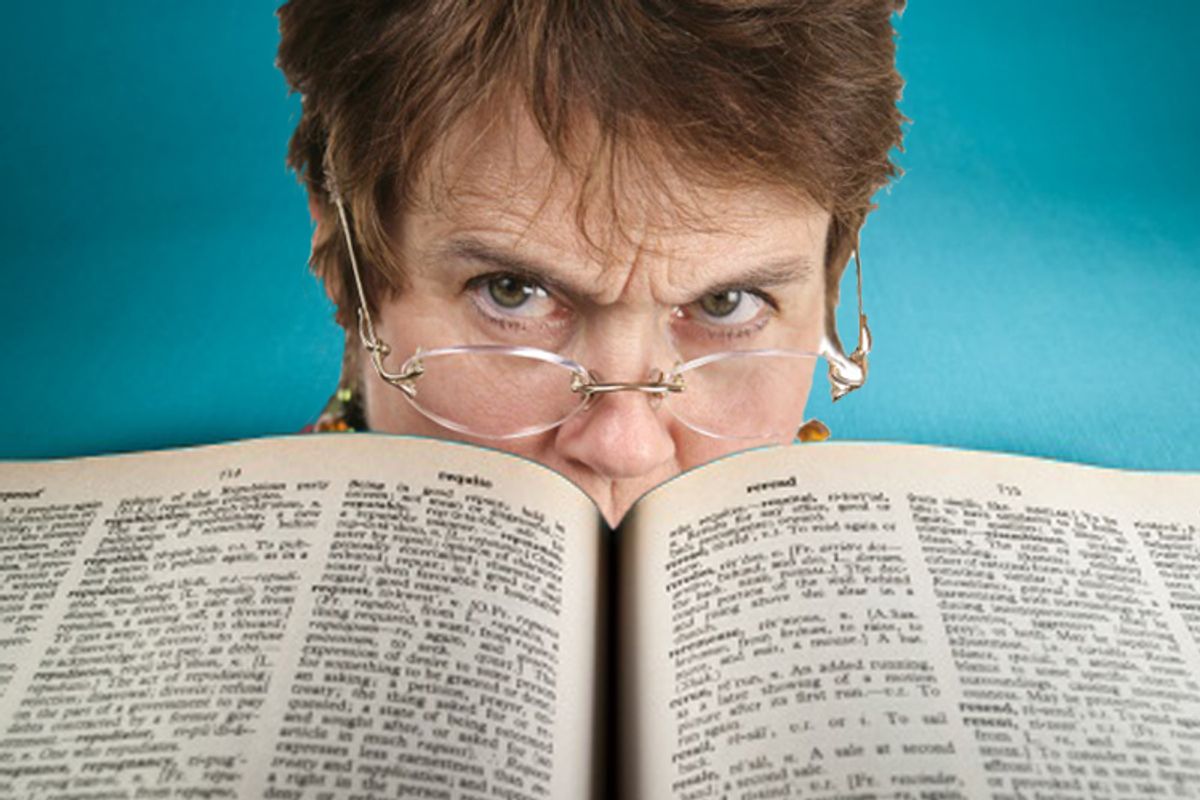 Those kid these days! With their sexting and their pregnancy pacts and their dirty book reading. I mean, Jesus, have you taken a look at this thing called Merriam-Webster's 10th edition? It's like an R. Kelly album.

Fortunately, the folks at Southern California's Menifee Union school district have taken steps to protect their children's innocent eyes from sexually explicit materials. Acting on a complaint from one parent after she noticed that the dictionary in her son's Oak Meadows Elementary School contained the phrase "oral sex," swift-acting school officials pulled the salacious work from fourth- and fifth-grade classrooms throughout the district.

District spokeswoman Betti Cadmus told Southwest Riverside News that after the mother complained to the school principal, the district decided to temporary remove the books. "We are grateful that the parent who saw something sexually graphic brought it to our attention," she explained. The district will now form a committee to "determine the extent to which the challenged material supports the curriculum, the educational appropriateness of the material, and its suitability for the age level of the student." That's right -- in certain places, one cranky parent can get the dictionary removed from an entire district's schools, even when the kids themselves haven't been running around blurting about ORAL SEX to their elders.

Speaking to the Press-Enterprise about the dictionary ban, Betti Cadmus explained, "It's just not age-appropriate. It's hard to sit and read the dictionary, but we'll be looking to find other things of a graphic nature."  For a tome that runs from "a" to "zymosan," that might take a while.

Sure, there are other, less salacious dictionaries than that freaky Merriam Webster's 10th. There are even newer ones, which benefit from boasting fresher terms like "frenemy" and "smackdown." But it only takes a quick leafing through a book that has 1,560 pages full of words to give one a deep appreciation for how powerful, beautiful and special the English language is, how varied in its orgins, how rich and colorful in its history. And though that language also contains terms that have cruder and more sexually explicit meanings, I can't think of too many places I'd prefer my own fourth grader to learn their correct meaning and origin than a good dictionary.  In fact, the more words in that book my kid knows -- even the vulgar ones -- the happier I am, because every one of them makes her better equipped  to articulate her own thoughts. Nobody ever gained anything from knowing less. And when she needs a word for "Menifee Union school district," she can find it right on page 345: doofuses.