It was controversial when Bush imprisoned foreign nationals without charges; what about killing U.S. citizens? 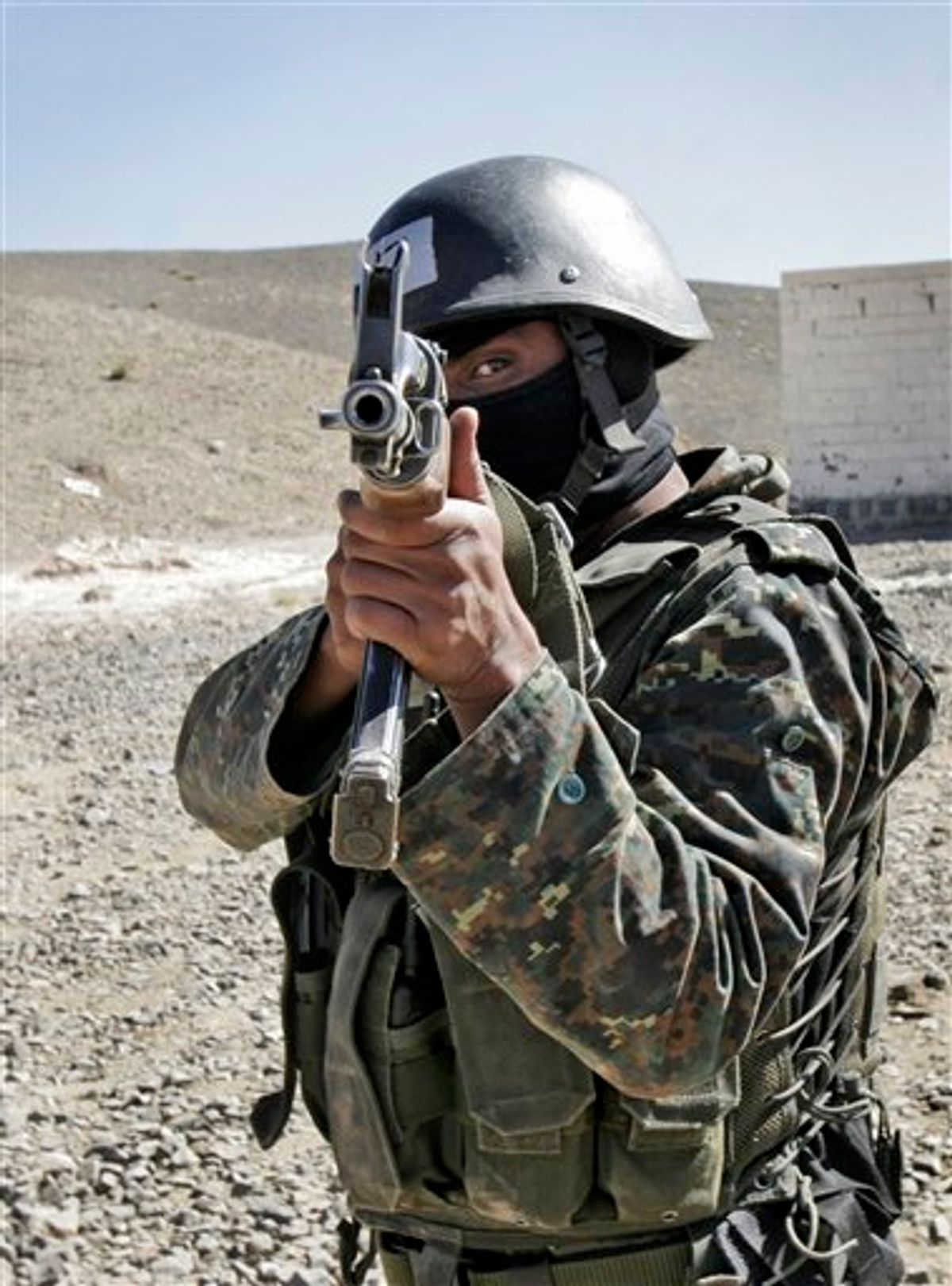 An anti-terrorist unit from the Central Security Forces of the Ministry of Interior trains in the Sarif area on the eastern outskirts of the capital San'a, in Yemen Wednesday, Jan. 6, 2010. Yemeni security forces arrested three suspected al-Qaida militants from a cell that the U.S. has said was linked to a plot against the American or other embassies, the Interior Ministry said Wednesday. (AP Photo) (AP)
--

The Washington Post's Dana Priest today reports that "U.S. military teams and intelligence agencies are deeply involved in secret joint operations with Yemeni troops who in the past six weeks have killed scores of people."  That's no surprise, of course, as Yemen is now another predominantly Muslim country (along with Somalia and Pakistan) in which our military is secretly involved to some unknown degree in combat operations without any declaration of war, without any public debate, and arguably (though not clearly) without any Congressional authorization.  The exact role played by the U.S. in the late-December missile attacks in Yemen, which killed numerous civilians, is still unknown.

But buried in Priest's article is her revelation that American citizens are now being placed on a secret "hit list" of people whom the President has personally authorized to be killed:

After the Sept. 11 attacks, Bush gave the CIA, and later the military, authority to kill U.S. citizens abroad if strong evidence existed that an American was involved in organizing or carrying out terrorist actions against the United States or U.S. interests, military and intelligence officials said. . . .

The Obama administration has adopted the same stance. If a U.S. citizen joins al-Qaeda, "it doesn't really change anything from the standpoint of whether we can target them," a senior administration official said. "They are then part of the enemy."

Both the CIA and the JSOC maintain lists of individuals, called "High Value Targets" and "High Value Individuals," whom they seek to kill or capture.  The JSOC list includes three Americans, including [New Mexico-born Islamic cleric Anwar] Aulaqi, whose name was added late last year. As of several months ago, the CIA list included three U.S. citizens, and an intelligence official said that Aulaqi's name has now been added.

Indeed, Aulaqi was clearly one of the prime targets of the late-December missile strikes in Yemen, as anonymous officials excitedly announced -- falsely, as it turns out -- that he was killed in one of those strikes.

Just think about this for a minute.  Barack Obama, like George Bush before him, has claimed the authority to order American citizens murdered based solely on the unverified, uncharged, unchecked claim that they are associated with Terrorism and pose "a continuing and imminent threat to U.S. persons and interests."  They're entitled to no charges, no trial, no ability to contest the accusations.  Amazingly, the Bush administration's policy of merely imprisoning foreign nationals (along with a couple of American citizens) without charges -- based solely on the President's claim that they were Terrorists -- produced intense controversy for years.  That, one will recall, was a grave assault on the Constitution.  Shouldn't Obama's policy of ordering American citizens assassinated without any due process or checks of any kind -- not imprisoned, but killed -- produce at least as much controversy?

Obviously, if U.S. forces are fighting on an actual battlefield, then they (like everyone else) have the right to kill combatants actively fighting against them, including American citizens.  That's just the essence of war.  That's why it's permissible to kill a combatant engaged on a real battlefield in a war zone but not, say, torture them once they're captured and helplessly detained.  But combat is not what we're talking about here.  The people on this "hit list" are likely to be killed while at home, sleeping in their bed, driving in a car with friends or family, or engaged in a whole array of other activities.  More critically still, the Obama administration -- like the Bush administration before it -- defines the "battlefield" as the entire world.  So the President claims the power to order U.S. citizens killed anywhere in the world, while engaged even in the most benign activities carried out far away from any actual battlefield, based solely on his say-so and with no judicial oversight or other checks.  That's quite a power for an American President to claim for himself.

As we well know from the last eight years, the authoritarians among us in both parties will, by definition, reflexively justify this conduct by insisting that the assassination targets are Terrorists and therefore deserve death.  What they actually mean, however, is that the U.S. Government has accused them of being Terrorists, which (except in the mind of an authoritarian) is not the same thing as being a Terrorist.  Numerous Guantanamo detainees accused by the U.S. Government of being Terrorists have turned out to be completely innocent, and the vast majority of federal judges who provided habeas review to detainees have found an almost complete lack of evidence to justify the accusations against them, and thus ordered them released.  That includes scores of detainees held while the U.S. Government insisted that only the "Worst of the Worst" remained at the camp.

No evidence should be required for rational people to avoid assuming that Government accusations are inherently true, but for those do need it, there is a mountain of evidence proving that.  And in this case, Anwar Aulaqi -- who, despite his name and religion, is every bit as much of an American citizen as Scott Brown and his daughters are -- has a family who vigorously denies that he is a Terrorist and is "pleading" with the U.S. Government not to murder their American son:

His anguish apparent, the father of Anwar al-Awlaki told CNN that his son is not a member of al Qaeda and is not hiding out with terrorists in southern Yemen.

"I am now afraid of what they will do with my son, he's not Osama Bin Laden, they want to make something out of him that he's not," said Dr. Nasser al-Awlaki, the father of American-born Islamic cleric Anwar al-Awlaki. . . .

"I will do my best to convince my son to do this (surrender), to come back but they are not giving me time, they want to kill my son.  How can the American government kill one of their own citizens?  This is a legal issue that needs to be answered," he said.

"If they give me time I can have some contact with my son but the problem is they are not giving me time," he said.

Who knows what the truth is here?  That's why we have what are called "trials" -- or at least some process -- before we assume that government accusations are true and then mete out punishment accordingly.  As Marcy Wheeler notes, the U.S. Government has not only repeatedly made false accusations of Terrorism against foreign nationals in the past, but against U.S. citizens as well.  She observes:  "I guess the tenuousness of those ties don’t really matter, when the President can dial up the assassination of an American citizen."

A 1981 Executive Order signed by Ronald Reagan provides: "No person employed by or acting on behalf of the United States Government shall engage in, or conspire to engage in, assassination."  Before the Geneva Conventions were first enacted, Abraham Lincoln -- in the middle of the Civil War -- directed Francis Lieber to articulate rules of conduct for war, and those were then incorporated into General Order 100, signed by Lincoln in April, 1863.  Here is part of what it provided, in Section IX, entitled "Assassinations":

The law of war does not allow proclaiming either an individual belonging to the hostile army, or a citizen, or a subject of the hostile government, an outlaw, who may be slain without trial by any captor, any more than the modern law of peace allows such intentional outlawry; on the contrary, it abhors such outrage. The sternest retaliation should follow the murder committed in consequence of such proclamation, made by whatever authority. Civilized nations look with horror upon offers of rewards for the assassination of enemies as relapses into barbarism.

Can anyone remotely reconcile that righteous proclamation with what the Obama administration is doing?  And more generally, what legal basis exists for the President to unilaterally compile hit lists of American citizens he wants to be killed?

What's most striking of all is that it was recently revealed that, in Afghanistan, the U.S. had compiled a "hit list" of Afghan citizens it suspects of being drug traffickers or somehow associated with the Taliban, in order to target them for assassination.  When that hit list was revealed, Afghan officials "fiercely" objected on the ground that it violates due process and undermines the rule of law to murder people without trials:

Gen. Mohammad Daud Daud, Afghanistan's deputy interior minister for counternarcotics efforts, praised U.S. and British special forces for their help recently in destroying drug labs and stashes of opium. But he said he worried that foreign troops would now act on their own to kill suspected drug lords, based on secret evidence, instead of handing them over for trial.

"They should respect our law, our constitution and our legal codes," Daud said. "We have a commitment to arrest these people on our own" . . . .

Ali Ahmad Jalali, a former Afghan interior minister, said that he had long urged the Pentagon and its NATO allies to crack down on drug smugglers and suppliers, and that he was glad that the military alliance had finally agreed to provide operational support for Afghan counternarcotics agents. But he said foreign troops needed to avoid the temptation to hunt down and kill traffickers on their own.

"There is a constitutional problem here. A person is innocent unless proven guilty," he said. "If you go off to kill or capture them, how do you prove that they are really guilty in terms of legal process?" . . .

So we're in Afghanistan to teach them about democracy, the rule of law, and basic precepts of Western justice.  Meanwhile, Afghan officials vehemently object to the lawless, due-process-free assassination "hit list" of their citizens based on the unchecked say-so of the U.S. Government, and have to lecture us on the rule of law and Constitutional constraints.  By stark contrast, our own Government, our media and our citizenry appear to find nothing wrong whatsoever with lawless assassinations aimed at our own citizens.  And the most glaring question for those who critized Bush/Cheney detention policies but want to defend this:  how could anyone possibly object to imprisoning foreign nationals without charges or due process at Guantanamo while approving of the assassination of U.S. citizens without any charges or due process?

UPDATE:  In comments, sysprog documents the numerous countries condemned in 2009 by the U.S. State Department for "extra-judicial killings."  I trust that it goes without saying that it's different (and better) when we do it than when They do it, because we're different (and better), but it still seems worth noting.

UPDATE II:  James Joyner argues that this "hit list" policy is not much different than our drone attacks in Pakistan, which Obama has substantially escalated, and that "no one seems to be complaining about the President's authority" to kill suspected Terrorists there.  Actually, there are substantial questions about the legality of those drone attacks, though the complete secrecy behind which the program operates makes those questions very difficult to address.  Beyond that, though, there's a substantial difference between a government which (a) targets foreign nationals whom it claims are part of a enemy organization and (b) targets its own citizens for assassination without any due process.  They both have substantial legal and moral problems, and killing innocent foreigners is obviously no better than killing one's own innocent citizens, but (a) is at least a fairly common act of war, whereas (b) -- as the U.S. Government itself has long argued -- is a hallmark of tyranny.  There's a much greater danger from allowing a government to target its own citizens for extra-judicial killings.