There she still is: Miss America

The crown may have faded, but the beauty queen dream isn't dead 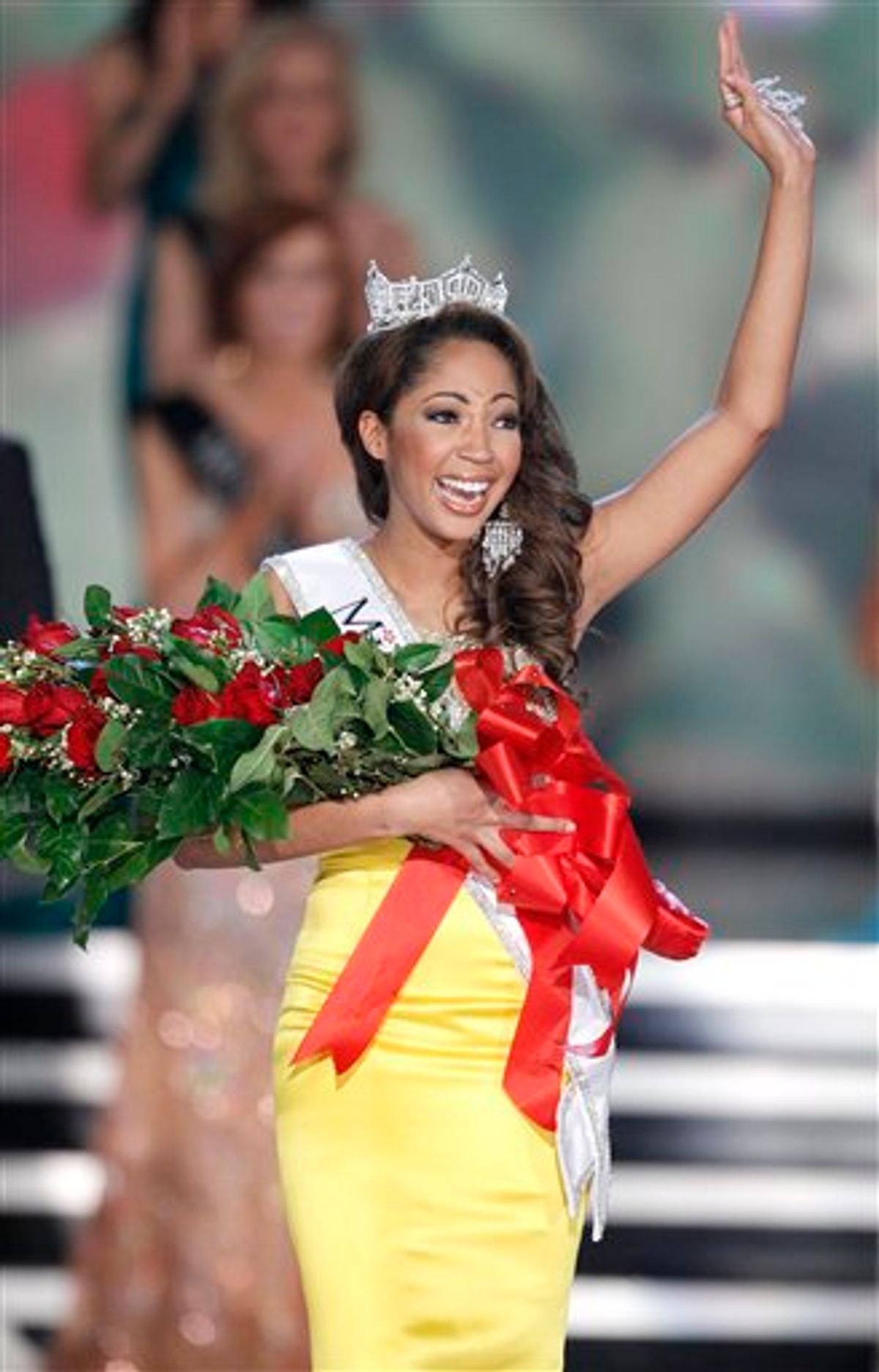 You know how sometimes you hear a story about a faded celebrity and think, "I didn't even know he was still alive?" That's how we here at Broadsheet felt when we heard that Caressa Cameron of Virginia had been crowned Miss America over the weekend.  They still do that?

Like the dowager queen of a declining empire, her highness's sphere of influence has in recent years been steadily diminishing. The televised competition for the crown, which once drew over 26 million viewers, last year netted only a paltry 3.5 million. The Super Bowl of beauty, it hasn't aired on a major network in ages. (Saturday's broadcast aired on TLC --  the network that is, uncoincidentally, home to the creepfest known as "Toddlers and Tiaras.")

Although her decline has been more dramatic in the last few years, Miss America can trace her downfall all the way to July 23, 1984. That's when the reigning (and first African-American) queen, Vanessa Williams, resigned in the wake of a nude photo scandal. Her first runner-up, Suzette Charles, briefly became the new Miss America, but it was Williams who emerged the victor. After doing penance as a punch line for a few years, Williams went on to have a hugely successful career as a singer and actress. Meanwhile, those naked photos -- grainy, sexy and occasionally Sapphic -- were everywhere. They ran in Penthouse, twice. They were plastered in the windows of little punk rock boutiques. And they marked a turning point for the pageant, shattering its wholesome facade as merely "the world's leading provider of scholarships for women" and revealing with brutal clarity its long unspoken other purpose -- as a televised clash of the hotties.

In the ensuing 25 years, Miss America's role as our sneaky source of prime-time titillation has become even less relevant. Who needs a parade of comely beauties in evening gowns answering current events questions when we can cut to the chase with the Victoria's Secret fashion show? If you want cutthroat competition, there's "Survivor." If you just want to get your spank on, well, that’s why the Internet was invented. And while the wide world of beauty competition does still reliably provide us with opportunities to make sport of dumb blondes, it's not like we're hurting for women we can love to hate.

And yet, in spite of the loss of luster, the truly amazing thing about Miss America is that she refuses to completely die out.

Other vestiges of the 20th century -- land lines, film and our attention spans -- are long a thing of the past, but at 89, the pageant still endures. Its move to TLC makes abundantly clear that its role as an innocent slice of cheesecake is no longer needed. But while the Snookies and the supermodels of the world may more shamelessly hog the limelight, cable audiences still want to watch the damn thing. The pageantry industry itself remains surprisingly robust. And little girls, like the ones in TLC's "Toddlers and Tiaras," still parade themselves in ruffly dresses and dream of one day having Mario Lopez announce that a panel of judges that includes Rush Limbaugh has anointed them the ne plus ultra of American femininity.

And so the dream persists. The new Miss America herself, Caressa Cameron, who won after belting out "Listen" from "Dreamgirls" and declaring that her mission this year will be to raise awareness about AIDS and HIV, told reporters this weekend that, "It was like God’s will for me to be Miss America at this time, and I’m so excited and so blessed to be." Frankly, I'd prefer that young women of achievement earn their $50,000 scholarships without having to show off their bikinis, and I'd like to think they can work for charitable causes without needing Vivica A. Fox's approval. It pisses me off that the judging of women on their physical attributes still gets gussied up in the name of higher education and good works. But when you consider that being born with a uterus in this country is a pretty much surefire guarantee that you'll spend your formative years being deluged with princess regalia, you can understand the stubborn persistence of such an otherwise outdated form of monarchy. I have daughters. They have crowns. And as long as people keep handing them out to little girls, little girls are going to grow up wanting to wear them.