Best of Sundance: Year of the woman 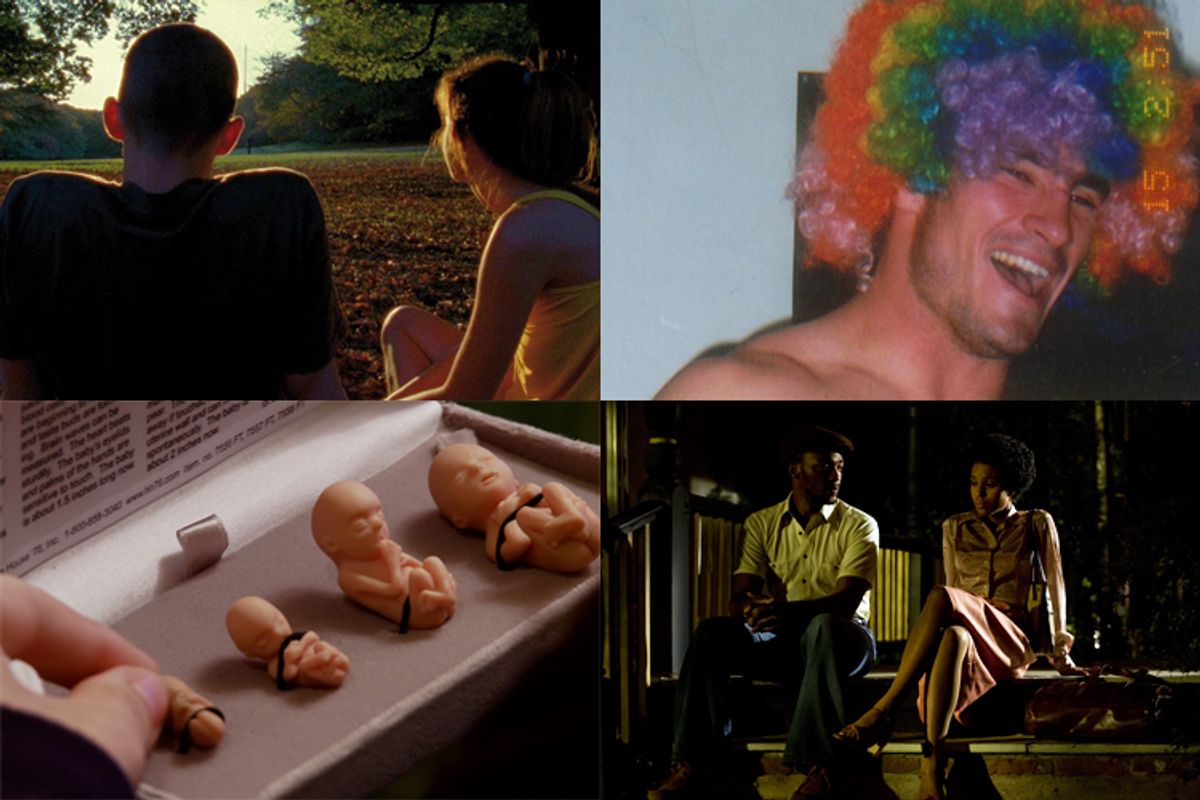 If this year's Sundance Film Festival made extravagant and exaggerated claims about returning to its pseudo-rebellious roots, there was one seismic shift at Robert Redford's winter film showcase that went almost unnoticed. In recent years, female filmmakers have been catching up in the indie sector, if not quite to full equity and parity then to the point where a woman directing a film is no longer any kind of newsworthy event. Roughly one in three features at Sundance 2010 were made by women, but I haven't parsed the statistics to learn whether that's an all-time high, and in any case that's not the news.

As if anticipating Kathryn Bigelow's looming slew of Oscar nominations, this was the year when female directors dominated Sundance, making all kinds of movies in various genres and settings: rock 'n' roll biopics (Floria Sigismondi's "The Runaways" and Sam Taylor-Wood's "Nowhere Boy"), regional dramas rooted in time and place (Tanya Hamilton's "Night Catches Us" and Debra Granik's "Winter's Bone"), contemporary comedies of manners (Nicole Holofcener's "Please Give" and Lisa Cholodenko's "The Kids Are All Right").

On my next-to-last night in Park City, I had a long conversation about this topic with a female film executive who argued that all these films (and many others besides) do reflect a distinctively female vision and couldn't have been made by men. I tend to resist such essentialist generalizations -- let's remember that men wrote "A Doll's House" and "All About Eve" -- but the question is too complicated for a yes-or-no answer. Contemporary female filmmakers have (mercifully) broken free of the rom-com and Nancy Meyers formulas, but that doesn't mean they see the world, or the overwhelmingly man-centric tradition of cinema, the same way their male counterparts do. Let a thousand dissertations go forth!

Sundance handed out its awards on Saturday night, where the big jury prize for narrative film went to "Winter's Bone" (about which more below) and the documentary prize went to Sebastian Junger and Tim Hetherington's Afghan-war film "Restrepo," which I haven't seen. Now it's my turn. Combing indiscriminately from all Sundance categories -- I don't care whether these movies were in the official competitions or not -- I've picked a favorite narrative feature and favorite doc, along with an assortment of can't-miss titles in both groups. Most if not all of these should be reaching you during the coming year ahead, whether on a theater screen or on DVD or delivered to the iPad you don't own yet or through some other mechanism that won't be invented until next month.

BEST NARRATIVE FEATURE: "Night Catches Us" I can't tell if I'm grading on a curve here, because director Tanya Hamilton took a full decade to get this smoldering, low-budget tragic romance made and because its subject -- urban America in the Jimmy Carter era -- lies close to my own experience and my own heart. I also don't care, because Hamilton's yarn about a pair of one-time Black Panther activists (Anthony Mackie and Kerry Washington) who reunite in a struggling Philadelphia neighborhood during the election summer of 1976 is both archetypal and highly specific, and sounds an eerily resonant chord in the age of Obama. Passionate and tense, with marvelous acting from the two leads and a composure that belies the tiny budget and rushed production (which took 18 days!). No distributor has bitten yet, but even though "Night Catches Us" has little in common with "Precious," that movie proved that mainstream audiences are finally open to black-oriented subject matter and a black director.

"Winter's Bone" The Sundance jury awarded its grand prize to this rural Missouri thriller -- imagine "The Sopranos," transposed to the Ozarks, with a teenage female protagonist -- from director Debra Granik, and it's no wonder. Jennifer Lawrence gives a starmaking performance as the indomitable Ree, supported by John Hawkes as her terrifying but resolute ex-convict Uncle Teardrop.

"Enter the Void" Nobody's gonna be neutral on French director Gaspar Noe's hallucinogen-infused journey between life and death, in which a young American drug dealer shot down in a Tokyo nightclub travels through the stages of the "Tibetan Book of the Dead." Love, hate, disgust, arousal, amazement -- all are appropriate reactions to one of the most mind-blowing and ambitious feature films ever made. (IFC will distribute.)

"The Kids Are All Right" Lisa Cholodenko's lesbian-marriage comedy, with Julianne Moore and Annette Bening as the middle-aged L.A. couple suddenly confronted with the rakish dude (Mark Ruffalo) whose zygotes helped spawn their two children, was probably the festival's biggest hit. Focus Features acquired it for a reported $5 million, so they'll be looking for a commercial breakout and possible 2011 awards gold.

"Blue Valentine" Ryan Gosling and Michelle Williams play a working-class couple whose marriage has gone badly off the rails in this beautifully constructed and unflinching drama from director Derek Cianfrance. Given the quality of the performances and the photography, I don't think "Blue Valentine" delivers as clean a narrative payoff as it should, but it's a distinctive and daring work of American cinema. Weinstein will distribute.

"I Am Love" Among the most un-Sundancey films imaginable, Italian director Luca Guadagnino's family melodrama stars Tilda Swinton (who also produced) as a Russian émigré trophy wife in an upper-crust Milanese manufacturing family. She falls hard for her son's best friend, in a soapy but compelling Chatterley-style romance that's deliberately shot in the style of early-'70s Italian film, and specifically of Luchino Visconti. An absolutely stunning visual experience, with surprising emotional power and one of Swinton's very best performances.

"Nowhere Boy" Another John Lennon biopic? Yeah, and a surprisingly restrained one from British artist-turned-filmmaker Sam Taylor-Wood, focused on the teenage Lennon's relationship with his seductive but thoroughly unreliable mother (Anne-Marie Duff) and his severe, upright but loving Aunt Mimi (wonderfully rendered by Kristin Scott Thomas). Some critics have viewed Aaron Johnson's almost thuggish performance as the future Beatle sternly, but it accords with Lennon's (and other people's) later descriptions of himself as an angry, undisciplined kid.

"Four Lions" This is the ruthless "terrorist comedy" about a quartet of hapless Muslim jihadis from the English Midlands, directed and co-written by Anglo television provocateur Chris Morris. Does this qualify as great cinema? Probably not, but its premiere was among Sundance's biggest conversation-starters, and Morris genuinely intends this button-pusher to force us to rethink many of our ideas about Islam, terrorism and the unifying force of Western consumer culture.

Films I didn't see but should have: Michael Winterbottom's controversial, ultra-violent Jim Thompson adaptation "The Killer Inside Me," Joseph Gordon-Levitt as an unkempt, anarchistic grief counselor in "Hesher."

BEST DOCUMENTARY: "12th & Delaware" This taut, haunting and rigorous cinéma-vérité work from "Jesus Camp" directors Heidi Ewing and Rachel Grady follows the dramas on one street corner in Fort Pierce, Fla., where an abortion clinic and an antiabortion "crisis pregnancy center" face each other. It's just a pair of one-story buildings in an undistinguished suburban neighborhood, but what happens inside and between them distills the hottest-button political issue in American life down to human essentials -- and to an eerie, gripping narrative that almost resembles a film noir. There is no narrator, no talking-head interviews and a bare minimum of on-screen information, and while I can guess where Ewing and Grady fall on the abortion issue, their protagonists appear as complicated individuals, not heroes or villains. The doctor who performs abortions is whisked in and out of the clinic under a bedsheet (in very real fear for his life), while across the street the woman who runs the antiabortion center tries to keep girls and women away from him. Whichever side of the street you stand on, "12th & Delaware" will remind you that the abortion issue is about those women and girls, the true subjects of Ewing and Grady's film, as they stand on the precipice of a life-altering decision.

"The Tillman Story" Amir Bar-Lev's documentary goes some distance toward rescuing Pat Tillman, the former NFL star killed in Afghanistan by friendly fire, from the right-wing, pro-military recruiting poster he became after his death. More subtly, Bar-Lev also holds up Tillman and his remarkable family as exemplars of a set of American virtues -- curiosity, generosity, open-minded intelligence, resistance to ideology -- that seem all but extinct.

"Catfish" Undoubtedly the biggest sensation of the festival, but I can only hint at why without giving away the secrets of Henry Joost and Ariel Schulman's film. So let's hint: The New York filmmaking duo begin idly following Schulman's brother Yaniv after he strikes up an odd Internet relationship with an 8-year-old artist in Michigan named Abby, and then an even more intense one with Megan, Abby's smokin' adult older sister. But who are these people really? The filmmakers' road trip to Michigan reveals the truth, which is startling but ultimately also kind of wonderful.

"Casino Jack and the United States of Money" Oscar winner Alex Gibney ("Taxi to the Dark Side," "Enron: The Smartest Guys in the Room") returns with another excoriation of American corruption, this time viewing the political system through the outlandish story of Jack Abramoff, the one-time star lobbyist now in federal prison. As Gibney sees it, Abramoff is no "bad apple," but rather the ultimate expression of a right-wing, free-market revolution that has transformed politics into a money war.

"Freedom Riders" Think you're not interested in another civil rights doc? Think again. Director Stanley Nelson has built his career on illuminating the darker corners of American history on race and racism, and if "Jonestown" remains his masterpiece, this chronicle of the "freedom rides" of 1961, when a fearless, multiracial group of bus passengers literally risked their lives in a direct challenge to Jim Crow laws, lends a nuanced, 21st-century perspective to a hair-raising and inspiring story.

"Exit Through the Gift Shop" This wry, comic, too-crazy-for-fiction film debut from faceless British street artist Banksy offers a casual history of his own guerrilla-art movement and its major figures. But it's mostly a meta-movie about Thierry Guetta, a French-born L.A. entrepreneur who transforms himself, with Banksy's unwitting support, into the pop-art phenomenon known as Mr. Brainwash. A deceptively casual meditation on the corner into which art has painted itself, in the age of 24/7 celebutainment and Internet democracy.

"Bhutto" A polyphonic history doc that's too dense to be fully coherent, Jessica Hernández and Johnny O'Hara's film biography of assassinated Pakistani leader Benazir Bhutto nonetheless hits its mark, painting Bhutto as a figure of epic complexity and unique tragic-historic importance. Was she a feminist pioneer, a populist demagogue, the scion of a corrupt family dynasty or (quite plausibly) all three things in varying degrees at different moments? One thing is for sure: Bhutto represents the road not taken in Pakistan's troubled history.

Films I didn't see but should have: Junger and Hetherington's award-winning Afghan odyssey "Restrepo," Davis Guggenheim's dissection of public education and its discontents in "Waiting for Superman," Danish journalist-prankster Mads Brügger's "cultural exchange" journey to North Korea in "The Red Chapel."